Military Wiki
Register
Don't have an account?
Sign In
Advertisement
in: Articles incorporating text from Wikipedia, Conflicts in 1950, Naval battles of the Korean War involving the United States,
and 2 more

The Action of 12 October 1950 was a battle fought during the Korean War. While conducting Operation Wonsan against sea mines in Wonsan Harbor, a squadron of US Navy warships was attacked by North Korean Army (KPA) batteries. During the operation, two US ships struck mines and sank while the remaining vessels and aircraft silenced the enemy guns.[2]

The KPA fired on American survivors in the water, wounding several men. In addition, the action prompted the United States Navy to begin the construction of hundreds of minesweepers for use in the conflict. It also gave the Americans an incentive to take a more aggressive stance by blockading Wonsan.[2]

On October 10, Lieutenant Commander Bruce Hyatt was leading a force of one destroyer, USS Endicott and five minesweepers on a minesweeping patrol off Wonsan. The five minesweepers were the USS Pirate as flagship, USS Incredible, USS Kite, USS Redhead and USS Pledge, all similarly armed and built during World War II. On the morning of October 12, the formation was steaming in a channel between the islands of Rei-To and Soku-Semu when at 11:12 am, the warships changed course to 258 degrees into unswept waters. The channel is 2,000 yards (1,800 m) wide and 14 miles (23 km) long.[2]

At 11:54 five contact mines were discovered in intervals of 50 yards (46 m) and disposed of. Six minutes later at 12:01, a helicopter from the Endicott reported that there were three lines of mines off Rei-To, Soku-Semu, Koto and Roto. The specific position of the mines was not clarified but still the American vessels altered their intended course and headed for the field. Due to the threat of contact, Lieutenant Commander Hyatt ordered his ships to battle stations and the crews to disperse themselves evenly across the ships in order to minimize casualties caused by an explosion.[2]

While making the wide turn into the direction of the mines, USS Pirate struck a mine at 12:09 along frame sixty-two on the starboard side. A giant column of water was sent up and at the same time the North Korean shore batteries from Kei-To and Soku-Semu began to shoot shells at the stricken ship. As soon as the communists engaged, the Endicott and the remaining minesweepers returned fire on at least three separate batteries.[2]

Pirate began listing to port at about twenty degrees and when it reached fifteen, Lieutenant Cornelius E. McMullen ordered the evacuation of his ship. Within four minutes, the Pirate was hit, capsized and sank completely, taking down six enlisted men. Around sixty men went adrift, some in life rafts. At 12:04, just as the minesweeper turned over, the shore batteries resumed their shooting, this time on the sailors in the water.[2]

Because of the accurate battery fire, the American ships could not achieve a complete rescue of the survivors for over four hours. Dozens of the adrift men were wounded by shrapnel and one man was killed. Five minutes after the Pirate was hit, the Pledge was engaged in a gunnery duel with one of the batteries. Simultaneously, the Pledge was hit by an artillery shell and struck a mine. Her commander, Lieutenant Richard O. Young, ordered his men to seal hatches and save the ship but about forty-five minutes later the crew abandoned the vessel and the Pledge was underwater. Five men were killed.[2]

The KPA shore batteries were eventually silenced after several hours of fighting, enabling the American rescue of the remaining survivors. USS Redhead was heavily damaged in the battle; she received several hits from the batteries while rescuing survivors from both the Pirate and the Pledge. A total of twelve United States Navy sailors were killed in action and at least forty-three were wounded.[2]

Attempts were made to salvage the Pirate but failed so explosives were placed in her wreck and detonated to prevent communist forces from recovering any classified material.[3] Additional aircraft and boats from other nearby warships arrived at the area after the action to help in the rescue operations.[2] The USS Pirate, the Pledge and the Redhead each received the Presidential Unit Citation and their commanders were awarded the Silver Star for bravery. USS Partidge was mined off Wonsan on February 2 and became the last American vessel to be destroyed during operations in that area. Sometime in 1952, Lieutenant McMullen received an anonymous package containing the Pirate's battle flag and on May 28, 1985 it was donated to the Naval Historical Center and is on display at the Korean War exhibit.[1][4][5][6]

A map of the Clearance of Wonsan operation. 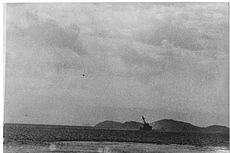 Boats and sailors of the Endicott while rescuing survivors.