The Kalashnikov AK-12 and AK-15 are derived from the AK-400 (Base Prototype).[4] They are the newest derivative of the Russian AK-Pattern series of assault rifles and was proposed for possible general issue to the Russian Army. The rifles are intended to eventually replace previous generations of Kalashnikov assault rifles in service with Russian Military and Governmental forces.[5]

The AK-12 project commenced in 2011 by IZHMASH factory (now part of the “Kalashnikov” concern) as a private venture, in an attempt to participate in the “Ratnik” trials which were held by the Russian army.[5] Throughout its development and evaluation stage it has received multiple modifications to meet the Russian Military's standard, as well as to improve upon the "range of defects" that was discovered on the earlier prototype models and to addresses the Russian Army’s concerns regarding the former AK-12’s cost.

On May 25, 2010, Russia’s media published a Russian Defence Ministry statement that the AK-12 rifle was to be tested in 2011. The demonstration model (AK-200), presented to Russian Prime Minister Vladimir Putin during his official visit to inspect the products of the Izhmash arms manufacturing plant in Izhevsk, was apparently a basic AK-74 in standard 5.45×39mm caliber. On the demonstrator, the traditional locations of cocking handle, safety lever and fire selector remained unchanged, but the AK-12 production model featured revisions to all of these features. The Izhmash demonstrator was fitted with the large-capacity 60-round casket magazine. In January 2012, the Russian Deputy Defense Minister announced that the Russian Army would not be buying the AK-12, as they had millions of surplus AK-74 rifles, and over concerns of the financial state of Izhmash. Despite this, Russia began trials of the rifle on November 2, 2012. It was tested for its effectiveness when exposed to freezing cold, desert heat, humidity, dust, and impacts.[6] By November 23, trials were about 80 percent complete. During these initial tests, the AK-12 was found to have a "range of defects." The specific problems were not revealed, as they were considered "the developer's confidential information". Izhmash reported that the faults were fixable, and that the trials precisely highlighted weaknesses in the design for changes to be incorporated.[7] Preliminary tests of the AK-12 were completed on November 30, 2012. Izhmash worked to fix problems with the rifle that occurred during the trials. Even though the Russian Army stated they will not introduce a new rifle in the near future, state acceptance trials were to begin in June 2013,[8] and conclude by mid-2013. Series production was due to begin by the end of 2013.[9] Izhmash prepared 30 prototypes for state trials. The company has the capacity to produce 1 million rifles per year for buyers.[10]

On 16 September 2013, the Deputy Chairman of the Military-Industrial Commission of Russia said the Russian Army would start receiving AK-12 assault rifles chambered in 5.45 mm and 7.62 mm in 2014. The new rifle would be put into service along with new handguns, machine guns, and sniper rifles. The AK-12 basic platform allows for nearly 20 different modifications to change into other configurations. State trials were to begin in fall 2013.[11] However, on 23 September 2013, the "Izvestiya" tabloid wrote that, according to an anonymous source, the AK-12 will not be adopted or even undergo state tests due to shortcomings in preliminary tests.[12][13] The AK-12 was to replace three previous AK models and standardize assault rifles in the Russian military. The government rejection of the AK-12 was because senior commanders said they had millions of stockpiled AK-74 models and didn't need a new rifle. Trials will continue for law enforcement agencies.[14]

In response to the government's passing of the AK-12, Kalashnikov Concern (formerly Izhmash) is planning to develop an AK-74 modernized main battle rifle for the Defense Ministry and Russian Army, although there have been no official announcements concerning AK-74 modernization. A modernized AK-74 model would also be available for export, especially to the United States, where the company has its largest civilian firearms market.[14] However, on 16 July 2014 U.S. President Barack Obama signed an Executive Order banning the importation of Russian-made firearms into the United States in response to Russian military intervention in Ukraine.[15][16]

On 23 December 2014, the Russian Army announced that the AK-12, as well as the A-545, had passed state trials and would be accepted into service with operational units for evaluation. It is expected that both weapons will begin being trialed operationally by Russian forces by March 2015.[17]

On September 6, 2016, it was reported that Kalashnikov replaces the old prototype AK-12 with a new AK-12 base from the well proven AK-400 (Base Prototype). A final production model was introduced, chambered in 5.45x39mm (AK-12) and 7.62x39mm (AK-15), as well as a new squad automatic weapon, based on the traditional Kalashnikov layout and design, it has several novel technical and ergonomic features derived from the AK-12 program,[18] the RPK-16. It was also reported that the new AK-12 is already undergoing troop trials with the Russian Army, where it competes against the Degtyarov A-545 balanced action rifle.[19] There is still no final word given by Russian MoD about the final fate of the AK-12 and AK-15 rifles regarding their results in the “Ratnik” trials, but their chances are considered to be rather good.[5]

The AK-12 uses the same gas-operated long-stroke piston system of previous Kalashnikov rifles, but many features are radically different from other guns in its family. The light version has the ability to change calibers by swapping barrels. The standard caliber is 5.45×39mm and can be changed to 7.62×39mm and 5.56×45mm. Other intermediate calibers are expected. The heavy version will fire the larger 7.62×51mm NATO cartridge. It is fed through standard AK-74M 30-round magazines and can accept RPK-74 45-round magazines. The 7.62 Soviet-chambered version is compatible with AKM/RPK 30-round and 40-round magazines and 75-round drums. Magazines specifically for the AK-12 under development include a 30-round magazine with bolt-catch actuator, a 60-round quad-stack magazine, and a 95-round drum.[20]

The AK-12 is very different from its predecessors ergonomically. The stock is telescoping and in-line with the barrel for better recoil control. It also features a stock latch on the stock itself, allowing for it to be folded to either side of the rifle. It has a rubber height-adjustable cheek piece and butt plate. The cocking handle is moved forward and can be attached to both sides for ambidextrous use. The receiver is hinged and more rigid with a Picatinny rail for mounting optics. There are several other accessory rails on the weapon, including on both sides and the bottom of the handguard, on top of the handguard (in-line with the receiver for a longer monolithic rail), and on top of the gas block. A lug under the gas chamber can mount a GP-34 grenade launcher, and one under the front sight holder mounts a bayonet. The rear iron sight is further back on the receiver and can be set for aiming when the stock is extended or folded. The magazine release is in the same position but can be used by the trigger finger to detach magazines. In a departure from previous AK-type rifles, the dust cover safety selector has been replaced with an ambidextrous fire selector; it has four positions for safe, semi-automatic, three-round burst fire, and fully automatic fire.Other improvements include a smaller ejection port, more ergonomic pistol grip, improved rifling, and a muzzle brake with a 22 mm threading that can fire NATO standard rifle grenades.[20][21]

The new AK-12 and AK-15 has retained the long-stroke piston balanced gas-operating scheme with rotating bolt of the basic model. The AK-12 and AK-15 features a Picatinny rail for optical/red dot scopes on the upper receiver, a handguard with ventilation holes, an advanced muzzle brake, an ergonomic pistol grip, and a retractable folding stock. The rifle can be fitted with a suppressor or 40mm GP-25/GP-34 single-shot underbarrel grenade launcher.

The new rifle addresses the Russian Army’s concerns regarding the AK-12’s cost and issues in fully automatic fire and is expected to be much cheaper to build than the previous model. It incorporates many of the same improvements developed for the previous AK-12 model, but improves the strength and resilience of some of the components.[19]

The new AK-12’s design shares more in common with the existing AK-74 than its predecessor, but it will not be a retrofit to existing rifles. Several improvements were made to the rifle’s receiver, such as an improved and far more rigid top cover interface and a new free-floated barrel. The new AK-12 reportedly outperforms the existing AK-74 by at least the margin requested by the Russian government. The 5.45x39mm AK-12 appears to also be accompanied by the 7.62x39mm caliber AK-15, evidently of similar design.[19]

The AK-12 and AK-15 have a cyclic rate of fire of 700 rounds per minute (RPM), which is 50 rounds faster than the older Kalashnikov Assault Rifles and the older prototypes of the AK-12. The three round burst feature from the prototype model also got reduced to a 2 round burst in the new AK-12 production model. 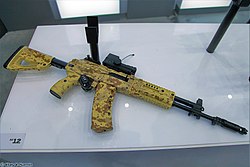 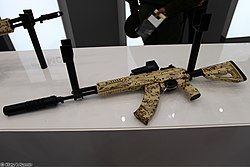 The final production model of the AK-12.

The final production model of the AK-12 and AK-15.

The final production model of the AK-12.

The fire selector of the final production model of the AK-12.

The early proposed prototype model of the AK-12.

The early proposed prototype model of the AK-12 (Left Side). Note the ambidextrous ejection port and reversible cocking handle above the vertical foregrip.

The early proposed prototype model of the AK-12 with various accessories. 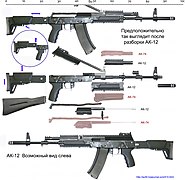