The AGM-65 Maverick is an air-to-ground missile (AGM) designed for close air support. It is the most widely produced precision-guided missile in the Western world,[4] and is effective against a wide range of tactical targets, including armor, air defenses, ships, ground transportation and fuel storage facilities.

Development began in 1966 at Hughes as the first missile to use an electronic contrast seeker. It entered service with the United States Air Force in August 1972. Since then, it has been exported to more than 30 countries and is certified on 25 aircraft.[5] The Maverick served during the Vietnam, Yom Kippur, Iran–Iraq, and Persian Gulf Wars, along with other smaller conflicts, destroying enemy forces and installations with varying degrees of success.

Since its introduction into service, numerous Maverick versions had been designed and produced using electro-optical, laser, and imaging infrared guidance systems. The AGM-65 has two types of warhead: one has a contact fuze in the nose, the other has a heavyweight warhead fitted with a delayed-action fuze, which penetrates the target with its kinetic energy before detonating. The missile is currently produced by Raytheon Missile Systems.

The Maverick shares the same configuration as Hughes's AIM-4 Falcon and AIM-54 Phoenix, and measures more than 2.4 m (8 ft) in length and 30 cm (12 in) in diameter.

The Maverick's development history began in 1965, when the United States Air Force (USAF) began a program to develop a replacement to the AGM-12 Bullpup.[6] With a range of 16.3 km (8.8 nmi), the radio-guided Bullpup was introduced in 1959 and was considered a "silver bullet" by operators. However, the launch aircraft was required to fly straight towards the target during the missile's flight instead of performing evasive maneuvers, thus risking the crew.[6] Even when it hit, the small 250 pounds (110 kg) warhead was only useful against small targets like bunkers, when used against larger targets like the Thanh Hóa Bridge it did little other than char the structure.[7] The USAF began a series of projects to replace Bullpup, both larger versions of Bullpup, models C and D, as well as a series of Bullpup adaptations offering fire-and-forget guidance. Among the latter were the AGM-83 Bulldog, AGM-79 Blue Eye and AGM-80 Viper.

From 1966 to 1968, Hughes Missile Systems Division and Rockwell competed for the contract to build an entirely new fire-and-forget missile with far greater range performance than any of the Bullpup versions. Each were allocated $3 million for preliminary design and engineering work of the Maverick in 1966.[8] In 1968, Hughes emerged with the $95 million contract for further development and testing of the missile; at the same time, contract options called for 17,000 missiles to be procured.[8] Hughes conducted a smooth development of the AGM-65 Maverick, with the first unguided test launch from a F-4 on 18 September 1969,[9] with the first guided test on 18 December successfully performing a direct hit on a M41 tank target at the Air Force Missile Development Center at Holloman Air Force Base, New Mexico.[8]

In July 1971, the USAF and Hughes signed a $69.9 million contract for 2,000 missiles,[8] the first of which was delivered in 1972.[6] Although early operational results were favorable, military planners predicted that the Maverick would fare less successfully in the hazy conditions of Central Europe, where it would have been used against Warsaw Pact forces.[10] As such, development of the AGM-65B "Scene Magnified" version began in 1975 before it was delivered during the late 1970s. When production of the AGM-65A/B was ended in 1978, more than 35,000 missiles had been built.[2]

More versions of the Maverick appeared, among which was the laser-guided AGM-65C/E. Development of the AGM-65C started in 1978 by Rockwell, who built a number of development missiles for the USAF.[2][10] Due to high cost, the version was not procured by the USAF, and instead entered service with the United States Marine Corps (USMC) as the AGM-65E.[2][10]

Another major development was the AGM-65D, which employed an imaging infrared (IIR) seeker. By imaging on radiated heat, the IIR is all-weather operable as well as showing improved performance in acquiring and tracking the hot engines, such as in tanks and trucks, that were to be one of its major missions.[2] The seekerhead mechanically scanned the scene over a nitrogen-cooled 4-by-4 pixel array using a series of mirrored facets machined into the inner surface of the ring-shaped main gyroscope.[citation needed] The five-year development period of the AGM-65D started in 1977 and ended with the first delivery to the USAF in October 1983.[2] The version received initial operating capability in February 1986.[1]

The AGM-65F is a hybrid Maverick combining the AGM-65D's IIR seeker and warhead and propulsion components of the AGM-65E.[2] Deployed by the United States Navy (USN), the AGM-65F is optimized for maritime strike roles.[2] The first AGM-65F launch from the P-3C took place in 1989, and in 1994, the USN awarded Unisys a contract to integrate the version with the P-3C.[4][11] Meanwhile, Hughes produced the AGM-65G, which essentially has the same guidance system as the D, with some software modifications that track larger targets.[1]

In the mid-1990s to early 2000s, there were several ideas of enhancing the Maverick's potential. Among them was the stillborn plan to incorporate the Maverick millimeter wave active radar homing, which can determine the exact shape of a target.[12] Another study called "Longhorn Project"[12] was conducted by Hughes, and later Raytheon following the absorption of Hughes into Raytheon, looked a Maverick version equipped with turbojet engines instead of rocket motors. The "Maverick ER", as it was dubbed, would have a "significant increase in range" compared to the Maverick's current range of 25 kilometres (16 mi).[13] The proposal was abandoned, but if the Maverick ER had entered production, it would have replaced the AGM-119B Penguin carried on the MH-60R.[13] 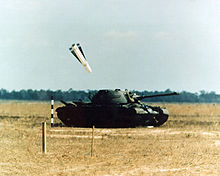 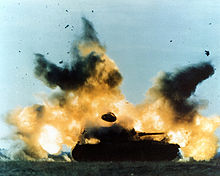 The most modern versions of the Maverick are the AGM-65H/K, which were in production as of 2007[update].[1] The AGM-65H was developed by coupling the AGM-65B with a charge-coupled device (CCD) seeker optimized for desert operations and which has three times the range of the original TV-sensor;[2][13] a parallel USN program aimed at rebuilding AGM-65Fs with newer CCD seekers resulted in the AGM-65J.[2] The AGM-65K, meanwhile, was developed by replacing the AGM-65G's IR guidance system with an electro-optical television guidance system.[1]

The Maverick has a modular design, allowing for different combinations of the guidance package and warhead to be attached to the rocket motor to produce a different weapon.[1] It has long-chord delta wings and a cylindrical body, reminiscent of the AIM-4 Falcon and the AIM-54 Phoenix.[3]

Different models of the AGM-65 have used electro-optical, laser, and imaging infrared guidance systems. The AGM-65 has two types of warhead: one has a contact fuze in the nose, the other has a heavyweight warhead fitted with a delayed-action fuze, which penetrates the target with its kinetic energy before detonating. The latter is most effective against large, hard targets. The propulsion system for both types is a solid-fuel rocket motor behind the warhead.[1]

The Maverick missile is unable to lock onto targets on its own; it has to be given input by the pilot or weapon systems officer (WSO) after which it follows the path to the target autonomously. In an A-10 Thunderbolt II, for example, the video feed from the seeker head is relayed to a screen in the cockpit, where the pilot can check the locked target of the missile before launch. A crosshair on the heads-up display is shifted by the pilot to set the approximate target, where the missile will then automatically recognize and lock on to the target. Once the missile is launched, it requires no further assistance from the launch vehicle and tracks its target automatically. This fire-and-forget property is not shared by the E version that uses semi-active laser homing.[2]

The Maverick was declared operational on 30 August 1972 with the F-4D/Es and A-7s initially cleared for the type;[8] the missile made its combat debut four months later with the USAF in the Vietnam War.[16] During the Yom Kippur War in October 1973, the Israelis used Mavericks to destroy and disable enemy vehicles.[10] Deployment of early versions of the Mavericks in these two wars were successful due to the favorable atmospheric conditions that suited the electro-optical TV seeker.[10] Ninety-nine missiles were fired during the two wars, eighty-four of which were successful.[17][N 1]

In June 1975, during a border confrontation, a formation of Iranian F4E Phantoms destroyed a group of Iraqi tanks by firing 12 Mavericks at them.[19] Five years later, during Operation Morvarid as part of the Iran–Iraq War, Iranian F-4s used Mavericks to sink three Osa II missile boats and four P-6 combat ships.[20] Due to weapons embargoes, Iran had to equip its AH-1J SeaCobra helicopters with AGM-65 Maverick missiles and used them with some success in various operations such as Operation Fatholmobin wherein Iranian AH-1Js fired 11 Mavericks.[21][22][23]

In August 1990, Iraq invaded Kuwait. In early 1991, the US-led Coalition executed Operation Desert Storm during which Mavericks played a crucial role in the ousting of Iraqi forces from Kuwait. Employed by F-15E Strike Eagles, F/A-18 Hornets, AV-8B Harriers, F-16 Fighting Falcons and A-10 Thunderbolt IIs, but used mainly by the last two, more than 5,000 Mavericks were used to attack armored targets.[1][24] The most-used variant by the USAF was the IIR-guided AGM-65D.[24] The reported hit rate by USAF Mavericks was 80–90%, while for the USMC it was 60%.[2] The Maverick was used again in Iraq during the 2003 Iraq War, during which 918 were fired.[11]

The first time the Maverick were fired from a Lockheed P-3 Orion at a hostile vessel was when the USN and coalition units came to the aid of Libyan rebels to engage the Libyan Coast Guard vessel Vittoria in the port of Misrata, Libya, during the late evening of 28 March 2011. Vittoria was engaged and fired upon by a USN P-3C Maritime Patrol aircraft with AGM-65 Maverick missiles.[25]

LAU-117 Maverick launchers have been used on US Army, USN, USAF, and USMC aircraft:

The Maverick has been exported to at least 35[29] countries:

According to the article on Kh-23 Grom the guidance system of the Serbian Grom-B is based on the Maverick system.