The RQ-2 Pioneer is an unmanned aerial vehicle (UAV) that had been utilized by the United States Navy, Marine Corps, and Army, deployed at sea and on land from 1986 until 2007. Initially placed aboard Iowa-class battleships to provide gunnery spotting, its mission evolved into reconnaissance and surveillance, primarily for amphibious forces.

It was developed jointly by AAI Corporation and Israel Aircraft Industries. The program grew out of successful testing and field operation of the Tadiran Mastiff UAV by the American and Israeli militaries.[1]

Essentially, the Pioneer is an upgraded Tadiran Mastiff which was re-engined to accommodate a greater payload by request of the US Navy. To accomplish this, the original "Limbach" two-cylinder two-stroke engine was replaced with a Fichtel & Sachs two-cylinder two-stroke. The Limbach motor utilized a 28 inch propeller from Propeller Engineering and Duplicating, Inc. of San Clemente, California. The newer, more powerful Fichtel & Sachs motor was outfitted with a 29 inch propeller (which spins in the opposite direction) from the Sensenich Propeller Manufacturing Company of Lancaster, Pennsylvania.

Launched by rocket assist (shipboard), by catapult, or from a runway, the Pioneer recovers into a net (shipboard) or with arresting gear after flying up to 5 hours with a 75-pound (34 kg) payload. It flies day or night missions with a gimbaled EO/IR sensor, relaying analog video in real time via a C-band line-of-sight (LOS) data link. Since 1991, Pioneer has flown reconnaissance missions during the Persian Gulf, Somalia (UNOSOM II), Bosnia, Kosovo and Iraq conflicts. In 2005, the Navy operated two Pioneer systems (one for training) and the marines operated two, each with five or more aircraft. It is also operated by Israel and the Republic of Singapore Air Force. In 2007 Pioneer was retired by the US Navy and was replaced by the Shadow UAV.

Internationally, Pioneer drones are perhaps most remembered for their role in the 1991 Gulf War, when a Pioneer launched by the Iowa-class battleship USS Wisconsin (BB-64) observed Iraqi troops on Failaka Island surrendering shortly after USS Missouri's attack on their trenchlines. When navy officials offered to transfer a Pioneer to the Smithsonian Institution, curators at the National Air and Space Museum specifically asked for the UAV that Iraqi troops surrendered to during the Gulf War.[2] 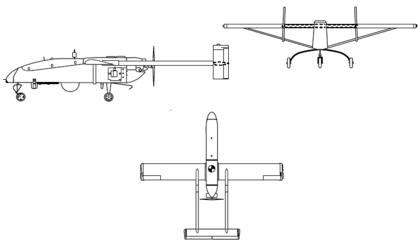