Arackaparambil Kurien Antony better known as A. K. Antony (born 28 December 1940) is an Indian politician and attorney who currently serves as Member of Parliament, Rajya Sabha[1] (Fifth Term), representing the state of Kerala. He also currently serves as the Chairman of the Disciplinary Action Committee of the All India Congress Committee,[2] Congress Working Committee.[3] and member of the Central Election Committee.

He has served two terms as Defence Minister of India,[4] and was appointed three times as Chief Minister of the state of Kerala.

A. K. Antony was born at Cherthala, near Alleppey in Travancore[citation needed] and was the son of Arackaparambil Kurien Pillai and Aleykutty Kurian.[5] His father died in 1959 and Antony self-financed part of his education through odd jobs.[6]

Antony entered politics as a student leader in Cherthala Taluk (Alleppey District) as an activist of the Kerala Students Union under the guidance of M. A. John.[8] He has been an active leader of many strikes like Oru Ana Samaram (Single Penny Strike). He became the youngest president[9] of Kerala Students Union in 1966[9] and also served in the Kerala Pradesh Congress Committee (KPCC) before becoming an All India Congress Committee (AICC) General Secretary in 1984. When he became KPCC president in 1972 he was the youngest person to hold that post. He was elected again as KPCC president in 1987, and was defeated by Vayalar Ravi in the KPCC presidential elections in 1991.[citation needed]

Antony founded the Congress (A) political party when he split from the Indian National Congress (Urs), a splinter group of the Indian National Congress (and opposed Indira Gandhi in inner party politics during the time when she was prosecuted by the Morarji Desai government, splitting off from the parent party with Devraj Urs.) The party was primarily active in Kerala and joined the LDF ministry headed by E. K. Nayanar during 1980–1982. After the fall of the Nayanar ministry, this party merged with the Congress in 1982, but Antony was not given any office until the death of Indira Gandhi. The members of the party have continued as a faction in the local congress afterwards.[citation needed]

On accusations in the Rajan case, K. Karunakaran resigned and Antony was made the 8th Chief Minister of Kerala,[10] becoming the youngest Chief Minister of the state[9][11] at the age of 37 serving from years 27 April 1977 to 27 October 1978.

Again, when Karunakaran resigned in connection with the ISRO case Antony was made the 16th Chief Minister of Kerala, serving from 22 March 1995 to 9 May 1996. He was the Leader of Opposition in the Kerala Legislative Assembly between 1996–2001. Antony was elected and served a third term from 17 May 2001 to 29 August 2004. He failed to retain power on the first two occasions as Chief minister. In 2004, immediately after the Congress in Kerala suffered a total rout in the Lok Sabha elections amid factional politics and in-fighting within the Congress Party, Antony resigned as Chief Minister.[9][11] He was succeeded by Oommen Chandy.

It was at Antony's behest that the decision to construct the new Legislature Complex was taken in 1977. During his tenure, he introduced the Unemployment Allowance, Festival Allowance for the State Employees, Prohibition of arrack and the steps initiated to revive the economy of Kerala.[12]

Antony carried out Asian Development Bank aided "Modernization of Government Plan". He also liberalised education by allowing several private engineering and medical colleges to open in Kerala and championed the state as an investment destination. He also ordered the closure of the Kerala Coca-Cola plant in 2004 citing drought and the non-availability of drinking water.[citation needed]

Antony was a Member of Parliament in the Rajya Sabha between 1993 and 1995 and was the Minister for Civil Supplies, Consumer Affairs and Public Distribution for a year in 1994 during the tenure of Prime Minister P. V. Narasimha Rao. He resigned on moral grounds as food minister in 1994 when his ministry was involved in a sugar import scandal, despite there being no allegations against him.[9][13]

In 2005, Antony entered the Rajya Sabha and was inducted into the Union Council of Ministers as Defence Minister following Natwar Singh's expulsion from the Congress and Pranab Mukherjee's transfer to the Ministry of External Affairs. After the Congress again won the elections in 2009 and formed the government once again under Prime Minister Manmohan Singh, Antony retained the portfolio of Defence for the second term becoming the longest-serving Defence Minister of India in a continuous stint for 8 years.[14][15] His "Buy and Make Indian" campaign saw the cancellation of billion of dollars in purchases of foreign arms, while at the same time stunting domestic production by restricting investments. The result has been a "critical shortage of ammunition and gaping holes in its air defense systems".[16]

He held the post of Chairman of the Indian Statistical Institute in Kolkata (2012 to 2014), President of the Institute for Defence Studies and Analyses and Chancellor of Defence Institute of Advanced Technology (2006 to 2014).[citation needed]

In the Manmohan Singh Cabinet, Antony was the senior member of the Cabinet Committees on Accommodation, Economic Affairs, Parliamentary Affairs, Political Affairs, and Security.[17]

He is considered as political guru of Rahul Gandhi.[18]

Antony's political skills and long experience in government have also led him to heading a large number of committees of Ministers in the government, a device that has been employed to obtain consensus within the members of the governing coalition on contentious issues.[19][20]

In order to professionalise the Civil Services, Antony led in decision on creation of a Central Civil Services Authority (CCSA) to oversee the higher bureaucracy.[21][22]

Antony is known for his incorruptible record and simple personal life[23][24] and his intolerance towards corruption in public life.[9][11][25][26][27][28][29][30] He has assiduously cultivated a public image that turns his perceived weaknesses into strengths.[31] He was ranked among top 10 Most Powerful Indians for the year 2012 by the Indian Express.[32]

10th Prime Minister of India Atal Bihari Vajpayee admired Antony[33] for his simplicity, gentleness and his zeal for reforms and change as a way to ensure acceleration of Kerala's all-round development.[33]

After Pranab Mukherjee was nominated for the 2012 President of India election, Antony was placed as the second-in-command after Prime Minister Manmohan Singh in the Cabinet of India.[4][34]

WikiLeaks reported that Antony was the only one of the two leaders who criticised Sanjay Gandhi during the 1976 AICC session in Guwahati during Emergency when the latter's political standing was on the rise.[35]

Antony is married to Elizabeth who is a Kerala High Court lawyer[36] and is founder of the Navoothan Charitable Foundation.[37] They have two sons.[38][39]

A. K. Antony with Chairman of the Joint Chiefs of Staff Michael Mullen and Timothy J. Roemer.

A. K. Antony with US Secretary of State Hillary Clinton.

A. K. Antony with U.S. Secretary of Defense Leon Panetta.

A. K. Antony with U.S. Secretary of Defense Robert Gates at The Pentagon. 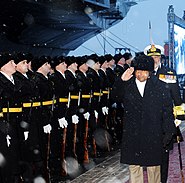