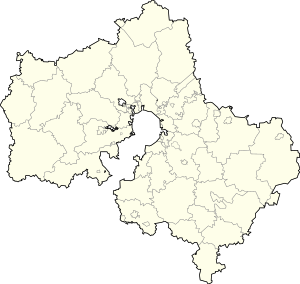 A-135 ABM system in Moscow Oblast. The black missiles are operational 53T6s, the unfilled missiles are formerly operational 51T6s and the dish is the Don-2N radar in Sofrino, which also has a 53T6 complex co located with it[1]

The A-135 (NATO: ABM-3) anti-ballistic missile system is a Russian military complex deployed around Moscow to counter enemy missiles targeting the city or its surrounding areas. It became operational during 1995, being a successor to the previous A-35, and compliant with the 1972 Anti-Ballistic Missile Treaty from which the US unilaterally withdrew in 2002.

The A-135 system attained "alert" (operational) status on February 17, 1995. It is currently operational although its 51T6 (NATO reporting name: SH-11) component is deactivated (as of February 2007). A newer missile is expected to replace it. There is an operational test version of the system at the test site in Sary Shagan, Kazakhstan.

The system is operated by the 9th Division of Anti-Missile Defence, part of the Air Defence and Missile Defence Command of the Russian Aerospace Defence Forces.[2][3]

A-135 consists of the Don-2N battle management radar and two types of ABM missiles. It gets its data from the wider Russian early warning system which is sent to the command centre which then forwards tracking data to the Don-2N radar.[1]

A memo from the archives of Vitalii Leonidovich Kataev, written circa 1985, had envisaged that the system "will be completed in 1987 to provide protection from a strike of 1-2 modern and prospective ICBMs and up to 35 Pershing 2-type intermediate-range missiles."[9]