The 98th Heavy Anti-Aircraft Regiment, Royal Artillery was an air defence unit of Britain's Territorial Army (TA) formed in Gloucestershire during the period of international tension leading up to the outbreak of World War II. It defended the eastern area of Gloucestershire and outer banks of the City of Bristol during the early part of the war and later served in North West Europe. The regiment continued in the postwar TA until it was amalgamated in 1950.

The Territorial Army was rapidly expanded following the Munich Crisis, particularly the Anti-Aircraft (AA) branch of the Royal Artillery (RA). The 98th Anti-Aircraft Regiment, Royal Artillery was among the new units raised in the Spring of 1939. It was formed in the Gloucestershire town of Cheltenham under the command of the 46th Anti-Aircraft Brigade, based in Bristol.[1] By April the regiment was commanded by Lieutenant Colonel F. Longueville DSO MC (assigned 1 April) and had the following structure following formation;[2][3]

In June 1939, as the international situation worsened, a partial mobilisation of Anti-Aircraft Command's TA units was begun in a process known as 'couverture', whereby each unit did a month's tour of duty in rotation to man selected AA gun and searchlight positions. On 24 August, ahead of the declaration of war, AA Command was fully mobilised at its war stations. The new regiment mobilised as part of 46th (Gloucestershire) Anti-Aircraft Brigade in the 5th Anti-Aircraft Division, defending South Wales, South West England (Wessex), and South England.[2]

Luckily, the months of the Phoney War that followed mobilisation allowed AA Command to address its equipment and manpower shortages. When the War Office released the first intakes of Militiamen to the Command in early 1940, most were found to be in low physical categories and without training. Fitness and training was greatly improved by the time Britain's AA defences were seriously tested during the Battle of Britain and Blitz.[4] 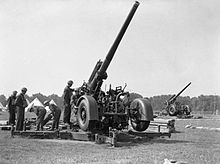 The Battle of Britain

In the summer of 1940, all RA units manning the older 3-inch or newer 3.7-inch and 4.5-inch guns were designated as Heavy AA (HAA) regiments to distinguish them from the new Light AA (LAA) regiments appearing in the order of battle. As a result of this, the regiment was retitled as the 98th Heavy Anti-Aircraft Regiment, RA (TA). During this period the regiment had been assigned to the 46th AA Bde, but in September 1940 was reassigned, moving to the 44th Anti-Aircraft Brigade of the 4th Anti-Aircraft Division. After being reassigned, the regiment moved to Manchester and was tasked with AA defence in the heart of the city. This move had been the result because of the movement of the 65th (6th/7th Battalion, The Manchester Regiment) Heavy Anti-Aircraft Regiment, RA to the Orkney and Shetland Defences in the protection of the Royal Navy's base at Scapa Flow. The regiment would continue to be based in Manchester until 1944.[4][5][6]

In March 1944 SHAPE was preparing for a major offensive into France as discussed at the Yalta Conference. This offensive was to be designated as 'Operation Overlord' otherwise known as the Invasion of Normandy. Following the announcement to the British forces, the regiment moved south in preparation for the landing and support of the Second Army as one of the HAA regiments assigned to HQ, 2nd Army. After arriving to the south coast, the regiment was assigned to the 75th Anti-Aircraft Brigade which was tasked to supporting the VIII Corps, and subsequently commanded by CCRA, VIII Corps. In June 1944 the regiment landed with the army and continued to support them as they headed west. By the end of the war, the regiment was reassigned to the 76th Anti-Aircraft Brigade. Finally, in 1946 following the end of the war, the regiment was placed into 'suspended animation'.[1][5][6]

Finally on 30 August 1950 following wide-scale disbandments the regiment was slated for this fate and amalgamated with the 312th (Wessex) Medium Regiment, RA to form the 312th (Gloucestershire) Heavy Anti-Aircraft Regiment, RA (TA) with RHQ and Q batteries continuing from the former. AA Command was disbanded on 10 March 1955 and there were wholescale amalgamations among its units, as a result the regiment was amalgamated with two other Gloucestershire regiments to form the 311th (City of Bristol) HAA Regt, RA (TA). The regiment's successor was the specialist 266 (Gloucestershire Volunteer Artillery) Observation Post Bty, RA (TA) which in 1988 was still based in Bristol. Following the 2015 Army 2020 Refine, the battery is now under control of the 104th Regiment, Royal Artillery and paired with the 29th (Commando) Regiment, Royal Artillery continuing their specialist artillery role.[1][7][9][10][11][12]