The 900th Expeditionary Air Refueling Squadron (900 EARS) is a provisional United States Air Force unit. It was last known to be assigned to the 398th Air Expeditionary Group, stationed at Incirlik Air Base, Turkey. The 900 EARS may be activated or inactivated at any time.

Established under Strategic Air Command on 9 Apr 1962 as the 900th Air Refueling Squadron at Sheppard AFB, Texas, equipped with KC-135 Stratotankers. The squadron provided air refueling primarily to the B-52 Stratofortress-equipped 4245th Strategic Wing and other USAF units as directed. Reassigned to the 494th Bombardment Wing at Sheppard on 1 Feb 1963 when the 494th replaced the 4245th SW.

Reassigned by SAC to the 509th Bombardment Wing at Pease AFB, New Hampshire on 2 April 1966 upon inactivation of the 494th BMW. Inactivated on 25 June 1966, most personnel and equipment being assigned to the 509th ARS. 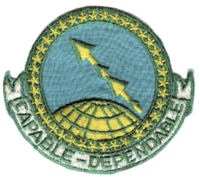