The 8x68mm S rimless bottlenecked rifle cartridge (the S means it is intended for 8.2 mm (.323 in) groove diameter bullets) and its necked down sister cartridge the 6.5x68mm (no S, or anything else, required) were developed in the 1930s by Mr. Schüler of the August Schüler Waffenfabrik, Suhl, Germany as magnum hunting cartridges that would just fit and function in standard sized Mauser 98 bolt action rifles. This is one of the early examples where a de novo rifle cartridge (the 8x68mm S and 6.5x68mm have no other cartridge as parent case) was developed by a gunsmith to fit a specific popular and widespread type of rifle.

The German ammunition manufacturer RWS[2] (Rheinisch-Westfälischen Sprengstoff factories) introduced both cartridges commercially in the spring of 1939. With the official certification of the .375 Hölderlin this German 68 mm "family" of magnum rifle cartridges that all share the same basic cartridge case got expanded 68 years later.

The cartridges in this German 68 mm cartridge "family" are, in the order of development:

The M 98 bolt actions and magazine boxes of standard military Mauser 98 rifles have to be adapted by a competent gunsmith to function properly with these magnum cartridges since their cases are longer and have a larger diameter than the 8x57mm service cartridges. In properly adapted standard military Gewehr 98 or Karabiner 98k service rifles the large 8x68mm S cartridges are however praised for very smooth and reliable feeding.

The widespread availability of standard size Mauser 98 rifles and the fact that the .375 H&H Magnum cartridge and its necked down version the .300 H&H Magnum with approximately 72.4 mm case length were too long to fit in standard sized Mauser 98 bolt action rifles makes the shorter 8x68mm S, 6.5x68mm and .375 Hölderlin interesting chambering options.

World War II spoiled the commercial introduction and spread of the 8x68mm S amongst German hunters. The cartridge became due to its high performance and flat trajectory popular after World War II when German hunters were allowed again to own and hunt with full bore rifles. The 8x68mm S performance also made that hunters who had problems with handling magnum cartridge recoil stepped down to less powerful but for German conditions adequate medium cartridges like the 8x57mm IS, 7x64mm (Brenneke) or .30-06 Springfield (also known as the 7.62x63mm in metric countries). Recoil sensitive shooters can fit an efficient muzzle brake to significantly reduce the amount of recoil. With the help of a muzzle brake the 8x68mm S recoil is reduced to tolerable levels.

Extremely thick brass results in 'only' 5.58 ml (86 grains) H2O cartridge case capacity for the 8x68mm S. A rare feature of this German rimless bottlenecked centerfire cartridge design is that it has a slightly rebated rim (P1 - R1 = 0.3 mm). A sign of the era in which the 8x68mm S was developed are the gently sloped shoulders. The exterior shape of the case was designed to promote reliable case feeding and extraction in bolt action rifles, under extreme conditions. 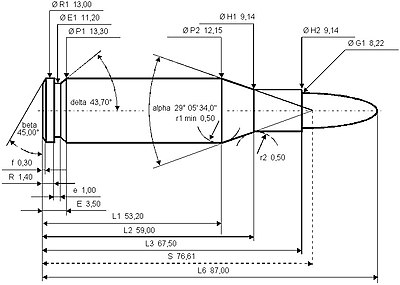 According to the official C.I.P. (Commission Internationale Permanente pour l'Epreuve des Armes à Feu Portatives) guidelines the 8x68mm S case can handle up to 440 MPa (63817 psi) piezo pressure. In C.I.P. regulated countries every rifle cartridge combo has to be proofed at 125% of this maximum C.I.P. pressure to certify for sale to consumers.

The American .325 WSM cartridge introduced in 2005 is probably the closest ballistic twin of the 8x68mm S. The .325 WSM is considerably shorter and fatter and has a more radical rebated rim (P1 -R 1 = 0.51 mm), much steeper shoulder angle (70 degrees / 35 degrees for Americans) and a shorter neck (7.82 mm). This makes the 8x68mm S case with its 9.11 mm long neck better suited for loading long heavier bullets and due to its sleeker exterior shape bound to cycle more reliably in bolt action rifles in extreme situations.

German big game hunters often use 8x68mm S rifles in Africa for hunting plains game, where American hunters would choose one of the .30 or .338 magnum cartridges. The 8x68mm S as a pure civil cartridge can be used in countries which ban civil use of former or current military ammunition.

Since there are not many factory loads available RWS[3] currently (2007) offers 5 factory loads) and due to its good field reputation and efficiency, the 8x68mm S is often used by reloaders. They have used this cartridge extensively to create powerful loads by handloading. Whilst staying within the 440 MPa C.I.P. limit a 8x68mm S rifle with a 650 mm (25.59 in) long barrel and appropriate modern gun propellants (Vihtavuori N560) can be handloaded to propel a 12.96 gram (200 gr) 8 mm bullet like the Sierra MatchKing to a muzzle velocity of 927 m/s (3042 ft/s).

The 8x68mm S has a good long range accuracy reputation i.e. it is not hard to develop or find loads that will shoot 1 MoA or better out of decent standard mass-produced rifles. Factory 8x68mm S rifles often have a 650 mm or 26 in barrel with a 280 mm (1 in 11 in) twist rate, which works well in daily life. This twist rate was chosen since the bullet jackets used in the 1930s were not strong enough to cope with the forces generated by the magnum muzzle velocities of the 8x68mm S. The 240 mm (1 in 9.45 in) twist rate normally found in the 8x57mm IS makes the 8x68mm S combined with modern bullets with jackets designed for magnum cartridges an excellent long range cartridge.

Reloaders use the 8x68mm S as a utility cartridge on all European game from fox, roe deer and chamois upwards to the big European game like red deer, moose and brown bear. These people realized that bullets with different characteristics can be utilized to produce varying effects on game. They also realized that from 8 mm caliber upwards the rise of sectional density and penetrating capability of practical spin stabilized rifle bullets (bullets up to 5 to 5.5 calibers in length) tends to flatten out.[4]

This means that loaded with light, short and soft nosed 8 mm bullets the 8x68mm S can be used on remarkably small game. Loaded with heavy, long and hard (solid copper alloy) bullets the 8x68mm S offers enough speed derived power to penetrate heavy and dangerous game. The 8x68mm S is suitable for hunting almost any game animal on the planet, though certain sub-Saharan Africa countries have a 9.3 mm (.366 in) minimum caliber rule for hunting Big Five game - i.e. leopard, lion, cape buffalo, rhinoceros and elephant (in Tanzania and South Africa 9.5mm/.375 in). In the Central African Republic, where there are no ammunition limits for hunting Big Five game, the 8x68mm S is used successfully for hunting elephant. In Namibia the 8x68mmS is legal for hunting Big Five if the loads have 4,000+ ft/lbs. So it often is used for cape buffalo, with bullets like the 14.26 gram (220 gr) Swift A-Frame, for example.

Maximum muzzle velocity comparison in % of the probably most proliferated European and American 8 mm rifle cartridges out of 650 mm (25.59 in) long barrels loaded with relatively light to heavy 8 mm bullets to their C.I.P. or SAAMI (Sporting Arms and Ammunition Manufacturers’ Institute) sanctioned maximum pressures.

The 8x68mm S as parent case

The 8x68mm S case has functioned as the parent case for the .375 Hölderlin (9.5x68mm), which is essentially a 9.53 mm (.375 caliber) necked-up version of the 8x68mm S. The wildcat status of the .375 Hölderlin ended in 2007 when it got C.I.P. certified and became an officially registered and sanctioned member of the German 68 mm "family" of magnum rifle cartridges. If the .375 Hölderlin will become available as factory ammunition, like the older cartridge "family" members (8x68mm S and 6.5x68mm), is still unknown.

According to the creator of the .375 Hölderlin, Mr. C. Otterbein, the idea behind the .375 Hölderlin was to develop a big game cartridge based on a German cartridge case for standard sized Mauser 98 bolt action rifles. The ballistic performance had to be close to or equal the performance of the .375 Holland & Holland Magnum. The 8x68mm S was chosen as parent case, since it offers enough case capacity and a competent gunsmith can relatively easy rechamber a standard Mauser 98 rifle to accept 8x68mm S based cartridges. To keep costs down and promote an acceptable recoil level blowing out the parent case was renounced.

Cartridges that are not officially registered with nor sanctioned by C.I.P. (Commission Internationale Permanente pour l'Epreuve des Armes à Feu Portatives) or its American equivalent, SAAMI (Sporting Arms and Ammunition Manufacturers’ Institute) are generally known as wildcats. By blowing out standard factory cases the wildcatter generally hopes to gain extra muzzle velocity by increasing the case capacity of the factory parent cartridge case by a few percent. Practically there can be some muzzle velocity gained by this method, but the measured results between parent cartridges and their 'improved' wildcat offspring is often marginal. Besides changing the shape and internal volume of the parent cartridge case, wildcatters also can change the original caliber. A reason to change the original caliber can be to comply with a minimal permitted caliber or bullet weight for the legal hunting of certain species of game.

Wildcats are not governed by C.I.P. or SAAMI rules so wildcatters can capitalize the achievable high operating pressures. It is often reported that modern 68 mm RWS brass can tolerate up to 500 MPa (72519 psi) piezo pressure. Because the 8x68mm S offers an exceptional sturdy, pressure resistant cartridge case that can relatively easily be reloaded with primers, powder and bullets and hence be reused several times it has become quite popular amongst wildcatters. With the 8x68mm S as the parent case wildcatters have created .25x68, .270x68, 7x68mm, .30x68, .338x68, .375x68 or .416x68 variants. Improved or blown out 68 mm cartridge designs are reported to come performance wise close to the 8 mm Remington Magnum which has about 14% more case capacity then the standard 8x68mm S.

Examples of 8x68mm S based wildcats are the relatively well known American 7 mm and .30 caliber Boo Boo and 7 mm and .30 HV wildcats. The Boo Boo wildcats were developed for long range target shooting where participants usually handload their ammunition. Several 1,000 yard shooting competitions have been won with Boo Boo wildcats. A wildcat from Europe that uses the 8x68mm S as its parent case is the .30 Kovacs.[5] It was designed in 1996 by Stefan Kovács, Austria-7041 Wulkaprodersdorf. The .30 Kovacs has much more powder-room (longer L2, wider P2, 40 degree Ackley-shoulder) then its parental case. It falls powder-room-wise between the .300 Winchester Magnum and .300 Weatherby Magnum but has energy and velocity falling between .300 Weatherby Magnum and the .300 Remington Ultra Magnum. This wildcat cartridge will be fitted only by Büchsenmachermeister Egon Kriebernegg.[6] Another European wildcat based on the 8x68mm S is the .300 Styria Magnum.[7] It was developed by Ing. Michael W. Mayerl from the Styria Arms company[8] in Austria in 2005 as a reliable beltless high power cartridge for Mauser 98 rifles. The parent case is shortened to 65 mm (2.559 in) case length and necked down to 7.82 mm (.308 in) calibre. The shoulder angle is the same as the 8x68mm S so fire forming is not necessary and no new headspace gages are needed. The development goal of this cartridge was to get a highly reliable .30-calibre magnum cartridge that fits in the standard Mauser 98 action without any modification of the feeding lips, follower, feeding ramp or magazine length. Only the bolt face must be opened to a diameter of 13.3 mm (0.524 in). The throat of the .300 Styria Magnum is similar to the proven .308 Winchester and short enough to seat the bullets to the lands without exceeding the maximum length of 84.8 mm (3.339 in) to fit the original Mauser 98 magazine. The thick walled 8x68mm S parent case manufactured by RWS can handle a usage piezo pressure up to 460 MPa (66717 psi).