German government driven efforts to improve the performance of the military M/88 ammunition and the service arms in which the M/88 was used resulted in the design by the Gewehr-Prüfungskommission and adaptation in 1905 of the dimensionally redesigned 7.92×57mm Mauser chambering. Besides the chambering, the bore (designated as "S-bore") was also dimensionally redesigned. The 1905 pattern 7.92×57mm Mauser S Patrone (S ball cartridge) was loaded with a lighter 9.9 grams (153 gr), pointed Spitzgeschoß (spitzer bullet) of 8.2 mm (0.323 in) diameter and more powerful double-base smokeless powder. With the improved ballistic coefficient of the new spitzer bullet, the 1905 pattern cartridge had an improved maximum effective range and a flatter trajectory, and was therefore less critical of range estimation compared to the M/88 cartridge.[5]

The rimless cartridge cases have been used as parent case for several other necked down and necked up cartridges and a rimmed variant.

Due to the cartridge's high performance and versatility it was adopted by the armed forces of various governments, including Spain, Poland, Czechoslovakia, Iran, Israel, Turkey, China, Egypt, former German African colonies, and the early Bundeswehr of West Germany.

During World War II it was one of the few cartridges used by both the Axis and Allied powers, a distinction it shared with the 9×19mm Parabellum pistol round. Apart from being the standard rifle cartridge of the German and Polish armed forces, it was also used by the armed forces of Great Britain in the Besa machine gun, which was mounted in some of their tanks and other armoured vehicles. Later, when Egypt decided to manufacture the Hakim rifle, a licensed copy of the Swedish Ag m/42, they redesigned the breech to accept the Mauser cartridge rather than use the original Ag m/42 cartridge. Its military use continues today (2012) in the former Yugoslavia in the Zastava M76 sniper rifle and the license-built copy of the MG 42, the M53 Šarac machine gun.[6]

Rifles formerly manufactured for the Wehrmacht and captured by the Allies were acquired by Israel and in 1948 played a critical role in the Israeli War for Independence. Israel, at the time, did not have a domestic arms industry and could not manufacture its own battle rifles, but it could produce replacement parts and refurbish existing weapons. Israel only used its Mauser rifles in their original configuration for a short period, however. When NATO countries created a standard rifle cartridge, the 7.62×51mm NATO, Israel replaced all of the 7.92×57mm Mauser barrels on its Mauser rifles with barrels chambered for the new cartridge.

The 7.92×57mm Mauser cartridge's performance makes it suitable for the hunting all medium-sized game such as the deer family, chamois, mouflon, bighorn sheep, wild boar and bear.

The 7.92×57mm Mauser cannot be used in countries which ban civil use of former or current military rifle cartridges, like France.

The rimmed variant of the 7.92×57mm Mauser, the 8×57mm IRS, was developed later for break-barrel rifles and combination guns.[8] The 8×57mm IRS is commercially offered as a chambering option in European break-action rifles.[1][8]

The naming of this cartridge is cultural and epoch dependent and hence not uniform around the world.

The 7.92×57mm Mauser cartridge is also known by the following designations:

The 7.92 naming convention is often used by English speaking sources for the military issued 7.92×57mm Mauser and 7.92×33mm Kurz cartridges. Remarkably, both the 7.92 and 7,9 used in these and alike designations do not exactly comply to the actual C.I.P. or SAAMI cartridge, chamber and bore dimensions. All other non-military issued rimless and rimmed rifle cartridges originating from Germany having approximately 8 mm bullet diameter are connected to 8 mm namings.[3]

The widespread use in German military Gewehr 98 and Karabiner 98k service rifles designed and manufactured by Mauser caused the "Mauser" tag, though the Mauser company had nothing to do with the development of this cartridge.[10]

The letter "J" often mentioned by English speaking sources is actually an "I" for Infanterie (German for "infantry"). A stamped "I" at the cartridge bottom in writing styles used in the past in Germany could be easily mistaken for a "J". Even in the 21st century the "I" is often substituted by a "J" in English speaking communities and German ammunition manufacturers often write "JS" instead of "IS" to avoid confusing customers. The letter "S" stands for Spitzgeschoß ("pointed bullet"), and the English designation "spitzer" for that style of bullet is derived from this German term.

The mainly European arms standards body Commission Internationale Permanente pour l'Epreuve des Armes à Feu Portatives (Permanent International Commission for portable firearms testing) (C.I.P.)—an organisation for standards in ammunition for civilian use—currently (2012) designates the 7.92×57mm Mauser as the 8 × 57 IS. This designation has the power of law for civil use in C.I.P. member states like the United Kingdom.[3]

Warning: the 8 × 57 IS and 8 × 57 I (other non-military issued rifle cartridge developed by civilians after the 8 × 57 IS) are not the same cartridge and are not interchangeable. To avoid catastrophic firearm failures that could endanger users or bystanders, it is important to distinguish clearly between these two differing chamberings and bullet diameters, and only fire them in appropriately chambered/barrelled rifles.

Since the SAAMI has no authority to issue nomenclature rulings, the nomenclature used for this cartridge can vary in the United States.

The German military used 7,9mm as designation or omitted any diameter reference and only printed the exact type of loading on ammunition boxes during World War II.

In Sweden the cartridge was designated "8mm patron m/39"[11]

The British military's Besa machine gun was chambered for the 7.92×57mm Mauser, and was used in armoured vehicles during World War II. The British referred to this ammunition as Cartridge SA, 7.92.[13]

The 7.92×57mm Mauser cartridge has a cartridge case capacity of 4.09 ml (63 grains) H2O. The exterior shape of the case was designed to promote reliable case feeding and extraction in bolt action rifles and machine guns alike, under extreme conditions. 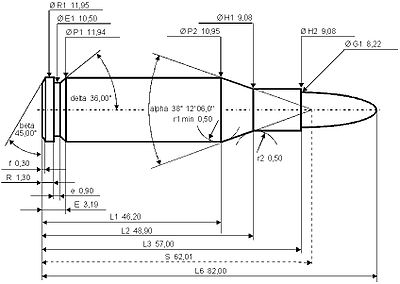 According to the official C.I.P. (Commission Internationale Permanente pour l'Epreuve des Armes à Feu Portatives) rulings the 7.92×57mm Mauser can handle up to 390.00 MPa (56,565 psi) Pmax piezo pressure. In C.I.P. regulated countries every rifle cartridge combo has to be proofed at 125% of this maximum C.I.P. pressure to certify for sale to consumers.[16] This means that 7.92×57mm Mauser chambered arms in C.I.P. regulated countries are currently (2013) proof tested at 487.50 MPa (70,706 psi) PE piezo pressure.[3]

The SAAMI (voluntary) Maximum Average Pressure (MAP) for this cartridge is 35,000 psi (241.3 MPa) piezo pressure or (37,000 CUP).[17][18] This is considerably lower than the C.I.P. pressure limit and is done for liability reasons, in case a 7.92×57mm Mauser cartridge is fired in an "I-bore" rifle that has a narrower throat and barrel diameter. Most European ammunition manufacturers generally only load to a lower pressure limit for I-bore cartridges; and the US based manufacturer Hornady followed their lead in their (now discontinued) EuroSpec brand 8×57 JS load.

The German standard s.S. (schweres Spitzgeschoß—"heavy pointed bullet") ball bullet was 35.3 mm (1.39 in) long, boat-tailed, and very well made.[19] It was lead filled, had a gilding-metal-plated jacket, and weighed 12.8 grams (197.53 gr). The s.S. ball boat tail projectile was designed for long range use and offered the best aerodynamic efficiency and external ballistic performance of any standard rifle bullet used during World War II, with a G1 ballistic coefficient between 0.593 and 0.557 (ballistic coefficients are somewhat debatable). When fired at the typical muzzle velocity of 760 m/s (2,493 ft/s) out of a 600 mm (23.6 in) barrel the s.S. bullet retained supersonic velocity up to and past 1,000 m (1,094 yd) (V1000 ≈ Mach 1.07) under International Standard Atmosphere conditions at sea level (air density ρ = 1.225 kg/m3). It had a maximum range of approximately 4,700 m (5,140 yd)[21] Even by contemporary (2012) standards 1000+ m (1,094+ yards) effective supersonic range is quite remarkable for a standard military rifle round. For recognition the circular groove between cap and brass was green, and it had a yellow colored bullet.

During World War II German snipers were issued with purpose manufactured sniping ammunition, known as the 'effect-firing' s.S. round.[22] The 'effect-firing' s.S. round featured an extra carefully measured propellant charge and seated a sS full metal jacketed boat tail projectile of match grade build quality, lacking usual features such as a seating ring or cannelure to further improve the already high G1 ballistic coefficient to approximately 0.595 (G1) or 0.300 (G7).[23] The 'effect-firing' s.S. projectile had a form factor (G7 i) of 0.869, which indicates good aerodynamic efficiency and external ballistic performance for the bullet diameter.[24][25]

German Spitzgeschoss mit Kern armor-piercing bullets were also very good, being very stable and accurate at long ranges.[19] The most common type of armor-piercing round had a hardened-steel core with plated-steel jacket and weighed 11.5 grams (177 gr). Other types appeared which used tungsten carbide and combinations for cores. Sintered iron and mild steel cores also came into use in ball ammunition.

British cartridges included "Ball", "Armour-Piercing", "Tracer", and "Incendiary". Blanks and a Drill round were also available for instruction purposes. The Drill round was an aluminium bullet fixed in a chromium-plated case which had three deep lengthwise recesses painted red to identify it. Ammunition was supplied in belted form with 225 rounds per belt.[13]

The Ball case was filled with a charge of around 45 grains (3 g) of nitro-cellulose.[13]

The British cartridge was used in only one weapon—the Besa machine gun. This was a Czech design adopted shortly before the war as a move towards rimless ammunition across the armed service. However the move was disrupted by the lead up to war. The BESA was only fitted to tanks and armoured cars of British design (the original Czech design was also produced for German use following the occupation of Czechoslovakia) and captured German ammunition was used when available.

The cartridges manufactured in Poland during the interwar period were mainly copies or modifications of the corresponding original German cartridge designs. The standard rifle cartridge was the S—a copy of the 1905 pattern German S Patrone loaded with the 9.9 g (152.8 gr) S bullet. For machine guns a cartridge variant loaded with the heavier 12.8 g (197.5 gr) SC bullet—a copy of the German 1934 pattern s.S. cartridge—was used. The armor-piercing variant loaded with the P bullet was a copy of the German SmK cartridge. The armor-piercing with tracer PS and incendiary Z cartridges were Polish modifications of the original German counterpart designs. The Polish designed a long-range machine gun cartridge loaded with the D bullet, which offered a maximum plunging fire range of 5,200 m (5,687 yd) to 5,500 m (6,015 yd).[12]

This was the parent case for many other later cartridges, such as: