The 7.65×21mm Parabellum (designated as the 7,65 Parabellum by the C.I.P.[2] and also known as .30 Luger and 7.65mm Luger) is a pistol cartridge that was introduced in 1898 by German arms manufacturer Deutsche Waffen und Munitionsfabriken (DWM) for their new Pistol Parabellum. The primary designers were firearms designers Georg Luger and Hugo Borchardt, who developed the round from the earlier 7.65×25mm Borchardt while working at DWM.

In 1897, the C-93 Borchardt pistol was submitted for testing to the Swiss Military Trials Committee. The Committee found the Borchardt too heavy and unwieldy to serve as a military sidearm. Georg Luger was tasked by DWM with improving upon the Borchardt pistol. He developed the 7.65x21mm Parabellum cartridge from the 7.65×25mm Borchardt. By shortening the cartridge case, Luger was able to design a narrower grip, and the toggle action required a shorter stroke than in the original Borchardt design. A transitional Borchardt-Luger model in the new caliber was submitted to the Swiss commission in 1898. After further improvements, the final result became the DWM Pistole-Parabellum ('Luger pistol'). The loading for the new cartridge was standardized and mass production began in 1900-1901 in DWM's factory in Karlsruhe, Germany.

Around 1903, a separate load was developed for Parabellum carbines, with approximately 20% more powder (increased from the standard 0.32-0.35 g to 0.4 g) and a blackened cartridge case. This carbine load was manufactured until sometime after World War I.

Since its introduction, 7.65x21mm Parabellum ammunition has been manufactured in several countries for both domestic use and for export, including Germany, Switzerland, Finland, France, Portugal, the United Kingdom and the United States.

With the adoption of the Luger pistol in 1900, the 7.65mm Luger became the standard pistol cartridge of the Swiss Army until the late 1940s. The later sidearm of the Swiss military, the SIG P210, was also manufactured in this caliber, but only for civilian use; Swiss military issues of the P210 were chambered in 9×19mm Parabellum.

The Luger pistol in 7.65mm was adopted by the Finnish in 1923 with the designation Parabellum Pistooli 23, abbreviated m/23. About 8000 pistols were delivered, but few survived the war. Many of these pistols were rebarreled to 9mm, and a limited quantity remained in storage until 1980 for arming non-combat personnel.

In addition to the Luger Parabellum and the SIG P210, several other handguns have been manufactured in this caliber, mainly for commercial sale in countries that restrict civilian use of contemporary military calibers such as 9mm Parabellum. Examples include the Astra A-80, Benelli B80, Beretta 92, Browning Hi-Power, Mamba, some models of the Ruger P series and the SIG Sauer P220.

A handful of submachine guns have been manufactured in this caliber, notably the SIG Bergmann 1920 (the licensed Swiss version of the Bergmann MP-18/1), the Flieger-Doppelpistole 1919, the M/Neuhausen MKMS, the Austrian MP34 and the Suomi M-26. 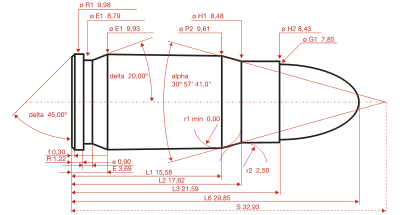 According to the official C.I.P. (Commission internationale permanente pour l'épreuve des armes à feu portatives) guidelines the 7.65×21mm Parabellum case can handle up to 235 MPa (34,100 psi) piezo pressure. In C.I.P. regulated countries every pistol cartridge combo has to be proofed at 130% of this maximum C.I.P. pressure to certify for sale to consumers.[2]