The 7.62×39mm round is a rifle cartridge of Soviet origin that was designed during World War II. It was first used in the RPD machine gun. Due to the worldwide proliferation of the SKS and AK-47 pattern rifles, the cartridge is utilized by both militaries and civilians alike. 7.62×39mm ammunition is purportedly tested to function well in temperatures ranging from −50 °C (−58 °F) to 50 °C (122 °F) cementing its usefulness in extremely cold polar or hot desert conditions.

The 7.62×39mm cartridge was influenced by a variety of foreign developments, including the German Mkb 42(H) and the US M1 carbine.[4]

Shortly after the war, the world's most recognized military pattern rifle was designed for this cartridge: the AK-47. The cartridge remained the Soviet standard until the 1970s, and is still one of the most common intermediate rifle cartridges used around the world. It was replaced in Russian service by the 5.45×39mm cartridge, which is used by the current issue AK-74 and variants.

On July 15, 1943, the People's Commissariat for Armaments (Техсовета Наркомата Вооружения) met to discuss the introduction of a Soviet intermediate cartridge after a German Mkb 42(H) had been captured and an M1 carbine exemplar had been made available to the Soviets by the US. The Soviet planners also decided at this meeting that their new cartridge be used in a whole range of infantry weapons, including a semi-automatic carbine, a selective fire (assault) rifle, and a light machine gun. The job of designing the Soviet intermediate cartridge was assigned to a committee led by chief designer NM Elizarov (Н.М. Елизаров), assisted by PV Ryazanov (П.В. Рязанов), BV Semin (Б.В. Семин) and IT Melnikov (И.Т. Мельников). Elizarov collaborated closely with some leading weapons designers, including Fedorov, Tokarev, Simonov, and Shpagin. About 314 cartridge designs were considered theoretically, before narrowing the selection down to 8 models that were physically constructed and tested.[4] Most of the development work on the new cartridge took place at OKB-44, which was soon thereafter renamed as NII-44, and which in 1949 was merged with NII-61, itself merged with TsNIITochmash in 1966.[5]

A first variant of the new cartridge was officially adopted for service after completing range trials in December 1943; it was given the GAU index 57-N-231. This cartridge actually had a case length of 41 mm, so it is sometimes referred to as the 7.62x41. The bullet it contained was 22.8 mm long and had a core made entirely of lead. This bullet has a somewhat stubbier appearance than later 7.62x39 bullets, with its maximal radius being attained after only 13.01 mm from its tip, and it was lacking a boat tail. After some further refinements, a pilot production series of this cartridge began in March 1944.[5]

After more detailed testing results became available, starting in 1944 the cartridge was tweaked in order to improve its accuracy and penetration. Initially, the boat tail had been omitted because the Soviet designers had assumed (incorrectly) that it would only make a difference at long ranges, when the bullet became subsonic, and the accuracy of the intermediate cartridge at these ranges was considered inconsequential. However, further testing showed that the boat tail improved accuracy even at shorter ranges, where the bullet was still supersonic. In order to maintain the overall mass of the bullet, after adding the boat tail, the ogival head section of the bullet was lengthened as well, making the bullet more streamlined overall. The maximum radius was now attained at some 15.95 mm from the tip and the overall length of the bullet increased to 26.8 mm. In order to preserve the total length of the cartridge, the case sleeve was shortened to 38.7 mm (and by rounding it is customarily referred to as 7.62x39.) Additionally, the new bullet had a core made of low-carbon steel wrapped in lead. The use of low-carbon (mild) steel was guided mostly by the desire to reuse some industrial equipment that was manufacturing the 7.62×25mm Tokarev cartridge rather than by bullet fragmentation considerations. This bullet was given the acronym "7.62 PS" (76.2 ПС), where "S" initially stood for "surrogate" (суррогатированная), but later the letter was taken to refer to the steel component of the core, which accounted for about 50% of the core volume. The 7.62x39 cartridge equipped with the PS bullet finally overcame all objections of the GAU in mid-1947, when it was ordered into series production, and given the index 57-N-231S.[5]

The design that was ultimately selected by the Soviets has more dimensional similarities to the GECO cartridge used in the Vollmer M35 than with the Polte round used by the later German Sturmgewehr. Some authors, including C. J. Chivers, have speculated that the Soviets may have had access to the works of GECO and Vollmer during 1940, when Hitler allowed a large number of Soviet engineers to tour various German armament factories.[6] Anthony Williams however argues that the Soviet M43 round was sufficiently different to dismiss the idea that it was a copy of any German round in existence at the time.[7]

The 57-N-231S cartridge used a "bimetallic" (steel and copper) case. In the early 1960s, a "lacquered" steel case was introduced, and the new cartridge was initially given the designation 57-N-231SL. In an effort to simplify terminology, sometime thereafter the 57-N-231 designation was recycled to denote all steel-core 7.62x39 Soviet ammunition, irrespective of case build.[5]

In the mid 1950s, Elizarov's team, now working at NII-61, developed a special subsonic bullet for the 7.62x39 cartridge. It was adopted for service in 1962, and given the army designation "7.62 US" (US stood for уменьшенной скоростью, meaning reduced speed) and the GRAU index 57-N-231U. The subsonic bullet was considerably longer (33.62 mm) and heavier (12.5 g) than the PS bullet, and also had a different, non-layered core structure. The core of its head section was entirely made of tool steel, followed by another section entirely made of lead. The subsonic bullet also has a larger maximum diameter of 7.94 mm compared to all other 7.62x29 bullets that peak at 7.92 mm diameter; the larger diameter of the lead-core section was intended to provide a tighter fit to the barrel by better engaging the rifling grooves. The 7.62 subsonic ammo was intended to be fired from AK47-type rifles equipped with the PBS-1 silencer, and developed a muzzle velocity of about 285–300 m/s. For recognition, this ammo typically has the bullet tips pained black with green band underneath.[5]

After 1989, the regular (PS) Russian bullets started to be manufactured with a steel core with a higher carbon concentration and subjected to heat treatment. This change improved their penetration by 1.5-2 times. It is not possible to externally distinguish these bullets from the earlier, softer PS ones except by year of fabrication. At about the same time, tool steel was adopted for a normal velocity 7.62x39 bullet. Called BP, this bulled was developed in the 1980s and 1990s. It was officially adopted for Russian service in 2002 under the service name "7.62 BP", and with the GRAU designation 7N23. The BP bullet is claimed to achieve over three times the penetration of the PS bullet; it can defeat the Russian bullet-proof vest with designation 6B5 at distances below 250 meters. The BP cartridge has the tip of its bullet painted black. The BP bullet itself is slightly longer (27.4 mm) compared to the PS bullet, but has the same mass of 7.9 grams.[5]

At the same 1943 meeting that decided the development new cartridge, the Soviet planners decided that a whole range of new small arms should use it, including a semi-automatic carbine, a fully automatic rifle, and a light machine gun. Design contests for these new weapons began in earnest in 1944.[4]

The original Soviet M43 bullets are 123 grain boat-tail bullets with a copper-plated steel jacket, a large steel core, and some lead between the core and the jacket. The cartridge itself consisted of a Berdan-primed, highly tapered (usually steel) case which seats the bullet and contains the powder charge. The taper makes it very easy to feed and extract the round, since there is little contact with the chamber walls until the round is fully seated. This taper is what causes the AK-47 to have distinctively curved magazines (helping to distinguish AK-47s from AK-74s, which feed from a much straighter magazine). While the bullet design has gone through a few redesigns, the cartridge itself remains largely unchanged.

According to Martin Fackler, although the new cartridge represented a great leap forward from previous designs, compared to later designs like 5.56 mm and 5.45 mm bullets, it has little wounding capacity. The complete solidity of the M43 projectile causes its only drawback—it is very stable, even while traversing tissue. It begins to yaw only after traversing nearly 26 cm (10 in) of tissue.[8] This greatly reduces the wounding effectiveness of the projectile against humans. These wounds were comparable to that of a small handgun round using non-expanding bullets. Unless the round struck something vital, the wound was usually non-fatal, small and quick to heal.

In the 1960s Yugoslavia experimented with new bullet designs to produce a round with a superior wounding profile, speed, and accuracy to the M43. The M67 projectile is shorter and flatter-based than the M43. This is mainly due to the deletion of the mild steel insert. This has the side effect of shifting the center of gravity rearward in comparison to the M43. This allows the projectile to destabilize nearly 17 cm (6.7 in) earlier in tissue.[8] This causes a pair of large stretch cavities at a depth likely to cause effective wound trauma. When the temporary stretch cavity intersects with the skin at the exit area, a larger exit wound will result, which takes longer to heal. Additionally, when the stretch cavity intersects a stiff organ like the liver, it will cause damage to that organ. However, the wounding potential of M67 is mostly limited to the small permanent wound channel the bullet itself makes, especially when the bullet yaws (tumbles).[8]

Chinese military-issue ammunition in this caliber is M43 style with a mild steel core and a thin jacket of copper or brass. Chinese ammunition (as well as all other M43 ammunition) is currently banned from importation in the U.S. because U.S. federal law classifies the round as an armor-piercing handgun round. This classification is based on materials and bullet design rather than on empirical ability to penetrate armor.[10] 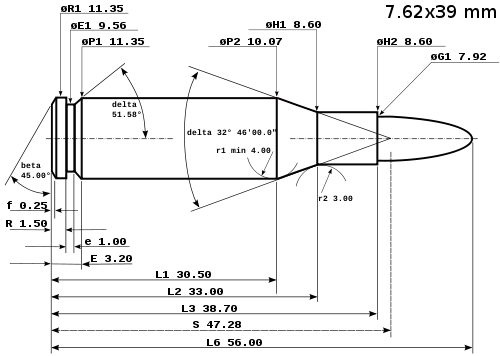 According to the official C.I.P. (Commission Internationale Permanente pour l'Epreuve des Armes à Feu Portatives) guidelines, the 7.62×39mm case can handle up to 355 MPa (51,488 psi) piezo pressure. In C.I.P. regulated countries every rifle cartridge combo has to be proofed at 125% of this maximum C.I.P. pressure to certify for sale to consumers.

The 7.62x39mm rounds in use with the Armed Forces of the Russian Federation are designed for AKM assault rifles and AK platform derived light machine guns. As per 2003 there were several variants of 7.62x39mm produced for various purposes. All use clad metal as case material.

Hunting and sport use

Since approximately 1990, the 7.62×39mm cartridge has seen some use in hunting arms in the U.S. for hunting game up to the size of whitetail deer, as it is approximately as powerful as the .30-30 Winchester round, and has a similar ballistic profile.[16] Large numbers of imported semiautomatic rifles, such as the SKS and AK-47 clones and variants, are available in this caliber.

In addition, several AR15 manufacturers, such as Colt, Olympic Arms, Del-Ton Inc and ModelOne Sales, are producing 16" carbines and 20" to 24" rifle length firearms that can often get very good accuracy to about 1" groups at 100 yards.

Ruger produces the Mini-30 as a 7.62×39mm version of their popular Mini-14 rifle. They also once had their M77 Mark II available in this caliber.

Remington Arms introduced its Compact Model 799 Mini Mauser bolt action rifle chambered in 7.62×39mm in 2006, describing the Mauser action as "sought after by today’s hunters and shooters."[17] The Mauser action is a copy of the Gewehr 98 model rifle's action.

The lower cost and high availability of military surplus ammunition makes this cartridge attractive for many civilian shooters.