The 7.5×55mm Swiss or GP 11 (or unofficially 7.5×55mm Schmidt Rubin) is a cartridge developed for the Swiss Army by Lt. Col. Eduard Rubin for rifles based on Rudolf Schmidt's action design. The ammunition used by the Schmidt-Rubin Model 1889 rifle was one of the first to use 7.5 mm copper jacketed rounds similar to those used today. The GP90 7.5×53.5mm round designed by Colonel Rubin was revolutionary in that the most popular military calibres used in Europe at the time were around 12.7 mm as opposed to 7.5 mm of the Schmidt-Rubin ammunition. Oddly enough the round was "paper patched" meaning the actual bullet was wrapped around by a piece of paper, much like cotton patches were placed around the bullet of a musket. Paper patching the round was supposed to aid in the gas seal of the bullet.

History of the cartridge variants

7.5 mm Swiss cartridges have been in Swiss Army service since 1889 in their Schmidt-Rubin Model 1889 rifles. Originally using a semi-smokeless powder the cartridge was known as the Gewehrpatrone 1890 (GP90). It was discovered that the primer of GP90 ammunition was far too corrosive so it was updated in 1903 to the GP90/03 cartridge.

While the scarcity of reloadable cartridge cases makes the 7.5 mm Swiss problematic for US shooters, large numbers of surplus rifles - especially the Model 1889 - have been imported. Reloadable cases can be easily produced by reforming .284 Winchester brass. Case rims will be slightly undersized, but this presents no problems so long as the rifle's extractor is in good condition. This allows the handloader to produce a GP90 load that is safe for the Schmidt-Rubin Model 1889 rifle.

GP90/23 the final cartridge variant for the Model 1889 rifle

Long after the discontinuation of the Schmidt-Rubin Model 1889 rifle in the Swiss Armed Forces the GP90/03 round was updated in 1923 and called the GP90/23, for use in shooting competitions. The GP90/23 discarded the paper patching around the bullet and the semi-smokeless powder was replaced by smokeless powder propellant.

In 1911 the metallurgy and bolt design in Swiss military rifles had advanced enough that a more powerful cartridge could be used in the Model 1911 rifles and Schmidt-Rubin 1896/11 rifles. The 7.5 mm Swiss round was updated to the completely non-corrosive Gewehrpatrone 1911 (GP 11). Besides being used in the Model 1911 rifles and Schmidt-Rubin 1896/11 rifles, GP 11 ammunition was also used in the MG 11 machine gun, K11 and K31 carbines as well as in the Stgw 57 battle rifle. The cartridge saw extensive service until the early 1990s with the standard rifles of Swiss servicemen, and still sees use by Swiss Army reservists, and sport shooters, of which there are many. Furthermore, it is still the standard ammunition for the MG 51 general purpose machine gun used on many Swiss armored vehicles such as the Pz 87 "Leopard 2" tank or the MOWAG Eagle Reconnaissance Vehicle. In this role, it is usually belt fed with GP 11 full metal jacket and GP 11 tracer rounds.

GP 11 is regarded as highly accurate and well-manufactured ammunition. Due to the increased availability of K31 rifles on the civilian market, a number of cartridge manufacturers, including Prvi Partizan and Hornady, now produce 7.5×55mm rounds in full metal jacket, soft-tip, and ballistic tip configurations.

Despite its nomenclature, the 7.5×55mm Swiss can with proper care use the same 7.62 mm (.308 in) bullets as conventional Western 7.62 mm (.308 in) cartridges that have slightly wider land and groove diameters. This allows for ease of handloading and custom competition or hunting loads, as nearly any .308 diameter bullet may be used. However, most Swiss match shooters use standard GP 11 ammunition, a testament to the accuracy of the GP 11 round.

Due to the greater pressure produced by the GP 11 round, it is not safe to fire GP 11 rounds in Model 1889 Schmidt-Rubin rifles. 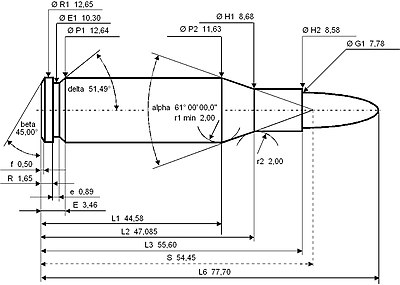 According to the official C.I.P. (Commission Internationale Permanente pour l'Epreuve des Armes à Feu Portatives) guidelines the 7.5×55mm Swiss case can handle up to 380 MPa (55,114 psi) piezo pressure. In C.I.P. regulated countries every rifle cartridge combo has to be proofed at 125% of this maximum C.I.P. pressure to certify for sale to consumers.