The 7×57mm cartridge, also known as the 7 mm Mauser, 7×57mm Mauser, 7 mm Spanish Mauser in the USA and .275 Rigby in the United Kingdom, was developed by Paul Mauser of the Mauser company in 1892 and adopted as a military cartridge by Spain in 1893.[1] It was subsequently adopted by several other countries as the standard military cartridge. It is recognised as a milestone in modern cartridge design, and although now obsolete as a military cartridge, it remains in widespread international use as a sporting round. The 7×57mm has been deservedly described as "a ballistician's delight". Many sporting rifles in this calibre were made by British riflemakers, among whom John Rigby was prominent; and, catering for the British preference for calibres to be designated in inches, Rigby called this chambering the .275 Rigby, after the measurement of a 7 mm rifle's bore across the lands.[1]

The Spanish military adopted a new Mauser rifle design in 1893. This took a smokeless powder centerfire cartridge with a bullet with a nominal diameter of 7 mm (0.285 in), and a case length of 57 mm - hence the names "7×57mm Mauser" and "7×57mm Spanish Mauser". It featured a long, 11.2 grams (173 gr) round-nose, full metal jacketed bullet with a muzzle velocity of about 700 m/s (2,300 ft/s) with 2,744 J (2,024 ft·lbf) muzzle energy from a 740 mm (29.1 in) barreled rifle.[1] For the late 19th century, these ballistics were impressive, and the loading provided a fairly flat trajectory combined with excellent penetration. At the same time, it exhibited relatively modest free recoil. That was a combination of attributes that made it popular with both soldiers and sportsmen alike.

The qualities of the 7×57mm as a military round were shown in the Spanish–American War of 1898. At the commencement of the American assault on the strategic Cuban city of Santiago, 750 Spanish troops defended positions on San Juan and Kettle Hills. The attacking force numbered approximately 6,600 American soldiers, most of them armed with then-new smokeless-powder Krag-Jorgensen rifle in .30-40 Krag caliber,[citation needed] and supported by artillery and Gatling gun fire. Though the assault was successful, the Americans soon realized that they had suffered more than 1,400 casualties, nearly 20 per cent of their forces. A U.S. board of investigation later concluded that the casualties were primarily due to the superior firepower of the Spanish Model 1893 Mauser rifles.[citation needed]

During the Second Boer War in South Africa, British authorities were obliged to re-evaluate rifle and ammunition design and tactics after facing Boer sharpshooters and snipers armed with Model 1895 Mauser rifles firing 7×57mm rounds with withering effectiveness, easily outranging the .303 British cartridge as regards accurate long-range fire.[2] The .303 cartridge at that time was still using cordite propellant, in contrast to the Mauser's higher-performance ballistite type smokeless powder.[3] The British modernized the previous .303 British cartridge variants to the Mark 7 variant that like the 7×57mm used smokeless propellant, and updated their rifle to the Lee Enfield No. 1 Mk III.

In 1913, following the lead of French and German Army commands in developing the spitzer or pointed-tip bullet shape, the Spanish ordnance authorities issued a redesigned 7×57mm cartridge with a spitzer bullet (7mm Cartucho para Mauser Tipo S).[5] It was loaded with a 9 grams (138.9 gr) spitzer bullet fired at a muzzle velocity of 850 m/s (2,789 ft/s) with 3,251 J (2,398 ft·lbf) muzzle energy from a 589 mm (23.2 in) long barrel. It had a maximum range of 3,700 m (4,046 yd).[4] The new spitzer bullet style was partially responsible for the cartridge's improved performance as it significantly reduced air drag within normal combat ranges.

The 7×57mm cartridge has 3.90 ml (60 grains H2O) cartridge case capacity. The exterior shape of the case was designed to promote reliable case feeding and extraction in bolt action rifles and machine guns alike, under extreme conditions. 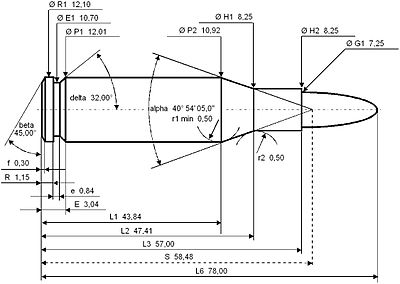 According to the official C.I.P. (Commission Internationale Permanente pour l'Epreuve des Armes à Feu Portatives) rulings the 7×57mm case can handle up to 390.00 MPa (56,565 psi) Pmax piezo pressure. In C.I.P. regulated countries every rifle cartridge combo has to be proofed at 125% of this maximum C.I.P. pressure to certify for sale to consumers.[6]

The SAAMI Maximum Average Pressure (MAP) for this cartridge is 51,000 psi (351.63 MPa) piezo pressure or 46,000 CUP.[7] [8] Although this lower specification is in deference to the purportedly weaker actions of the older Mauser 93 and 95 rifles which are still in circulation,[8] this concern is misplaced, as the original ammunition developed for, and issued with, the M93 Spanish Mauser produced an average pressure of 50,370 CUP in those rifles.[9] [10]

A rimmed cartridge was developed from the 7×57 shortly after its introduction for use in break-action rifles and combination guns. A rimmed cartridge greatly simplifies the issues of designing an extractor, particularly in a combination gun or "drilling" which must also be designed to extract rimmed shotgun shells. While various modern break-action and single-shot rifle and pistol designs have been developed that can reliably extract rimless cartridges, most of these date from the 1970s or later. While the external dimensions of the two versions are nearly identical other than the rim, there are differences in the internal design. In particular, the cartridge web, the area immediately above the rim on the rimmed version or the rebate on the rimless version, is thinner in the rimmed case, and some authorities recommend limiting the rimmed cartridge to 41,000 CUP because of this.[11] 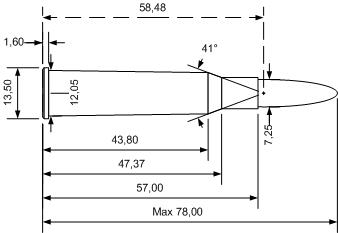 The ballistics of the 7×57mm became popular with deer and plains game hunters. The relatively flat trajectory and manageable recoil ensured its place as a sportsman's cartridge. The 7×57mm can offer very good penetrating ability due to a fast twist rate that enables it to fire long, heavy bullets with a high sectional density. This made it popular in Africa, where it was used on animals up to and including elephants, for which it was particularly favoured by noted ivory hunter W. D. M. Bell, who shot 1,011 elephants using a 7×57mm rifle, when most ivory hunters were using larger-caliber rifles. Bell selected the cartridge for moderate recoil, and used 11-gram military full metal jacket bullets for reliable penetration. Bell sectioned an elephant skull to determine the size and location of the brain, and used careful aim to ensure bullet placement in the brain.[1]

The 7×57 was also the favored cartridge of Eleanor O'Connor, wife of famous hunter and author Jack O'Connor. Eleanor accompanied her husband on multiple hunting expeditions all over the world, killing small and large game with the 7×57mm. Though not as popular today, the 7×57mm is still produced by most major ammunition manufacturers and many modern rifles are available chambered for the cartridge.

The 7x57mm round was also used by the Indian hunter and conservationist Jim Corbett to put down the infamous man-eating Leopard of Rudraprayag besides some of the other Man-Eaters of Kumaon. His writings mention using the .275 Mauser-Rigby rifle to despatch the leopard while employing it as a secondary weapon for other man-eaters, especially tigers (an Express 450/400 double-barrelled rifle being the primary).

In its original military loading, the 7x57mm cartridge produced an average pressure of 50,370 CUP when fired through the M93 Spanish Mauser rifle.[9][10] However, SAAMI has published a Maximum Average Pressure of only 46,000 CUP for this round.[13]