Back to page
View source

The 56th Artillery Command is a two-star command of the United States Army that was reactivated in October of 2021. The unit was originally formed in 1942 with a long period of active service being 1963 through 1991 utilizing the nuclear Pershing Missile System. The command was reactivated in November 2021 with MG Stephen J. Maranian commanding the unit from its headquarters in Mainz-Kastel, near the army's existing four-star headquarters in Wiesbaden.[3][4][5] 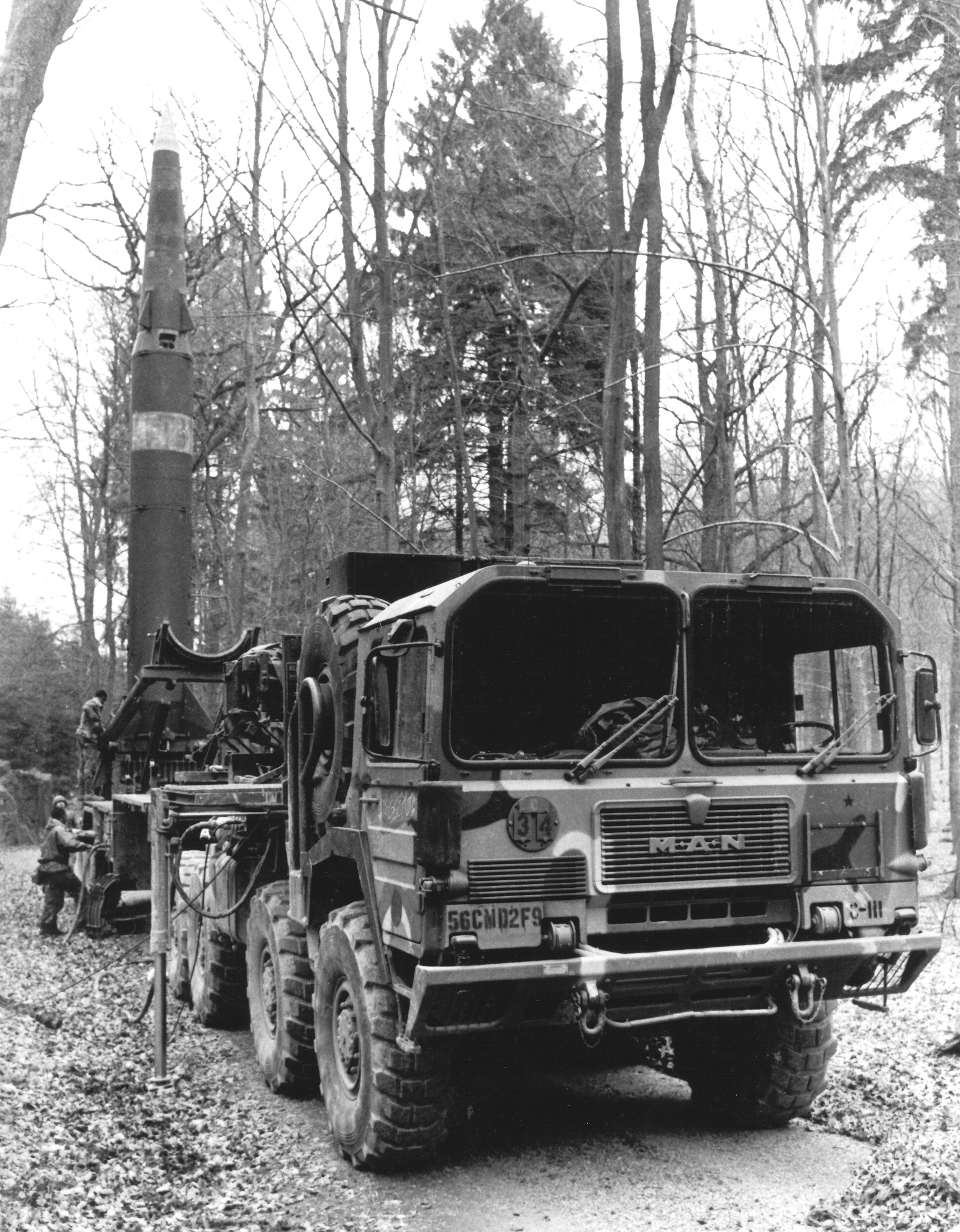 The 56th Coast Artillery Brigade was constituted in the Army of the United States on 14 September 1942, but not activated that day. Over six months later, it was activated at Camp Stewart, Georgia on 10 April 1943 and was redesignated the 56th Antiaircraft Artillery Brigade on 28 May 1943.[6] During World War II, Headquarters Battery (HHB) saw action in Belgium and received two Belgian fourrageres for action at Antwerp and was cited for the defense of Antwerp harbor.[7] Headquarters & Headquarters Battery is entitled to permanently display the Belgian Fourragere from the spearhead of its guidon.[2] In 1945, the unit was inactivated at Camp Shanks, New York.

In 1951, the 56th Antiaircraft Artillery Brigade was reactivated at Camp Edwards, Massachusetts and assigned to the United States First Army.[8][9] On 5 November 1951 The 56th AAA Brigade transferred from Camp Edwards to Fort Devens, Massachusetts and was assigned to the Eastern Army Antiaircraft Command.[10][11] They were then transferred to Fort Totten, New York on 24 January 1953.[12] The unit transferred back to Fort Devens on 15 July 1956.[13] They were redesignated as the 56th Air Defense Artillery Brigade on 20 March 1958.[14] The 56th Artillery Brigade was inactivated on 24 December 1964.[15]

In 1965 the 56th Artillery Group assumed the critical role of a Quick Reaction Alert (QRA) force and was required to maintain a portion of each unit at the highest level of combat readiness. These portions were to react within seconds of verified orders, and the entire command was to be fully operational within 2 hours of any alert activation. The increased requirements of the QRA mission necessitated some modifications to upgrade the Pershing missile system and at the same time caused the Army to increase the number of launchers at each battalion from four to 36.

In November 1983, with the Soviets fully invested in the SS-20, and on the verge of bankruptcy, the Americans began fielding the Pershing II. By 1985 all three firing battalions were completely operational with Pershing II and the Soviet Union faced a threat they were financially unwilling to counter.[16]

On 11 January 1985 three soldiers, SSG John Leach, SGT Todd A. Zephier, and PFC Darryl L. Shirley of Battery C, 3rd Battalion, 84th Field Artillery were killed in an explosion at Camp Redleg, Heilbronn. The explosion occurred while removing a missile stage from the storage container during an assembly operation. An investigation revealed that the Kevlar rocket bottle had accumulated a triboelectric charge in the cold dry weather; as the engine was removed from the container the electrical charge began to flow and created a hot spot that ignited the propellant.[17][18] A moratorium on missile movement was enacted through late 1986 when new grounding and handling procedures were put into place.

Under the reorganization, the 56th Field Artillery Command would always report directly to the highest commander in Europe at the time. Therefore, during peacetime, they reported to the Commander in Chief of United States Army Europe (CINCUSAREUR), whereas, during heightened tension or war, command passed to NATO, with Allied Air Forces Central Europe as their next higher headquarters.[20]

Additionally, command levels for the field artillery batteries were increased by one grade over similar units. Platoons were commanded by a captain, and batteries by a major. Battalions continued to follow a lieutenant colonel while the command itself was led by a brigadier general and later a major general.

These actions were meant to mitigate the increased responsibilities inherent with the mission they bore.

The Intermediate-Range Nuclear Forces Treaty[21] was ratified on 27 May 1988.[22] The firing batteries began to draw down their equipment as the missile launchers were destroyed. The Pershing first- and second-stage motors, reentry vehicles, warhead and radar section airframes were returned to Pueblo Depot Activity for elimination. On 30 June 1991, the 56th FA was inactivated,[23] and "discontinued" on 30 September 1991.[24]

In 1968 the group created the Pershing Professionals Badge to recognize individual proficiency on the Pershing missile system. It was awarded through 1979.

The Superior Unit Award was presented to the 56th Field Artillery Command and its subordinate units for service during the Pershing II fielding, 1 November 1983 through 31 December 1986.[25][26]

On 12 August 2021, U.S. Army Europe and Africa announced that the 56th Artillery Group would be reactivated in October of 2021 as the 56th Artillery Command. It is to be a two-star command led by MG Stephen J. Maranian and headquartered in Mainz-Kastel, near the Army's four-star headquarters in Wiesbaden.[3][27][5]

The shoulder sleeve insignia was authorized for wear by all subordinate units.

Description: On a disc 3 inches (76 mm) in diameter, with a 1⁄8 inch (3 mm) white border a scarlet disc centered on a blue background and surmounted at center by a vertical black missile silhouette outlined in white and issuing to base a white-edged scarlet flame and white smoke cloud, the missile flanked by two diagonal yellow lightning flashes issuing from either side of the nose cone. Attached immediately above the disc, an arc tab 2 3⁄8 inches (60 mm) in length and 11⁄16 inch (17 mm) in height consisting of a dark green background inscribed "Pershing" in scarlet letters 5⁄16 inch (8 mm) in height, with a 1⁄8 inch (3 mm) scarlet border.

Symbolism: Scarlet and gold (yellow) are the colors used for field artillery; blue denotes the assigned infantry support. The destructive power and target capability of the Pershing missile are suggested by the red disc at center and the upright missile signifies the readiness of the unit. The lightning flashes refer to the ability of the missile team to act and strike quickly in event of need.

Previous insignia: From 1963 to 1970, the authorized shoulder sleeve insignia was the emblem of the Seventh United States Army. From 1970 to 1971, the Pershing tab was worn with the Seventh Army insignia.

The distinctive unit insignia (DUI) was authorized for wear only for Headquarters and Headquarters Battery (HHB).

Description: A gold color metal and enamel device 1 3⁄16 inches (30 mm) in height overall consisting of a scarlet background with a trilobated cloud at the top bearing two black crossed cannons behind a white domed tower with black archway, (as depicted on the coat of arms of the city of Antwerp, Belgium) on a green base, surmounted overall by a vertical gold Pershing missile; all above a semi-circular gold scroll inscribed "Quick Reliable Accurate" in black letters.

Symbolism: Scarlet and yellow (gold) are the colors used for Field Artillery. The trilobated cloud symbolizes the Headquarters and Headquarters Battery, 56th Field Artillery Brigade's Northern France, Central Europe and Rhineland Campaigns during World War II. The crossed cannons with the Antwerp Tower allude to the Headquarters Battery's two Belgian Army Order of the Day Citations, the Belgian Fourragere for action at Antwerp and the Defense of Antwerp Harbor. Red and green are the colors of the Belgian Fourragere. The Pershing missile alludes to the unique mission of the unit as a participant in the Army's first nuclear strike force with missiles on constant alert (QRA).

Description: A gold colored metal and enamel device 1 3⁄16 inches (30 mm) in height overall, vesica on top and ovaloid in base consisting of a gold missile with billowing white exhaust behind and between two vertical gold cannon firing black bomb bursts on a red background. All arched by a gold nebuly and encircled in base by a gold scroll bearing the inscription "QUICK, RELIABLE, ACCURATE" in black letters.

Symbolism: Scarlet is the color used for Artillery. The cannon barrels symbolize the basic mission of the organization. The missile alludes to the "Pershing Missile" and to the unique mission of the unit as a participant in the Army's first Nuclear Strike Force with missiles on constant alert (QRA).


Cite error: <ref> tag with name "armyaircrews" defined in <references> is not used in prior text.