The 5.45×39mm cartridge is a rimless bottlenecked rifle cartridge. It was introduced into service in 1974 by the Soviet Union for use with the new AK-74 assault rifle. It gradually supplemented then largely replaced the 7.62×39mm round in service.

The Soviet original military issue 5N7 cartridge variant introduced in 1974 are loaded with full metal jacket bullets that have a somewhat complex construction. The 3.2 g (49.4 gr) boattail projectile has a gilding-metal-clad jacket. The unhardened steel core is covered by a thin lead coating which does not fill the entire point end, leaving a hollow cavity inside the nose. The bullet is cut to length during the manufacturing process to give the correct weight. The 5N7 uses a boattail design to reduce drag and there is a small lead plug crimped in place in the base of the bullet. The lead plug, in combination with the air space at the point of the bullet, has the effect of moving the bullet's center of gravity to the rear; the hollow air space also makes the bullet's point prone to deformation when the bullet strikes anything solid, inducing yaw. The brown-lacquered steel case is Berdan primed. Its 39.37 mm (1.55 in) length makes it slightly longer than the 7.62×39mm case which measures exactly 38.60 mm (1.52 in). The primer has a copper cup and is sealed with a heavy red lacquer. The propellant charge is a ball powder with similar burning characteristics to the WC 844 powder used in 5.56×45mm NATO ammunition. The 5N7 cartridge weight is 10.75 g (165.9 gr). 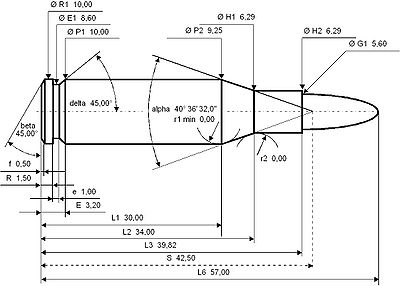 According to the official C.I.P. (Commission Internationale Permanente Pour L'Epreuve Des Armes A Feu Portatives) guidelines the 5.45×39mm case can handle up to 380 MPa (55,000 psi) piezo pressure. In C.I.P. regulated countries every rifle cartridge combo has to be proofed at 125% of this maximum C.I.P. pressure to certify for sale to consumers.

Early ballistics tests demonstrated a pronounced tumbling effect with high speed cameras.[5] Some Western authorities believed this bullet was designed to tumble in flesh to increase wounding potential. At the time, it was believed that yawing and cavitation of projectiles was primarily responsible for tissue damage. Martin Fackler conducted a study with an AK-74 assault rifle using live pigs and ballistic gelatin; "The result of our preset test indicate that the AK-74 bullet acts in the manner expected of a full-metal-cased military ammunition - it does not deform or fragment when striking soft tissues".[6] Most organs and tissue were too flexible to be severely damaged by the temporary cavity effect caused by yaw and cavitation of a projectile. With the 5.45 mm bullet, tumbling produced a temporary cavity twice, at depths of 100 and 350 mm. This is comparable to modern 7.62×39mm ammunition and to (non-fragmenting) 5.56 mm ammunition.

The 7N6 bullet has a 1.43 g (22.1 gr) steel rod penetrator. Since 1987 this penetrator is hardened to 60 HRC. The latter 7N6 cartridge can penetrate a 6 mm thick St3 steel plate at 300 m and 6Zh85T body armour at 80 m. 7N6 bullets have a red identification ring above the cartridge neck. The US Army's Ballistic Research Laboratory measured a ballistic coefficient (G7 BC) of 0.168 and form factor (G7 i) of 0.929 for the 7N6 projectile, which indicates good aerodynamic efficiency and external ballistic performance for the bullet diameter.[7][8]

The 7N10 "improved penetration" cartridge was introduced in 1992. The size of the steel penetrator was increased to 1.76 g (27.2 gr) and the lead plug in front of it was discarded. In 1994 the 7N10 design was improved by filling the air space with lead. Upon impacting a hard target, soft lead is pressed sideways by the steel penetrator, tearing the jacket. The 7N10 cartridge replaced the previous variants as standard Russian service round and can penetrate a 16 mm thick St3 steel plate at 300 m and 6Zh85T body armour at 200 m. 7N10 bullets have a violet/purple identification ring above the cartridge neck.

The 7N22 armour-piercing bullet, introduced in 1998, has a 1.75 g (27.0 gr) sharp-pointed steel penetrator and retains the soft lead plug in the nose for jacket discarding. 7N22 bullets can be identified by their red identification ring above the cartridge neck and a black tip.[9]

For training purposes the blank cartridges 7H3, 7H3M and 7Kh3 were developed. These round have a hollow white plastic imitation projectile. When these training rounds are used, the barrel of the gun is fitted at the muzzle with a Blank Fire Adapter to produce a gas pressure build-up for cycling the gun, as well as a breakup aid for their plastic projectiles.[10]

For instruction purposes the 7H4 training or dummy cartridge (which has longitudinal grooves) was developed.

For special purposes the 7U1 subsonic cartridge with a black and green painted meplat and CAP cartridge for underwater were developed.

The 5.45×39mm was developed by the Soviet Union for military use and it was not intended to create civilian weapons in this chambering. Only a few civilian 5.45×39mm weapons were developed and commercially offered. Non AK-74 platform rifles and commercial offerings include the East German Ssg 82 bolt action rifle and the Russian CRS-98 "Vepr-5, 45" semi-automatic carbine and Saiga semi-automatic rifle. In May 2008 the Smith & Wesson M&P15R was introduced. This was a standard AR-15 platform rifle chambered for the 5.45×39mm cartridge and was Smith and Wesson's first AR-variant rifle in a chambering other than 5.56×45mm NATO[11] and is no longer in current (2012) production.[12] The civilian version of the Israel Weapon Industries Tavor rifle for the US market includes an optional 5.45×39mm conversion kit.[13]

The US ammunition manufacturer Hornady produces commercial polymer-coated steel case 5.45×39mm ammunition loaded with 3.89 g (60.0 gr) polymer tipped V-MAX bullets with a stated ballistic coefficient (G1 BC) of 0.285.[14][15] WOLF Performance Ammunition offers several Berdan primed commercial 5.45×39mm loads.[16] The Russian ammunition manufacturer Barnaul Cartridge Plant also offers several Berdan primed commercial sporting and hunting 5.45×39mm cartridges. Barnaul states that their 5.45×39mm cartridges produce a maximal pressure of 294,2 MPa (41,054 psi) and have a bullet dispersion R100 of 25 mm (1.0 in) at a range of 100 m (109 yd), meaning every shot of a shot group will be within a circle of the mentioned diameter at 100 m (109 yd).[17]