No. 408 Squadron's mandate also includes supporting United Nations and NATO peacekeeping operations, land force training, and support to other government departments. For example, 408 Squadron's eight Griffons were assigned to support the Canadian contingent in the Balkans in 1999. Their job was to ferry small teams of paratroopers, infantrymen, and tankers to certain areas to check out water reservoirs, power grids, suspected weapons caches, minefields, and mass grave sites.

Given the rough terrain in Bosnia, the squadron proved invaluable for conducting aerial reconnaissance, observation, and transportation.

No. 408 Squadron's history dates back to June 24, 1941, when RAF Bomber Command's directive called for the formation of 408 Squadron as part of No. 5 Group RAF. It was to be the second Royal Canadian Air Force (RCAF) bomber squadron formed overseas. Goose Squadron, as it was to become known, was initially based at Lindholm in Yorkshire, England, and equipped with Handley Page Hampdens. During the war, the Goose Squadron converted aircraft several times. No. 408 would change from Hampden aircraft to the Halifax, and then to the Lancaster in August 1943 after moving to RAF Linton-on-Ouse and becoming part of No. 6 Group.

It flew 4,610 sorties and dropped 11,340 tons of bombs. A total of 170 aircraft were lost and 933 personnel were killed, listed as missing in action (MIA) or prisoners of war (POW). Squadron members won two hundred decorations, and 11 battle honours for its wartime operations.

On January 10, 1949, Goose Squadron was reformed at RCAF Station Rockcliffe, Ontario. Equipped with eight Lancaster Mark X photographic aircraft, it was tasked with the mapping of Canada, specifically the far North. In 1962, the squadron formed a flight of Canadair T-33 aircraft and given the additional task of photo reconnaissance missions in support of Army exercises.

On February 29, 1964, the Lancaster aircraft were retired and replaced with Dakotas. The Goose Squadron was moved to Rivers, Manitoba, and re-designated as a transport support and area reconnaissance squadron.

On May 1, 1964, RCAF Station Rivers Transport Support Flight with its C-119 Boxcars was transferred into 408 Squadron. In 1965, the Boxcars were replaced by CC-130 Hercules aircraft. As the decade drew to a close, 408 Squadron was once again redesignated. On October 1, 1968, it started its long history with 10 Tactical Air Group as a "Tactical Fighter Squadron".

During this post-war era, the squadron flew seven different aircraft: the Lancaster, Cansos, Norseman, Dakotas, Boxcars, T-33s, and Hercules aircraft. Late in 1970, the squadron was once more disbanded.

On January 1, 1971, 408 Squadron was once again re-activated at Namao in Edmonton, Alberta, as a tactical helicopter squadron (THS) and equipped with CH-135 Twin Huey and CH-136 Kiowa helicopters. 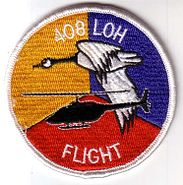 408 Tactical Helicopter Squadron UTTH Flight badge worn by CH-135 Twin Huey crews circa 1990. The badge is based on the shield of the province of Alberta