On May 4, 1954; when struggle becomes of a rage at Dien Bien Phu, the 3e BEP makes and clears way to Indochina.[1] On May 25, 1954, the battalion is at Haïphong.[1] On June 1, the count of the men forming the 3e BEP is transferred to the 2nd Foreign Parachute Battalion during the reconstitution of the later.[1] The 3e BEP merges with the injured of annihilated foreign battalions while in the meantime, owing to numerous volunteers, the 3e BEP is seen reconstituted at Sétif.[1] Back to Algeria, the three foreign paratrooper battalions (1er BEP, 2e BEP, 3e BEP) will be seen filling the ranks of the foreign regiment. On September 1, 1955, the 3e BEP becomes the 3rd Foreign Paratrooper Regiment (3e R.E.P).[1] Based at Batna, the regiment becomes operational but then is dissolved on December 1, 1955; the men constituting the regiment are merged with the 2nd Foreign Parachute Battalion, (2e B.E.P) to form a new corps, the 2nd Foreign Parachute Regiment.[1]

The insignia of the 3rd Foreign Paratropper Battalion was created in 1950 by Captain Darmuzai, battalion commander Chef de Bataillon, CBA of the 3e BEP.[1] 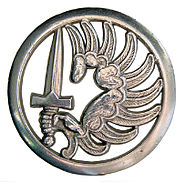 The insignia of the Foreign Legion Paratroopers of France represents a closed <<winged armed dextrochere>>, meaning a "right winged arm" armed with a sword pointing upwards. The Insignia makes reference to the Patron of Paratroopers. In fact, the Insignia represents <<the right Arm of Saint Michael>>, the Archangel which according to Liturgy is the <<Armed Arm of God>>. This Insignia is the symbol of righteous combat and fidelity to superior missions.