Military Wiki
Register
Don't have an account?
Sign In
Advertisement
in: Articles incorporating text from Wikipedia, 37 mm artillery, Anti-tank guns of the United States,
and 2 more

The 37 mm Gun M3 was the first dedicated anti-tank gun fielded by United States forces. Introduced in 1940, it became the standard anti-tank gun of the U.S. infantry with its size enabling it to be pulled by a jeep. However, the continuing improvement of German tanks quickly rendered the 37 mm ineffective, and by 1943 it was being gradually replaced in the European and Mediterranean theaters by the more powerful British-developed 57 mm Gun M1. In the Pacific, where the Japanese tank threat was less significant, the M3 remained in service until the end of the war.

Like many other light anti-tank guns, the M3 was widely used in the infantry support role and as an anti-personnel weapon, firing high-explosive and canister rounds.

The M5 and M6 tank mounted variants were used in several models of armored vehicles most notably in the Stuart Light Tank M3/M5, the Lee Medium Tank M3, and Greyhound Light Armored Car M8. In addition, the M3 in its original version was mated to a number of other self-propelled carriages.

In the mid-1930s, the United States Army had yet to field a dedicated anti-tank artillery piece; anti-tank companies of infantry regiments were armed with .50 in (12.7 mm) machine guns. Although there was some consideration had been given to replacing the machine guns with more a powerful anti-tank gun, the situation only began to change after the outbreak of the Spanish Civil War. Combat experience from Spain suggested that a light anti-tank gun, such as the German 37 mm PaK 35/36, was capable of neutralizing the growing threat posed by tanks.[1]

In January 1937, the Ordnance Committee recommended development of a such a weapon;[1] two PaK 36 guns were acquired for study.[2] As the projected main user of the weapon, the Infantry branch was chosen to oversee the work. They wanted a lightweight gun which could be moved around by the crew, so any ideas of using a larger caliber than that of the German gun were discarded.[1] It should also be noted that 37 mm was a popular caliber of anti-tank guns in 1930s; other anti-tank guns of the same caliber included Swedish Bofors gun, Czechoslovakian vz. 34 and vz. 37, Japanese Type 94 and Type 1.

Development and testing continued until late 1938. Several variants of gun and carriage were proposed until on 15 December a combination of the T10 gun and T5 carriage was officially adopted as the 37 mm Gun M3 and Carriage M4.[1] Although the weapon followed the concept of the PaK 36 and often referred to as a copy of it,[3] the M3 differed significantly from the German design and used different ammunition.

The gun was manufactured by Watervliet Arsenal and the carriage by Rock Island Arsenal. The first pieces were delivered early in 1940,[1] the production continued until 1943.

Some minor changes in the gun construction were introduced during production. The carriage received a modified shoulder guard and traverse controls (carriage M4A1, standardized on 29 January 1942). Although Ordnance requested an upgrade of all M4 carriages to M4A1, this process was not completed.[1] Another change was a threaded barrel end to accept a big five-port muzzle brake (gun M3A1, adopted on 5 March 1942). According to some sources, the latter was intended to avoid kicking too much dust in front of the gun, which hindered aiming; however, the brake turned out to be a safety problem when firing canister ammunition and consequently the M3A1 went into combat without the muzzle brake.[1] Other sources mention the muzzle brake was intended to soften a recoil and they say that it was dropped simply because additional recoil control measures were not really needed.[2][5]

In an attempt to increase the armor penetration of the M3, several squeeze bore adapters (including the British Littlejohn adaptor) were tested; none were adopted. Experiments with rocket launchers on the M4 carriage (e.g. 4.5 in (110 mm) rocket projector T3) did not produce anything practical either.[1]

The barrel was of one-piece forged construction, with uniform rifling (12 grooves, right-hand twist, one turn in 25 calibers). The breech end of the barrel was screwed into a breech ring. The breech mechanism was of vertical sliding-block type. The barrel was fitted with a hydrospring recoil system.[6]

The carriage was of split trail type, with pneumatic tires.[6] Mounted on the axle next to the wheels were the "wheel segments"; these were segment-shaped supports that could be lowered to provide more stability in the firing position or raised so that they would not impede movement of the gun.

The telescopic sight on the M6 and both elevation and traverse controls were located on the left side, so one gunner was able to aim the gun. The traverse gear had a release mechanism which allowed free movement of the barrel in case a quick traverse was needed.[6]

Although an earlier organization included divisional anti-tank battalion (two companies of 37 mm guns and one company of 75 mm guns), in December 1941 AT battalions were removed from divisional structure and reorganized as independent tank destroyer battalions; their towed guns were replaced with self-propelled ones as soon as the latter became available.[8]

37 mm guns were also issued to the infantry regiments of the only mountain division formed in the U.S.: the 10th Mountain Division.[10]

Finally, U.S. armored division under organization from March 1942 possessed a total of 68 37 mm anti-tank guns. Of those, 37 belonged to armored infantry regiment (four in each company an one in regiment HQ); 27 to armored engineer battalion; three to divisional train and one to division HQ.[11]

Under the D-series Tables of Organization (TO) from 1 July 1942, the role of AT weapons in Marine Corps service was officially entrusted to 20 mm automatic guns, in regimental weapon company (three platoons) and battalion weapon company (one platoon). In practice, units used the World War I-era 37 mm M1916 for training. They were equipped with the M3 (four in each platoon) before being sent to the frontline. Additionally, a divisional special weapons battalion was equipped with self-propelled 37 mm GMC M6.[12]

Under the E-series TO from 15 April 1943, self-propelled guns in the divisional special weapons battalion were replaced with eighteen 37 mm towed guns in three batteries of six; an infantry regiment had a weapons company with 12, in three platoons of four. The battalion-level AT guns were removed. In total, a division possessed 54 pieces. The F-series TO from 5 May 1944 removed the special weapons battalion from the divisional organization, resulting in a total of 36 guns per division. The subsequent G-series TO reduced regimental weapon companies to two platoons, meaning 24 pieces per division. Although the G-series TO was only adopted on 4 September 1945, in practice in some divisions this change was introduced early in 1945.[13]

The M3 saw action for the first time during the defense of the Philippines in December 1941.[8] It went on to become a factor in the Guadalcanal Campaign, where it was successfully employed against both Japanese armor and infantry.[15] Throughout the war it remained effective against Japanese vehicles, which were thinly armored and were rarely committed in large groups. The light weight of the gun made it easy to move through difficult terrain; for example, when attacked by Japanese tanks on Betio during the Battle of Tarawa, Marines were able to heave the M3 over the 5 ft (1.5 m)-high seawall.[16] While high explosive and canister ammunition proved useful in stopping Japanese infantry attacks, against enemy fortifications the M3 was only somewhat effective because of its small high-explosive projectile. Its overall effectiveness and ease of use meant the gun remained in service with the Marine Corps and with some Army units in the Pacific until the end of the war.[8] Unhappy with the unusually low shield of the M3, some Marine Corps units extended it to provide better protection. These extensions sometimes had a scalloped top edge, intended to improve camouflage. A standard kit was tested in 1945, but was never issued.[17]

The experience of the M3 in the North African Campaign was completely different. The gun was not powerful enough to deal with late production German Panzer III and IV tanks. After the nearly disastrous Battle of Kasserine Pass in February 1943, reports from some of the involved units mentioned 37 mm projectiles "bouncing off like marbles" from the turret and front armor of German medium tanks and proclaimed the gun "useless unless you have gun crews with the guts to stand and shoot from 100 yards".[8] The Army was initially uncertain if these reports reflected the obsolescence of the weapon, or whether unrefined tactics and lack of experience were to blame. Yet on 26 May 1943 a new organization had the M3 replaced by the 57 mm Gun M1 (the U.S.-produced version of the British 6 pdr gun),[note 1] with Dodge 1½ ton trucks as prime movers. Only by spring 1944 did the 57 mm gun reach the battlefield in large numbers.[8]

Meanwhile, the Italian campaign was launched, and M3 guns saw action from the day of the Sicily landing on 10 July 1943. That day the 37 mm guns demonstrated once again both their effectiveness against pre-war tanks—when they helped to repel an attack by Italian Renault R 35s—and inability to cope with modern threats in a subsequent encounter with Tiger Is from the Hermann Göring division. The Italian theater had a lower priority for reequipment than Northwest Europe, and some M3s were still in use in Italy in late 1944.[18]

By mid-1944, the M3 had fallen out of favor even with airborne troops, despite their strong preference for compact and lightweight weapon systems. The Airborne Command had rejected the 57 mm M1 in the summer of 1943 claiming its unfitness for airlifting[19] and the Table of Organisation and Equipment (TO&E) of February 1944 still had airborne divisions keeping their 37 mm guns. Nevertheless, the 82nd and the 101st, were reequipped with British-manufactured 6-pounder gun (57 mm) on carriage Mk III (designed to fit into the British Horsa glider) for the Normandy airdrops. This change was officially introduced in the TO&E of December 1944.[20]

The M3 was phased out of U.S. service soon after the end of the war.[5]

At least in one case, Fifth Army Ordnance in Italy fitted the gun experimentally with fifteen 4.5 in (110 mm) aircraft rockets, in five clusters of three, mounted above the shield.[22]

Variants of the M3 should not be confused with other 37 mm guns in the U.S. service. Those other pieces included M1916 infantry gun of French design (these were later used extensively as subcaliber devices for heavy artillery.),[23] M1 antiaircraft autocannon, M4/M9/M10 aircraft-mounted autocannons, M12/M13/M14/M15 subcaliber guns.

Two tank gun variants were developed based on the barrel of the M3. The first, initially designated M3A1 but renamed M5 on 13 October 1939, was shortened by 5.1 in (130 mm) to avoid damage to the tube in wooded areas. Later, a variant with a semi-automatic breech (with empty cartridge ejection) was developed. This variant—initially designated M5E1, adopted as M6 on 14 November 1940—received a full length barrel. The tubes were interchangeable, but replacing M5 with M6 and vice versa would result in an unbalanced mount and was therefore prohibited.[21] These guns were mounted on several models of tanks and other armored vehicles:

In addition, M3 on different pedestal mounts was mated to a number of other vehicles resulting in an assortment of 37 mm gun motor carriages. Only the M6 reached mass production.

On several occasions, the M3 was mounted on PT boats to increase their firepower. One of these boats was John F. Kennedy's PT-109. The gun with its wheels removed was mounted on wooden planks nailed to the deck.[49]

Armor penetration of the M5 was about 3 mm less at all ranges.[26]

37mm with its prime mover ready for inspection. 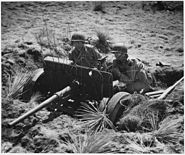 The M3 being unloaded from a transport plane during a military demonstration at Fort Bragg.