The 351st Infantry Regiment was a National Army Infantry Regiment first organized for service in World War I as part of the 88th Infantry Division in Europe. It later served in the Mediterranean Theater during World War II. Since then it has served as a training Regiment, training Army Reserve and Army National Guard Soldiers for service in support of the Global War on Terror.[1][2]

The Doughboys of the Regiment deployed to France as part of the American Expeditionary Forces .[5][6][7] After completing its war service in France it demobilized at Camp Dodge on 7 June 1919.[8]

The Regiment was reconstituted in the Organized Reserves as the 351st Infantry on 24 June 1921 and reassigned to the 88th Division (later redesignated as the 88th Infantry Division) in the Sixth Corps Area.[9][10]

The Regiment was ordered into active military service 15 July 1942 and reorganized at Camp Gruber, Oklahoma using a cadre provided by the 9th Infantry Division.[12] The Regiment participated in the Louisiana Maneuvers in June through August 1943. The Regiment departed Camp Patrick Henry on 4 November 1943 through the Hampton Roads Port of Embarkation as Shipment 8629-H. In July 1943, the Regiment was organized with 3,256 Officers and enlisted men:[13] 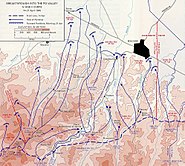 The 351st Infantry was relieved from assignment to the division on 1 May 1947 and served as temporary military Government of the Free Territory of Trieste, securing the new independent State[14] between Italy and Yugoslavia on behalf of the United Nations Security Council.[15] Designated TRUST (Trieste United States Troops), the command served as the front line in the Cold War from 1947 to 1954, including confrontations with Yugoslavian forces. In October 1954 the mission ended upon the signing of the Memorandum of Understanding of London [16] establishing a temporary civil administration in the Anglo-American Zone of the Free Territory of Trieste, entrusted to the responsibility of the Italian Government.[17] TRUST units, which included a number of 88th divisional support units, all bore a unit patch which was the coat of arms of the Free Territory of Trieste superimposed over the divisional quatrefoil, over which was a blue scroll containing the designation "TRUST" in white. The 1948 organization of the Regiment called for a strength of 3,774 Officers and enlisted men organized as below:

Under the 84th Training Division[18]

The 351st Infantry was redesignated as the 351st Regiment, and reorganized to consist of the 1st, 2d, and 3d Battalions, elements of the 84th Division (Training) on 31 January 1968. On 16 September 1995, the Regimental Headquarters and the 3rd Battalion were inactivated.

The 1st Battalion is a Regular Army unit assigned to the 181st Infantry Brigade at Fort McCoy, Wisconsin with a mission to train Brigade Support Battalions.

The 2nd Battalion is an Army Reserve unit with a mission to train Combat Support and Combat Service Support units.
The 3rd Battalion is an Army Reserve unit assigned which provides Observer, Controller/ Trainers (OC/T) and Staff to various Mobilization Training Centers responsible for conducting post mobilization training to Reserve Component units preparing them for deployment to Overseas Contingency Operations.