The 315th Airlift Wing (315 AW) is a wing of the United States Air Force Reserve. It is stationed at Joint Base Charleston, in the City of North Charleston, South Carolina. If mobilzed, the unit would be a component of Air Mobility Command.

The mission of the 315th Airlift Wing is to provide trained personnel to be a source of augmentation for the active forces in any emergency expansion of the Air Force strategic and aeromedical airlift capability. Additionally, the Wing performs peacetime missions and integrates with the active-duty 437th Airlift Wing and the 628th Air Base Wing in their normal Air Mobility Command operations and logistics missions. Both of these units are assigned to Joint Base Charleston, S.C.

Established in 1953 under Far East Air Force in Japan. During the Korean War, the wing flew troop and cargo airlift and airdrop, leaflet drops, spray missions, air evacuation, search and rescue, and other aerial missions in theater as part of Far East Air Forces 315th Air Division. It remained in the Far East after the war to fly transport missions and paratroop training flights in Japan, Korea, French Indo-China, and other points until December 1954, after which it was again inactivated.

Reactivated in 1973 as a heavy transport wing in the Air Force Reserve, being stationed with and used airframes of the 437th Airlift Wing at Charleston Air Force Base, South Carolina. It has since trained Air Force Reserve aircrews for strategic airlift, including channel, special assignment, and combat airlift missions. In 1980s and 1990s, personnel participated in contingency and humanitarian airlift operations and exercises worldwide. In 1994, the wing conducted the first C-17 Globemaster III flight with an all-Air Force Reserve crew. It also took part in the first joint U.S. – Russian exercise that year. Last C-141 retired in 2001; flying exclusively C-17s afterward. 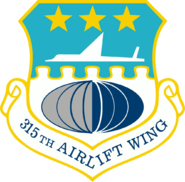 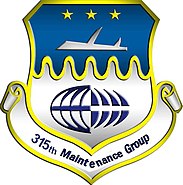