The Hellenic Army's first attempt to form an armoured/mechanized division was the 19th Mechanized Division in early 1941, which was destroyed during the German invasion of Greece.[1] These efforts were resumed after Liberation, with mechanized units being established in 1945 and fighting in the Greek Civil War of 1946–49. The same period saw also the arrival of the first true tanks in Greece, the British Centaur tanks, which only began to be employed in 1947.[2] From 1950 on, the Hellenic Army began receiving M24 Chaffee tanks and M18 Hellcat tank destroyers.[3] In 1954, 9th Infantry Division was converted into an armoured division, comprising two Battle Commands (Διοικήσεις Μάχης, ΔΜΑ). Due to the severe lack of tanks and other armoured vehicles, the division was armoured in name only. In 1956 the 9th Armoured Division was converted into the 20th Armoured Division began being formed in 1954, which was gradually formed over the next four years.[3] With the arrival of the first M47 Patton tanks in 1957, the first Medium Tank Battalions (Επιλαρχίες Μέσων Αρμάτων, ΕΜΑ) of 55 tanks each, were formed.[3] From 1964, the division began receiving the first M48 Patton tanks and M113 armoured personnel carriers, which began replacing older material.[4] By 1971, sufficient numbers of M48 tanks had arrived so that three new Medium Tank Battalions, 24th, 25th, and 26th, so that each Battle Command comprised two Medium Tank Battalions.[5] In 1977–79, the Battle Commands were formed into independent Armoured Brigades, with 3rd Battle Command forming the 23rd Armoured Brigade, 1st Battle Command forming the 24th Armoured Brigade, and 2nd Battle Command forming the 25th Armoured Brigade. 20th Division remained as an operational headquarters coordinating the latter two brigades. In 1985, 25th Armoured Brigade passed directly under IV Army Corps, and was replaced by 22nd Armoured Brigade.[6]

The division completed its formation in 1960, comprising the following units:[4] 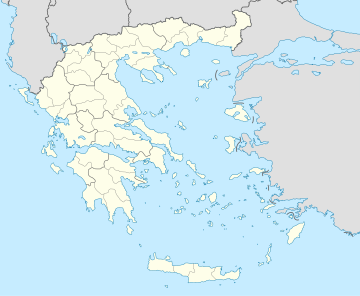 The emblem depicts a Centaur ready to fire an arrow. The body of the horse symbolizes strength and aggressiveness of armor/cavalry, and the human body symbolizes the soldier who controls the vehicle and directs the weapon.

The motto of the 20th Armored Division is "In The Shade" (Greek: Υπό σκιή, Ypo Skii). The phrase is attributed to the Spartan soldier Dienekes, who on the eve of the Battle of Thermopylae, was told by a native of Trachis that the Persian archers were so numerous that their arrows would block out the sun. Dienekes replied with a laugh, "Good. Then we will fight in the shade."