The 1991 siege of Kijevo was one of the earliest conflicts in the Croatian War of Independence, where the Yugoslav People's Army (JNA) led by Ratko Mladić and the forces of SAO Krajina under Milan Martić besieged the Croat-inhabited village of Kijevo. The first part of the blockade took place in late April and early May 1991—lifted after negotiations in the aftermath of large protests against the JNA in Split.

The JNA renewed the blockade in mid-August. Kijevo was captured on 26 August, and subsequently looted and torched. The fighting in Kijevo was significant as one of the first instances when the JNA openly sided with the SAO Krajina against Croatian authorities. The ethnic cleansing of Kijevo was later prosecuted by the International Criminal Tribunal for the former Yugoslavia and Croatian judiciary.

In 1991, Kijevo was a village of 1,261 people, 99.6% Croats, but surrounded by ethnic Serbian villages of Polača, Civljane and Cetina.[1][2] The ethnic Serbian villages had become part of the self-proclaimed SAO Krajina in 1990 through the so-called Log Revolution. Since 17 August 1990, Kijevo was surrounded by barricaded roads in Polača and Civljane,[3] and Kijevo's population set up an ad hoc militia;[4] the villagers smuggled weapons through mountain paths while keeping a distance from a nearby newly created outpost of the Yugoslav People's Army (JNA).[5]

Following the Plitvice Lakes incident of 1 April 1991, the SAO Krajina troops captured three Croatian policemen from Drniš intending to exchange them for prisoners of war captured at the Plitvice Lakes. The militia established by residents of Kijevo in turn captured several ethnic-Serb civilians and demanded the policemen be released in exchange for their prisoners.[4] On 2 April, JNA intelligence officers reported on this, and warned how local militias in Kijevo and Civljane, otherwise separated by barricades, were engaged in armed skirmishes that threatened to escalate.[4] Kijevo became strategically significant because its location hindered SAO Krajina road communications.[1] 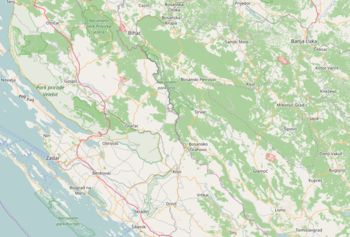 Benkovac
Map of the region

In the night of 27/28 April, a group of Croatian Ministry of the Interior officers managed to reach Kijevo,[5] and a Croatian police station was formally established in the village on 28 April.[6] The following day,[7] JNA troops, commanded by the JNA 9th (Knin) Corps chief of staff Colonel Ratko Mladić, moved in,[8] cutting all access and preventing delivery of supplies to Kijevo.[1] As the JNA subsequently entered the village to enforce the blockade, the civilians in Kijevo formed a human shield to protect the police station building, starting a standoff.[5] On 2 May,[9] a Croatian police helicopter made an emergency landing in Kijevo after sustaining damage caused by SAO Krajina troops gunfire. The helicopter was carrying then defence minister Luka Bebić and Croatian Parliament deputy speaker Vladimir Šeks. The aircraft was able to take off after repairs the same day.[10] Another skirmish took place on 2 May on Mount Kozjak, where a member of the SAO Krajina paramilitary was killed while on guard duty.[11]

Croatian President Franjo Tuđman called on the public to bring the siege to its end, and the plea resulted in a large-scale protest against the JNA in Split,[8] organised by Croatian Trade Union Association in the Brodosplit Shipyard on 6 May 1991.[12] On 7 May, 80 tanks and tracked vehicles and 23 wheeled vehicles of the JNA 10th Motorised Brigade left barracks in Mostar only to be stopped by civilians ahead of Široki Brijeg west of Mostar. The convoy remained in place for three days as the crowd demanded the JNA to lift the siege of Kijevo. The protest ended after Alija Izetbegović, President of the Presidency of Bosnia and Herzegovina visited and addressed the protesters assuring the crowd the convoy was heading to Kupres rather than Kijevo. Tuđman and Cardinal Franjo Kuharić sent telegrams to the protesters supporting Izetbegović.[13] The siege of Kijevo was lifted through negotiations few days later, two weeks after the blockade was imposed.[1]

The May arrangement proved short-lived, as the JNA units, again led by Mladić, put up barricades to prevent entry into the village on 17 August 1991. The next day, Croatian Serb leader Milan Martić laid down an ultimatum to the police and inhabitants of Kijevo, asking them to leave the village and its vicinity within two days or face an armed attack.[14][15]

On 26 August, the JNA attacked Kijevo, opposed by 58 policemen armed with small arms only and commanded by police station chief Martin Čičin Šain. Between 05:18 and 13:00, the JNA fired 1,500 artillery shells against the village, and the Yugoslav Air Force supported the attack with 34 close air support sorties. The same afternoon, the JNA mounted a ground force assault on Kijevo.[18] According to Martić, each house in Kijevo was fired upon.[19] The attacking force consisted of approximately 30 tanks supported by JNA infantry and Croatian Serb militia.[20]

The JNA entered the village by 16:30.[18] Lieutenant Colonel Borislav Đukić, in command of the Tactical Group-1 tasked with capture of Kijevo and the commanding officer of the JNA 221st Motorised Infantry Brigade, reported that the village was secured by 22:30.[21] The Croatian police fled Kijevo in three groups via Mount Kozjak towards Drniš.[18] The remaining Croatian population left after the artillery had destroyed much of their settlements.[22][23] The retreating groups were pursued by the Yugoslav Air force jets as they made their way across the Kozjak.[24] The reporter of Radio Television Belgrade Vesna Jugović recorded these events. Krajina units commanded by Martić acted in concert with JNA to take command of the area.[25]

The clash between the Croatian forces and the JNA in Kijevo was one of the first instances where the JNA openly sided with the insurgent Serbs in the rapidly escalating Croatian War of Independence,[22] acting based on Martić's ultimatum.[19] The defending force suffered only two wounded, but one of the retreating groups was captured.[18] The group, consisting of 20 men,[26] were later released in a prisoner of war exchange.[18] The JNA suffered no casualties.[21] After the JNA secured Kijevo, the village was looted and torched.[20][24] The destruction of Kijevo became one of the most notorious Serb crimes in the early stages of the war.[27] The JNA units which took part in the fighting in and around Kijevo advanced towards Sinj in the following few days, capturing Vrlika before being redeployed to take part in the Battle of Šibenik in mid-September.[20]

At the International Criminal Tribunal for the former Yugoslavia, the trial of Milan Martić resulted in a guilty verdict with regard to Martić's involvement on Kijevo, and the findings of the Trial Chamber in 2007 regarding Kijevo were confirmed by the Appeals Chamber in 2008, based on witness testimonies about it being ethnic cleansing.[16] The siege of Kijevo was the first instance of application of the strategy of ethnic cleansing in the Yugoslav Wars.[28] The events at Kijevo were not included in the indictment at the trial of Ratko Mladić, but the Croatian judiciary tried Mladić in absentia for war crimes committed in Kijevo. He was convicted and sentenced to 20 years in prison.[29]