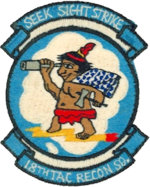 The 18th Reconnaissance Squadron (18 RS) is a squadron of the United States Air Force. It is assigned to the 432d Operations Group, and stationed at Creech Air Force Base, Nevada.

Activated as part of IV Fighter Command in early 1943, the squadron engaged in the Air Defense of the San Francisco area as well as a RTU until the end of 1943. It trained as a P-51 operational squadron and deployed to the European Theater of Operations (ETO), where it was assigned to IX Fighter Command in England. It operated both as a tactical fighter squadron, providing air support to Allied ground forces in France as well as an air defense squadron, attacking enemy aircraft over Europe.

In August 1944, the squadron was redesignated as the 161st Tactical Reconnaissance Squadron carrying out photo-reconnaissance missions. The unit was inactivated in November 1945.

Reactivated in 1945 at Brooks Field, Texas under the 363d Reconnaissance Group, it trained with the RF-80A Shooting Star. The 18th moved to Langley Field in 1947 when Brooks was transferred to SAC (Strategic Air Command). The squadron was reassigned directly to the Fourteenth Air Force in 1949 when the 363d was inactivated and moved to Shaw AFB, South Carolina.

The unit was reassigned to the 363d when the group was re-activated at Shaw on 2 Apr 1951. It became a training squadron with a mission to provide photographic intelligence training to support both air and ground operations by American or Allied ground forces. Upgraded to the RF-84F Thunderstreak in 1954, it continued training operations until 1957 when it re-quipped with the RF-101C Voodoo.

The squadron was reassigned to the 66th Tactical Reconnaissance Group and deployed to NATO in 1957. It operated from France until 1966, moving to RAF Upper Heyford, England. It remained in the UK until 1970, when it returned to Shaw AFB and was assigned to the 363d Tactical Reconnaissance Wing. It was re-equipped with the RF-4C Phantom II at Shaw and performed training for new photo-reconnaissance pilots until 1979 when it was inactivated due to budget reductions.