Military Wiki
Register
Don't have an account?
Sign In
Advertisement
in: Articles incorporating text from Wikipedia, 150 mm artillery, Artillery of Germany,
and 3 more

The 15 cm schwere Feldhaubitze 1902 was a German heavy field howitzer introduced in 1903 and which served in World War I.

It was the first artillery piece to use a modern recoil system in the German Army. Some 416 were in service at the beginning of the war.[1] Its mobility, which allowed it to be deployed as medium artillery, and fairly heavy shell gave the German army a firepower advantage in the early battles in Belgium and France in 1914[2] as the French and British armies lacked an equivalent. 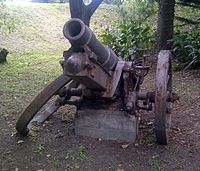 The remains of a German sFH 02 howitzer located in Kei Mouth, South Africa. It was captured from German forces in South West Africa during world War I. Like other such German weapons of the time, it was cast with the markings R II Ultima Ratio Regum ("last argument of kings").