Military Wiki
Register
Don't have an account?
Sign In
Advertisement
in: Articles incorporating text from Wikipedia, Cavalry regiments of the United States Army

First Squadron, 153rd Cavalry "Darkhorse" is headquartered in Panama City, Florida with units throughout the Panhandle. It was formerly 3rd Battalion, 124th Infantry and officially re-designated to cavalry on 1 September 2007 when the 53rd Infantry Brigade converted from a "separate brigade" to the brigade combat team structure.

Prior to 2006-07 when the Army transformed brigades into brigade combat teams (BCT), the brigade reconnaissance unit was only a single troop; in the 53rd Infantry Brigade it was E Troop, 153rd Cavalry in Ocala. The 2006-07 BCT reorganization disbanded E Troop altogether and converted the 3rd Battalion "Warrior", 124th Infantry into what is the 1st Squadron, 153rd Cavalry. Though E Troop and 1st Squadron share the same coat of arms, 1-153 Cavalry was constituted entirely from the infantrymen of 3-124 Infantry and so continue the 3rd Battalion's lineage.[2]

In 1968 a 3rd Infantry battalion of the 124th Infantry was reconstituted and remained a light infantry battalion until 2006-2007 when the battalion converted into the 1-153rd Cavalry Squadron. They specialized in jungle fighting and made many rotations to Fort Sherman, Panama to conduct annual training.

3rd Battalion, 124th Infantry was mobilized just prior to Christmas 2002 and moved up to Fort Stewart, GA for training. Most of the battalion deployed to Kuwait in January and were part of the initial invasion of Iraq. One company was attached to the 4th Infantry Division and was on a ship waiting orders to invade through Turkey before Turkey denied U.S. forces entry. Companies of the battalion were attached to 108th Air Defense Artillery Brigade, 3rd Infantry Division, and 1st Marine Division during the invasion. In 2004 when 3rd ID left, 3-124 Infantry was attached to 1st Armored Division. The battalion was assigned to downtown Baghdad.

Three years after the cavalry transformation the squadron was mobilized and deployed with the 53rd Infantry Brigade Combat Team in support of Operations Iraqi Freedom and New Dawn. In preparation for their 2010 deployment, the squadron underwent intense pre-mobilization training at Camp Blanding, FL for the entire month of October 2009. They mobilized under Title 10 orders on 2 January 2010 and flew to Fort Hood, Texas for two months of mobilization training. In the first week of March the squadron arrived at Camp Buehring, Kuwait. B Troop deployed to Qatar for a security force mission. HHT, A, and C Troops were stationed at Camp Buehring, Kuwait. A Troop controlled Khabari Crossing at the border of Iraq. C Troop was responsible for quick reaction force (QRF) missions around Camps Buehring and Virginia and an area reaction force mission (ARF) for northern Kuwait. The squadron redeployed and demobilized at Fort Stewart, GA in December, 2010. 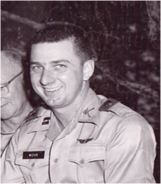 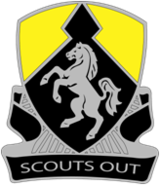 Troop E, 153rd Cavalry was first organized in Tallahassee in 1964 as the mounted reconnaissance element of the 53rd Armored Brigade. The troop had tanks and armored personnel carriers (APCs). In 1968, a 3rd Infantry battalion was constituted when the 53rd Armored Brigade was re-flagged as the 53rd Infantry Brigade and the Tallahassee unit became A Company, 3rd Battalion, 124th Infantry. Troop E was reactivated in Ocala, Florida and deployed to Afghanistan in 2005. The Ocala-based Troop E was disbanded during the Brigade Combat Team reformation in 2006-2007.