The 14.5×114 mm (.57 Cal) is a heavy machine gun and anti-materiel rifle cartridge used by the Soviet Union, the former Warsaw Pact, modern Russia, and other countries.

It was originally developed for the PTRS and PTRD anti-tank rifles, but was later used as the basis for the KPV heavy machine gun that formed the basis of the ZPU series anti-aircraft guns that is also the main armament of the BTR series of armoured personnel carriers from the BTR-60 to the BTR-80.

The 14.5×114 mm has 42.53 ml (655 grains H2O) cartridge case capacity. The exterior shape of the case was designed to promote reliable case feeding and extraction in bolt action rifles and machine guns alike, under extreme conditions. 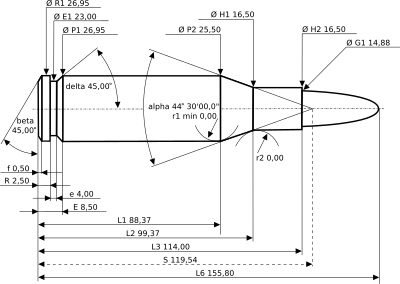 According to the official guidelines the 14.5×114 case can handle up to 360 MPa (52213 psi) piezo pressure. In C.I.P. regulated countries every rifle cartridge combo has to be proofed at 125% of this maximum C.I.P. pressure to certify for sale to consumers.

Cartridges use lacquered steel cases and a percussion primer. Some countries also use brass cartridge cases. The propellant consists of 28.8 g smokeless powder with seven tubes, designated as 5/7NA powder. Two different versions of bullet series are known, the earlier had a conventional bullet jacket with boat-tail. These had a long engraving portion that caused considerable barrel wear. The newer bullet types have a smaller engraving portion with a rounder boat-tail and were used from about 1957 on.