Military Wiki
Register
Don't have an account?
Sign In
Advertisement
in: Pages with broken file links, Articles incorporating text from Wikipedia, Squadrons of the South African Air Force, Military units and formations of South Africa in the Border War

121 Squadron SAAF was a South African Air Force squadron formed in 1974 to operate the British Tigercat surface-to-air missile systems in an air defence role. The unit was disbanded when the Tigercat system was retired from service in the early 1990s.

The Hilda system was issued to the 250 Air Defence Artillery Group of the South African Air Force, which equipped its 121 and 123 Squadrons with them. The Squadron was based initially at AFB Waterkloof and then Pienaarsrivier.

Live fire training was held at the St Lucia range in northern Natal.

Each Hilda system consisted of a trailer mounted Director and Launcher towed by diesel Land Rovers. The Launcher loaded three missiles at a go. A five-man complement, a generator and spare missiles were issued to each complement. The launcher and director was deployed by setting up the jacks and were connected to each other via cable link. The operator would launch a missile and guide it along a line of site to an approaching enemy aircraft by a joystick, issuing a radio command. The Hilda missile was small and subsonic, powered by a two-stage rocket motor and steered by four swept wings and stabilised by four tail fins. 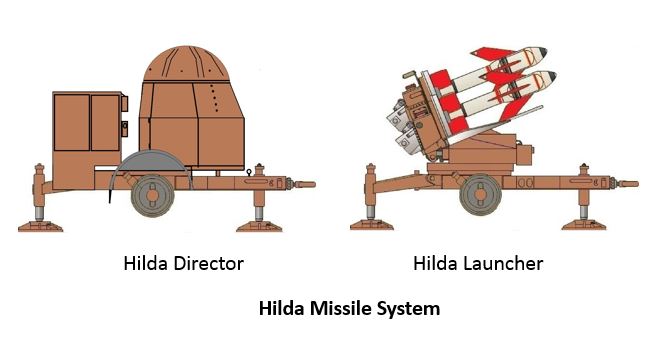 A Hilda missile, similar to that operated by 121 Squadron.