The 12.7×108 mm cartridge is a heavy machine gun and anti-materiel rifle cartridge used by the former Soviet Union, the former Warsaw Pact, modern Russia, and other countries.

It is used in the same roles as the NATO .50 BMG (12.7×99mm NATO) cartridge. The two differ in bullet shape and weight, and the casing of the 12.7x108mm is slightly longer and thicker, allowing it to hold slightly more of a different type of powder. The 12.7x108mm can be used to engage a wide variety of targets on the battlefield, and will destroy unarmored vehicles, penetrate lightly armored vehicles and damage external ancillary equipment (i.e.: searchlights, radar, transmitters, vision blocks, engine compartment covers) on heavily armored vehicles such as tanks.[1] Armor piercing .50 cal ammunition will penetrate around 25 mm of armor. Normal full metal jacket .50 cal ammunition will only dimple tank armor, causing no damage.

In the Finnish Defence Forces, the NSV chambered in 12.7×108 is used primarily in an anti-aircraft role by all branches.[2] 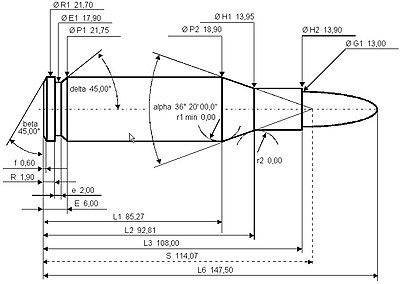 Americans would define the shoulder angle at alpha/2 ≈ 18.16 degrees.

According to guidelines the 12.7×108mm case can handle up to 360 MPa (52,213 psi) piezo pressure. In C.I.P. regulated countries every rifle cartridge combo has to be proofed at 125% of this maximum CIP pressure to certify for sale to consumers.

It is often claimed that the US .50 BMG (12.7×99mm NATO) cartridge can be fired in Soviet/Russian 12.7×108mm machine guns. The 12.7×108mm was even called a “.51-caliber.” This often claimed interchangeability is an assumption made from the 12.7×108mm being listed as “.511-caliber” in US intelligence publications during the Vietnam War. The bullets used for both cartridges are ~.51 inches in diameter. .50 caliber, 1/2 of an inch, is the diameter of the hole bored down the barrel of the gun first. Then rifling is cut all around the bored hole to a depth of .005". Thus, .500 + .005 + .005 = .510." Upon firing the bullet engages the rifling, and .005" grooves are pressed into the surface of the bullet to impart spin to stabilize the bullet. Despite the similar bullet diameters, the dimensional differences between the two cartridges would prevent either being correctly chambered in a firearm designed for the other.