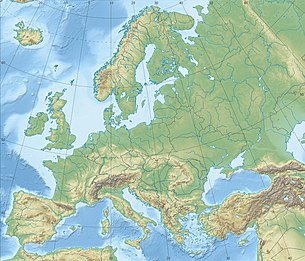 The 11th Guards Mechanized Brigade is a unit of the Armed Forces of Belarus based in Slonim. The 11th Guards Brigade traces its history back to the 1942 formation of the 6th Tank Corps of the Soviet Army during World War II.

Formed in the Kalinin area on 19 April 1942, the 6th Tank Corps was under the command of Major General A. L. Getman and subordinated to the Western Front until March 1943, at which time the corps was subordinated to the 1st Tank Army, remaining under the command of this formation until 1992. The corps fought at Rzhev in 1942 and Kursk in 1943.[1] The 6th Tank Corps commanded the 22nd, 100th, and 200th Tank Brigades, as well as the 6th Motor Rifle Brigade.[2]

In April 1945 during the Battle of Berlin, the 11th Guards Tank Corps was part of the 1st Guards Tank Army.[4] It commanded the 40th, 44th, and 45th Guards Tank Brigades, as well as the 27th Guards Motor Rifle Brigade.[5]

At some point following relocation, the division was reorganized and renamed the 11th Guards Mechanized Brigade.

An 11th Tank Corps also existed but was a different unit.