The 11 Luchtmobiele Brigade, or 11 Air Manoeuvre Brigade is a rapid and light infantry unit within the Dutch forces and can be deployed anywhere on the globe within five to twenty days to defend its own or allied territory, protect the international rule of law and support law enforcement, disaster relief and humanitarian aid. Deployment can be as part of NATO, United Nations or WEU (West European Union).

When the Air Mobile Brigade, an Army brigade, operates integrated with the Dutch Defence Helicopter Command, an Airforce command, they form the '11 Air Manoeuvre Brigade' (11 AMB).

In 2003 in Poland (exercise Gainful Sword) and in 2012 in the Netherlands (exercise Peregrine Sword) the brigade had and succeeded for its operational readiness test to (re)apply for its 'Air assault' status. Passing the test it proved to be able to run a brigade operation with the Air Mobile Brigade and Defence Helicopter Command integrated as the 11 Air Manoeuvre Brigade.

The world's security situation changed drastically after the fall of the Berlin wall in '89. In the Netherland arose the need for a rapid reaction force for global operations in the entire warfare spectrum. In '92 11 Air Manoeuvre Brigade was created. It became unfavorable for the Dutch government to sent 'drafties' on missions and this brigade was put together with volunteers from other units. After 10 years of pioneering the brigade got its operational readiness state in October 2003.

The emblem of 11 Air Manoeuvre Brigade is a praying Falcon on a maroon shield with two crossed swords underneath. The color is related to the color of the baret. Air assault infantry distinguish itself by the baret and is allowed to wear it after completing the Air assault infantry training. The maroon baret is the international standard for air landing troops. (although the effort to deserve to wear it differs per country)

Emblem of the Multi National Division 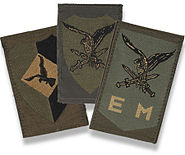 11 Air Manoeuvre Brigade is part of the Dutch forces and therefore shares its aims;

11 Air Manoeuvre Brigade is known for its ability to be rapidly deployed and its mobility. Operations can be performed either by foot, using light vehicles or using airlift capabilities (helicopters or airplanes) from the Airforce. A share of the brigade (three paracompanies, three reconnaissance platoons, the pathfinderplatoon and some of the combatsupport and supportunits) can be deployed as paratroopers.

These forms of airlanding make the brigade effective in operating behind the enemy frontline to occupy strategic locations like bridges till being relieved by mechanized infantry and cavalry. Another task is the destruction of strategic targets, evacuation of personnel, collection of intelligence during raids with infiltration and exfiltration either by ground or by air.

(11 Mortar company and 11 Air Defense company were disassembled after the budgetcuts in April 2011. Their tasks have been taken over by the artillery and anti-air artillery)

Organization of a battalion

Organization of an infantry company

Organization of a patrol company

11 Air Manoeuvre Brigade has patrol companies since 2011. A patrol company consists of a staff, two patrol platoons, a reconnaissance platoon and a battalion's role 1 medical unit.

During missions in Afghanistan the need for independently operating units with high mobility and great firepower arose. The light 'Luchtmobiel Speciaal Voertuigen' from 11 Staff/Anti-tank company were replaced by Mercedes Benz 4x4 vehicles which are rebuilt ambulances. The new vehicles are manned by three instead of two infantrymen and equip a Browning M2 .50 machinegun, two light Minimi 5.56 machineguns and an OGill (Spike) medium range anti-tank missile and advanced optics. This setup makes independent and offensive operating possible. An area can rapidly be dominated and stabilized. The pilot with new equipment, setup in personnel and new tactics took 1.5 years before becoming the official organization.

The reconnaissance platoons are the eyes and ears of the battalion commander. As a platoon or in squads they try to figure out the strength, size and intentions of enemy forces.

The Pathfinder platoon is part of the brigade's staffsupport company. The pathfinders are brigade recce's and specialists in reconnaissance and marking of dropzones and landingzones for helicopters and paratroopers. They are also able to operate for Tactical Air Landing Operations and operate in small squads of 6 men. Their deployment can be by foor, parachute, helicopter (spie-rig and fastrope) or vehicle.

The engineers company consist of engineer recce's, advanced search teams, engineer platoons and a construction squad. The company supports with mobility and counter-monility. Mobility support enables friendly troops to move around unobstructed by detecting and removing IED's (Improvised Explosive Devices), clearing minefields or building bridges. Counter-mobility obstructs enemy troops by putting up obstacles. The company operates integrated with the infantry battalions. The engineer recce's can operate with scuba gear and makes them perfect to operate in and close to water. The recce's and advanced search teams are part of the EARS platoon (Engineers Advanced Reconnaissance and Search).

The soldiers with the maintenance company repair motorcycles, 4x4's, trucks, armament and electronics. They are able to not only do repairs on base, but also in the field. Mechanics can apply battle damage repairs close to the frontline.

The supply company organizes the supply of ammunition, food, water and spare parts wherever the brigade operates. There is a wide variety of vehicles available, from large trucks and forklifts to small airmobile vehicles (LSV). The company also has an important role in transporting personnel and materials to the area of operations by helicopter and manages all needed equipment to do so.