View source
watch 01:36
We're Getting Mutants in the MCU - The Loop
Do you like this video?
Play Sound
This article is about the ammunition cartridge. For lengths on the order of 10 millimeters (1 centimeter), see Orders of magnitude (length).

Although it was selected for service by the Federal Bureau of Investigation in 1989 from the aftermath of the 1986 F.B.I. Miami Shootout, the cartridge was later decommissioned (except by the Hostage Rescue Team and Special Weapons and Tactics Teams) after their Firearms Training Unit eventually concluded that its recoil was excessive in terms of training for average agent/police officer competency of use and qualification,[10] and that the pistols chambered for the caliber were too large for some small-handed individuals. These issues led to the creation and following replacement to a shorter version of the 10mm that exists today as the .40 Smith & Wesson. The 10mm never attained the mainstream success of this compact variant, but there is still an enthusiastic group of supporters who often refer to the .40 S&W as the ".40 Short & Weak".[11]

The 10mm Auto cartridge was originally drafted and championed by eminent firearms expert Lieutenant Colonel John Dean "Jeff" Cooper (May 10, 1920 – September 25, 2006; U.S.M.C., Ret.). It was designed to be a medium-velocity pistol cartridge with better external ballistics (i.e., flatter trajectory, greater range) than the .45 ACP and capable of greater stopping power than the 9×19mm Parabellum. When FFV Norma AB designed the cartridge at the behest of Dornaus & Dixon Enterprises, Inc. for their Bren Ten pistol (a newly developed handgun with design inspired by the CZ 75), the company decided to increase the power over Cooper's original concept. The resulting cartridge—which was introduced in 1983 and produced since—is very powerful, containing the flat trajectory and high energy of a magnum revolver cartridge into a relatively short, versatile rimless cartridge for a semi-automatic pistol.[10]

One of the first issues with its early acceptance and prosperity was the result of quality problems in consequence from rushed production to meet copious (some even defaulted) pre-orders of the pistol it was originally—as well as then being only—chambered for: the Bren Ten.[12] An example being the peculiar circumstances surrounding the pistol's distribution at its primary release, leading to a number of initial Bren Tens sent to dealers and customers without magazines (the magazines themselves also had complications).[13] The relatively high price of the Bren Ten compared to other pistols of the time (manufacturer's suggested retail price in 1986 was U.S. $500) also contributed, and the company was eventually forced to declare bankruptcy, ceasing operations in 1986 after only three years of inconsistent, substandard production. Had it not been for Colt's Patent Fire Arms Manufacturing Company making the unexpected decision in 1987 to bring out their Delta Elite pistol (a 10mm Auto version of the M1911) and later, the F.B.I.'s adoption of the caliber in 1989, the cartridge might have sunk into obsolescence, becoming an obscure footnote in firearms history.

Due to media exposure in the television series Miami Vice, where one of the lead protagonist had used the pistol as his primary signature weapon, demand for the Bren Ten increased after manufacturing ceased. In the succeeding five years, prices on the Standard Model rose to in excess of U.S. $1,400, and original magazines were selling for over U.S. $150.[14]

The briefly field-tested the 10mm Auto using a M1911 pistol platform and a Thompson Model 1928[15] submachine gun before adopting the Smith & Wesson Model 1076 in 1990; a short barreled version of the Model 1026 with its slide-mounted decock/firing pin block safety supplanted by only a frame-mounted decocker. A contract was also signed with Heckler & Koch to produce a specialized quantity of the MP5 utilizing the cartridge, designated MP5/10 for use by the H.R.T. and S.W.A.T. Since 1994, both units still field the weapon and caliber to this day.[1][2] During testing of the caliber in 1988, it was decided that the full-power commercial load of the 10mm Auto was the best for law enforcement usage amongst all other semi-automatic pistol cartridges of the era, but it also resulted in undesirable recoil for most agents. Thereafter, experimentations were carried out, and a specification for reduced-recoil ammunition was created; later, the requirement was submitted to the Federal Cartridge Corporation for production and followed further review. This became known as the "10mm Lite", or "10mm F.B.I." load, also currently common from various manufacturers today. Along with some pistol reliability problems increasing with this lighter load, Smith & Wesson observed that a version of the 10mm case reduced to 22 millimeters from the original 25 mm could be made with the retained performance parameters of the "10mm Lite". This altered cartridge was named the .40 Smith & Wesson. The shorter case length allowed function in a 9mm Luger chambered pistol; the advantage being that smaller-handed shooters could now have smaller-frame semi-automatic handguns with near—or in some cases, exact—10mm performance. Colloquially called the "Forty Cal" and other synonyms, this innovation has since become a common handgun cartridge among law enforcement agencies and civilians in the U.S., while the popularity of the parent 10mm Auto still exists but has contrastingly diminished.[10] Colt, Dan Wesson Firearms, Glock, Kimber Manufacturing, Nighthawk Custom, Smith & Wesson, STI International and Tanfoglio are some of the few manufacturers that still offer handguns in 10mm Auto. 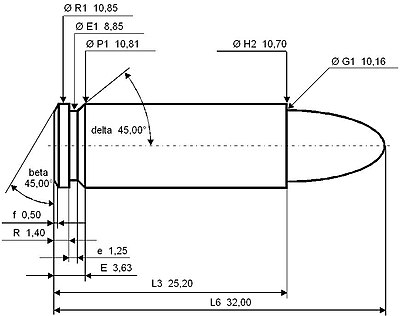 The Commission Internationale Permanente pour l'Epreuve des Armes à Feu Portatives (C.I.P.; Permanent International Commission for Firearms Testing) rulings indicate a maximum pressure of 230.0 MPa (33,360 psi). In C.I.P. regulated countries, every pistol/cartridge combination is required to be proofed at 130% of this maximum C.I.P. pressure to certify for sale to consumers.[7]

At full potential, the 10mm Auto produces energy slightly higher than an average .357 Magnum load and below standard .41 Magnum rounds. The cartridge is considered to be high-velocity, giving it a less-curved flight path (also termed "flat-shooting") relative to other handgun cartridges. In its lighter loadings, the 10mm Auto is an exact duplicate of the .40 S&W cartridge. More powerful loadings can equal or exceed the performance of the .357 Magnum, and retain more kinetic energy at 100 yards than the .45 ACP has at the muzzle.[10]

Some commercial loadings are as follows:

The loads listed above are from a boutique manufacturer of high performance ammunition and are about maximum for S.A.A.M.I. established pressure levels in each cartridge. Free recoil energy computed assuming a 1.1 kilograms (40 oz) handgun. Most major ammunition manufacturers offer 10mm loads closer in performance to the "F.B.I. Load" than the full-power 10mm; these still contain sufficient power for defense applications, but their recoil is more comparable to that of the .45 ACP in similar guns. However, some companies do continue to offer the original full-power ammunition.

The 10mm Auto is marketed for hunting,[22] defensive, or tactical use[23] and is one of the few semi-automatic, rimless cartridges that is legal for hunting white-tailed deer in many U.S. states.[24][25] In regards to its use in personal defense, firearms author Chuck Hawks wrote:

"The most commonly available, reasonably portable, autoloader that might serve our purpose is the Glock Model G20, chambered for the 10mm Auto (.40 caliber) cartridge. The G-20 is as reliable as a powerful auto gets and relatively compact. This pistol comes with a 4.6" barrel, is 7.59" in overall length and weighs only 26.28 ounces. In recent years Glock has promoted the G20 as a hunting pistol."[26]

Today, the cartridge is used as a high-power defense caliber against humans or animals, and for hunting by those who prefer the flatter carry profile and higher cartridge capacity of an automatic pistol versus a magnum revolver.[24] It also makes "Major" power factor ranking in I.P.S.C., even in lighter loadings.[27]

Despite the F.B.I. switching to the .40 S&W, their Hostage Rescue Team, Special Weapons and Tactics Teams, and various other law enforcement agencies in the United States still continue to issue or authorize the use of 10mm including the Coconut Creek Police Department, Plano Police Department, and Weimar Police Department.[28]

In military use, the government of Denmark has issued the Glock 20 to the Slædepatruljen Sirius (Sirius Sledge Patrol) headquartered in Daneborg, Northeast Greenland.[4] The pistols were issued as a defense against polar bears which the unit encounters during patrols.[29][30] 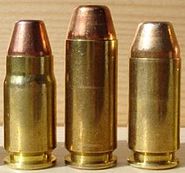