The .505 Gibbs has a unique bullet diameter of .505 in (12.8 mm) while most other .50 caliber bullets have diameters of .510 in (13.0 mm). Barnes Bullets and Woodleigh Bullets are a few of the bullet manufacturers who produce component bullets for reloading in this caliber. Woodleigh Bullets does not recommend impact velocities of over 2,250 ft/s (690 m/s) for their .505 caliber 525 gr. Weldcore bullets.[5]

As of 2013, Norma, Nosler and Kynoch are offering loaded ammunition in 505 Gibbs. Excellent bullets are available from Cutting Edge Bullets, Woodleigh Bullets, and North Fork Bullets.

The .505 Gibbs is one of the most voluminous cases designed. The large volume was required as the cartridge was designed to burn cordite as its propellant. CIP has published specifications for the cartridge. 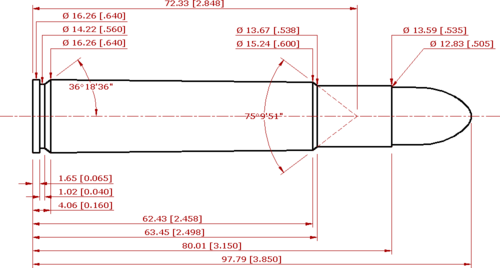 The .505 Gibbs is a niche cartridge, designed for hunting heavy, dangerous game, such as elephant, cape buffalo and grizzly bear.

The cartridge's claim to fame was its use by the fictional character, Robert Wilson, the hunter of Ernest Hemingway's short story The Short Happy Life of Francis Macomber.