The .500 S&W Magnum is a fifty-caliber semi-rimmed handgun cartridge developed by Cor-Bon in partnership with the Smith & Wesson "X-Gun" engineering team for use in the Smith & Wesson Model 500 X-frame revolver and introduced in February 2003 at the SHOT show.[6] Its primary design purpose was as a hunting handgun cartridge capable of taking all North American game species.

Smith & Wesson had been at the forefront when developing powerful handgun cartridges such as the .357 S&W Magnum and the .44 Remington Magnum. However, since 1960 the company's .44 Remington Magnum which it had developed in partnership with Remington, was eclipsed by the .454 Casull. Since then, several other more powerful cartridges had been developed by Action Arms, Linebaugh, Ruger, Wildey and Winchester for repeating handguns.

In 1971 Smith & Wesson had experienced a dramatic surge in orders for their Model 29 revolver in the .44 Magnum cartridge with which S&W production was not able to keep up. Available Model 29 revolvers were being sold for two to three times the suggested retail price, due to the low supply and high demand for the revolver. This surge in demand was due to the Dirty Harry movie, where the Model 29 revolver was billed, incorrectly, as the most powerful revolver. With the entry of the .500 S&W Magnum and the Model 500 revolver, Smith & Wesson recaptured the title of the most powerful handgun,[7] and with it an increase in sales.

The .500 Smith & Wesson Magnum was designed from the outset to be the most powerful production handgun cartridge. S&W product manager Herb Belin proposed the idea of developing the revolver and cartridge to the S&W sales team. With the backing of the sales team, the project was approved by S&W President Bob Scott. The ammunition would be developed by Cor-Bon and Peter Pi in partnership with the S&W X-Gun engineering team of Brett Curry Lead Design Engineer, Rich Mikuta and Tom Oakley. Eleven months later on January 9, 2003 the team unveiled the S&W Model 500 revolver and the .500 S&W Magnum cartridge. According to Belin, the cartridge was designed from its inception to be substantially more powerful than any other production handgun cartridge before it.[6] COR®BON would later go on to develop the .500 S&W Special cartridge. 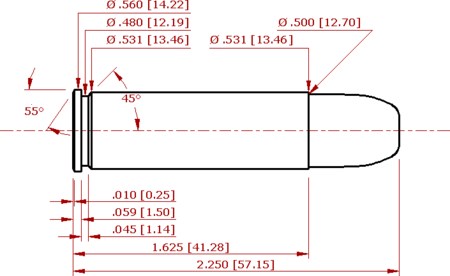 The .500 S&W Magnum has a maximum working pressure of 60,000 psi (4,100 bar). However, most factory ammunition is limited to 50,000 psi (3,400 bar) to help ease extraction of fired cases. The cylinders of the S&W Model 500 revolver are engineered to be capable of withstanding 50% over pressure. Regular proof-load testing is performed at 20% over pressure.[6]

While the overall length is given as 2.300 inches (58.4 mm) by many sources, some revolvers will not be able to accept cartridges with bullets seated to this overall length. This is because the cylinders of the revolvers are too short to accommodate such cartridges. The now-discontinued Taurus Raging Bull 500 is an example of one such revolver. It has a cylinder which is about .200 inches (5.1 mm) shorter than that of the S&W Model 500.[9]

Bullet weights available for this cartridge range from a 265-grain (17.2 g) jacketed hollow point to a 700-grain (45 g) hardcast lead bullet. Moderate velocity, heavy bullet loads for the .500 S&W Magnum are similar in performance to the black powder .50-70 Government.[13]

Low recoil or reduced recoil ammunition is manufactured by the Grizzly Cartridge Company and Winchester. The low recoiling ammunition reduces the recoil by lowering the velocity of the projectile and/or the mass of the projectile.[14] Winchester's reduced recoil X500SW ammunition propels a 350 gr (23 g) bullet at 1,400 ft/s (430 m/s). Although such ammunition is considered low recoiling, due to having about one-third of the recoil energy of full-power .500 S&W ammunition, even these are a significant step up from most of the .44 Magnums, as they produce twice the recoil energy of a latter cartridge.

The .500 S&W Magnum has a very high recoil energy and recoil velocity. The high energy and velocity of the recoil will cause the muzzle to rise when shooting the cartridge. Smith & Wesson incorporated design features to help mitigate both the perceived and actual recoil of their Model 500 Smith & Wesson revolver chambered for the .500 S&W Magnum. The revolver is equipped with a compensator and Hogue Sorbothane grips. The revolver's considerable weight of 56–82 ounces (1,600–2,300 g)[16] plays a major role in moderating the recoil of the cartridge.[17]

A double-discharge effect is sometimes observed with the cartridge. The heavy recoil causes some shooters to inadvertently squeeze the trigger as a reflexive action to hold on to the revolver soon after the discharge of the previous round. Furthermore, some shooters have experienced the cylinder unlocking and rotating after the firing of cartridge which is a partial manifestation of the same phenomenon.[18]

The .500 S&W Magnum was designed to be primarily a handgun hunting cartridge. It also serves a secondary purpose as a back-up survival handgun cartridge as a defense against the large bears of North America.[19] Due to its power, recoil and size, the 500 S&W Magnum is a poor self-defense or concealed-carry weapon, especially in an urban environment.

The .500 S&W Magnum's success with large dangerous game is in part due the availability of heavier bullets with exceptional sectional densities. Bullets above 500-grain (32 g) have the sectional densities required for hunting heavier African dangerous game. As a hunting cartridge the .500 S&W Magnum has been found to be effective against elephant and African buffalo as long as ranges are kept within reasonable limits.[20][21] Bullet selection is extremely important when hunting thick-skinned dangerous game. Smith & Wesson bills the Model 500 revolver as "A Hunting Handgun For Any Game Animal Walking".[19]

The .500 S&W Magnum is available in firearms more convenient to carry than a full-sized rifle. This lends to its use as a defensive carry firearm in areas where dangerous predatory species may be encountered. The .500 S&W Magnum cartridge has found use in survival guns such as the NEF Handi Rifle and the S&W Survival Kit. It is carried in Alaska for defense against the bears.[6] Smith & Wesson manufactures a 2.75-inch-barrel (70 mm) version of the Model 500 revolver (model 500ES), which is included in the S&W Survival Kit. This shorter-barreled revolver is handier, weighing 56 oz (1.6 kg) and has no muzzle brake as are included with the more common Model 500 8.375 in (212.7 mm) revolvers.

Currently there are a few revolvers which are capable of firing the .500 S&W Magnum:

Each holds only five rounds to allow for thicker cylinder walls to accommodate the pressure generated by the large and powerful cartridge. The single shot Thompson-Center Encore, NEF Handi Rifle, and Towner pump rifle are also chambered for this round.[13] It is currently the most powerful production handgun cartridge available.

Ammunition for the .500 S&W Magnum is available from many mainstream ammunition manufacturers. Recently many of these manufacturers have expanded their .500 S&W offerings, which speaks to the popularity of the cartridge.