The .500 Linebaugh cartridge was designed by John Linebaugh of Maryville, Mo. in 1986. John Linebaugh had been converting .45 Colt six-shooters to five-shot revolvers, thus offering a stronger cylinder which could withstand the firing of higher pressure .45 Colt ammunition. While this venture was successful, he continued to search for a more powerful cartridge which resulted in the .500 Linebaugh.[1]

The cartridge case itself was designed by cutting off the .348 Winchester case to 1.405 in (35.7 mm), turning the rim to a diameter of .610 in (15.5 mm) and opening the case mouth to accept a .510 caliber (12.9 mm) bullet. The first revolvers converted to use the .500 Linebaugh were the Ruger Bisley and the Seville revolvers. Due to the demise of the Seville revolvers in the early 1990s all subsequent conversions have been carried out on revolvers based on the Ruger Bisley frame.[2]

The .500 Linebaugh is a proprietary cartridge and thus has not been adopted by mainline firearms manufacturers. Currently no firearms manufacturers make revolvers specifically for this cartridge. Instead, gunsmiths such as John Linebaugh of Linebaugh Custom Six guns and Hamilton Bowen of Bowen Classic Arms convert pre-existing single action revolvers such as the Ruger Blackhawk and Bisley to fire the cartridge. Hamilton Bowen has been known to have converted the Ruger Redhawk double action revolver for use with this cartridge. 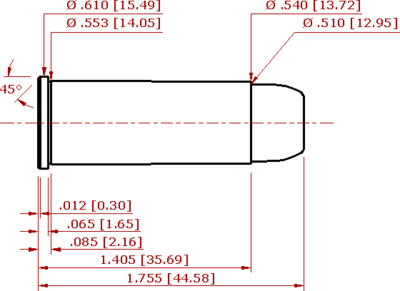 Due to the proprietary status of the cartridge neither the CIP nor SAAMI have published official specifications for the cartridge. As is the case, there can be some variations from gunsmith the gunsmith. No pressure standard has been published for the cartridge but according to Linebaugh pressures levels between 30,000 psi (2,100 bar) and 35,000 psi (2,400 bar) are considered safe in the converted revolvers.

The .500 Linebaugh was designed as a hunting cartridge but would also make excellent backup firearm in areas where large bears may be encountered; particularly in Alaska. It was designed to fire a 440 gr (29 g) bullet at 1,300 ft/s (400 m/s).[3] This particular loading generates 1,650 ft·lbf (2,240 J) of energy making this one of the most powerful handgun cartridges put into production. In terms of energy, this is comparable to the .454 Casull cartridge. However, the .500 Linebaugh provides a larger diameter, heavier bullet with a greater sectional density than the .454 Casull. As a hunting cartridge it is capable of taking any North American game animals and most African game species.[1]