The .38 Super retains the original dimensions of the .38 ACP case . The cartridge was originally designed to headspace on the semi-rim, which worked in the Colt M1900 due to the design of the feed ramp. When the .38 Auto became the .38 Super, in the 1911A1, the feed ramp could no longer be used as rim support. As a result of this, observed accuracy of the .38 Super suffered, post-WWII, until Irv Stone of Bar-Sto barrels re-designed the chamber to allow headspacing on the case mouth. Since then, all new .38 Super pistols headspace on the case mouth, as with other cartridges in this class. Because the semi-rimmed case can cause some feeding trouble in magazines, especially double stack magazines, new variants with a much smaller rim (typically only .003" per side), like .38 Supercomp, .38 Super Lapua and .38 TJ (.38 Todd Jarrett) have been developed.

In 1974 the industry added the +P headstamp to the .38 Super to further distinguish it from the lower-pressure .38 ACP. Most current ammunition manufacturers label ammunition for the Super as .38 Super +P.

The cartridge was designed for use in the M1911 pistol and was capable of penetrating the body armor and automobile bodies of the time.[4] When the .357 Magnum was introduced in 1934, this advantage of the .38 Super was no-longer enough to lure police departments and officers from the traditional revolver.

Since the .38 Super is dimensionally the same as the .38 ACP (not to be confused with the .380 Auto cartridge), an unsafe condition can be caused by firing .38 Super cartridges in a firearm designed for the much lower pressure .38 ACP. The weakness, in the Colt M1900, M1902 and others derived from that design, comes from the assembly wedge at the front of the slide. If the wedge comes out, or the slide cracks at the wedge, the slide can come off the rear of the frame when fired. The 1911 and 1911A1, having a slide that is solid on front, cannot come off the frame that way. 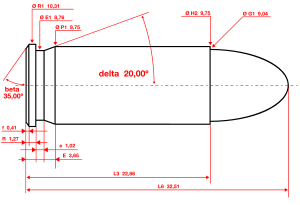 The C.I.P. and SAAMI specified .38 Super (+P) has a semi-rimmed cartridge case.

In recent years nearly rimless cases became available that transformed the .38 Super into being almost truly rimless. In practice, many people call them "rimless" although that is something of a misnomer, because a true rimless case has the rim diameter the same as the case wall diameter just forward of the extractor groove. A common example of the new cases being .38 Supercomp, which has a semi-rim extending only .003-.004" per side, compared with standard .38 Super which has .007-.009" per side. A reason for the development of the new cases was that the semi-rimmed .38 Super case did not always feed reliably from double column box magazines used in several semi-automatic pistols that are popular in practical shooting sports such as USPSA or IPSC. The nearly rimless case improves feeding reliability in these pistols. As the name suggests, the semi-rim was mostly eliminated. The new rim diameter is close to the case wall diameter. On measured samples of cases, the rim (R1) diameter was no more than 0.18 mm (0.007 in) wider than the case wall (P1) diameter (in typical semi-rimmed cases the rim (R1) diameter is roughly 0.51 mm (.020 in) wider than the case wall (P1) diameter). The rimless cases are intended to headspace on the case mouth.[7]

Because of its larger case volume, which allows for more smokeless powder and results in higher muzzle velocities at approximately similar pressure levels,[6] the .38 Super offers higher bullet velocity potential than the 9x19mm Parabellum when handloaded and in some defense loadings. The 9x19mm Parabellum is however approved for higher pressure +P loadings by both SAAMI and C.I.P., which compensates for much of the case volume difference in factory-loaded ammunition. The .38 Super is generally regarded as a well-balanced cartridge with a flat trajectory, good accuracy and relatively high 'muzzle energy'; most loadings have a higher 'muzzle energy' than many factory-loaded .45 ACP loadings.[8]

The .38 Super has made a comeback in IPSC and USPSA sports shooting raceguns, particularly when equipped with a compensator, because it exceeds the power factor threshold to be considered a "Major" charge, while having much more manageable recoil than .45 ACP. Part of the felt recoil reduction is due to the use of lighter-weight bullets. The major cause of reduced felt recoil is a compensator, or muzzle brake. The "comp" works by diverting gases at the muzzle. The greater the gas volume, or the higher the pressure, the greater the effectiveness of a comp. As the Super runs at a higher pressure than, say, the .45, a comp will have more recoil-reduction effect.

The comeback began in the early 1980s, when Robbie Leatham and Brian Enos began experimenting with, and competing with, .38 Super pistols in IPSC. At the time, single-stack 1911s in .45 ACP were dominant. Their .38 Super pistols held 1-2 more rounds simply due to the smaller case diameter. However, the biggest advantage was the muzzle brake, allowing for faster follow-up shots, and thus faster stages and subsequent higher scores. Competitors still using .45 ACP pistols attempted to keep pace, both by adding compensators and by reducing bullet weight, quickly reaching the limit at 152-155 grains. The Super could be loaded to Major with a bullet as light as 115 grains.

Use of compensators in competition is limited to Open Division in USPSA/IPSC. The other Divisions there do not permit their use, and IDPA does not permit them at all. Lacking a comp, a .38 Super, running at Major, has felt recoil much like that of a .45 ACP, and more than that of a 9mm.

Apart from its popularity in the shooting sports, the .38 Super +P is one of the most popular pistol cartridges in Latin America due to local restrictions on civilian ownership of firearms chambered for the military cartridges, such as the .45 ACP.[8] For this reason, American police departments in the southwestern United States often consider .38 Super shell casings found at homicide scenes as a sign that the firearm was of Latin American origin.

The .38 Super round received further publicity through the single-action "Colt Combat Commander" and lightweight aluminum alloy frame "Colt Commander". When Colt switched the inventory's supply of the model from the Series-70s to the Series-80s, the model fell into lesser demand.

The .38 Super +P cartridge ballistics have been improved over the years by the use of modern propellants. Ammunition is now available with velocities exceeding 1,400 ft/s (430 m/s). This is impressive from a semi-automatic pistol and is comparable to the .357 SIG.[11] The .38 Super +P is very popular in Australia and Latin America in regards to competition shooting and is also finding its way back into the role of a CCW caliber. Ammunition can now be found in the hollowpoint style bullet with excellent ballistics. A standard single stack magazine 1911 style semi-automatic pistol holds nine to eleven rounds with one in the chamber. Double stack magazine pistols in this cartridge holds fifteen to eighteen rounds with one in the chamber.