The .375 Holland & Holland Magnum (9.5×72mmB) is a medium-bore rifle cartridge. The .375 H&H was only the second cartridge ever to feature a belt, now common among magnum rounds.[1] On these new rimless cartridges the belt replaced the rim in ensuring the correct headspace, which otherwise might be unreliable, given the narrow shoulder of the cartridge case.[2] The British company Holland & Holland introduced the cartridge in 1912 as the .375 Belted Rimless Nitro-Express. It initially used cordite propellant which was made in long strands – hence the tapered shape of this cartridge, which also ensured smooth chambering and extraction from a rifle's breech.[3]

The .375 H&H often is cited as one of the most useful all-round rifle cartridges, especially in shooting large and dangerous game.[4] With relatively light bullets in the region of 235 to 270 grains (15 to 17 g), it is a flat-shooting, fairly long-range cartridge ideal for use on light to medium game. With heavy bullets of 300 grains (19 g) and greater, it has the punch necessary for large, thick-skinned dangerous game. In many regions with thick-skinned dangerous game animals, the .375 H&H is seen as the minimum acceptable caliber, and in many places (primarily in Africa) it is now the legal minimum for hunting such game. African game guides, professional hunters, and dangerous game cullers have repeatedly voted the .375 H&H as their clear preference for an all-round caliber if they could have only one rifle. Alaskan game guides have expressed a similar preference for brown bear and polar bear country.[3]

Unlike what is seen in most calibers, many .375 H&H rifles also achieve nearly the same point of impact over a wide range of bullet weights at all commonly used distances, further simplifying a professional hunter's choice in selecting different grain bullets based upon the game hunted by requiring fewer scope or sight adjustments, which further serves to popularize the .375 H&H Magnum among professional hunters.[5][6]

The .375 H&H Magnum is the result of competition between British rifle manufacturers to develop new cartridges to take advantage of the new smokeless powders. The 9.5×57mm Mannlicher–Schönauer cartridge had a major influence on British rifle manufacturers[1] and was soon adopted by Westley Richards and Eley as the .375 Rimless Nitro Express 2.25". In an effort to compete, Holland & Holland introduced the .400/375 Belted Nitro Express. The .400/375 H&H (also known as the .375 Velopex) as it is sometimes known was the first cartridge manufactured to feature a belt. The addition of a belt to a rimless cartridge design provided the advantage of allowing for correct headspacing of highly tapered cartridges (an advantage of flanged cartridges) and smooth feeding through magazine rifles (the advantage of rimless cartridges).[7]

The introduction of the 9.3×62mm Mauser cartridge in 1905 had a profound and lasting influence on hunters in Africa. Compared to the British double rifles, the Mauser was a far less expensive rifle to manufacture and therefore cheaper to acquire. The double rifles gained little from industrialization whereas the Mauser rifles had gained from mass production due to contracts to produce military rifles for many countries. The result was cheap magazine rifles capable of firing one of the very best candidates for the all round hunting cartridge in Africa. The influence of Mauser's 98 action should not be understated; British gunmakers such as Rigby were purchasing the Mauser 98 actions for use in their own rifles with their own cartridges.[8] The popularity of the 9.3×62mm Mauser was such that everyone from the German farmers in Africa to the white hunters from Europe discarded their previous doubles and less powerful magazine rifles and took to the 9.3×62mm. The 9.3×62mm demonstrated that it was adequate for everything from the elephant to the dik-dik and had acquired a reputation to match.[7]

This trend did not go unnoticed by British rifle manufacturers. Between 1909 and 1911 Holland & Holland, Jeffrey, Rigby and Westley Richards introduced their own competing designs: .375 H&H Magnum, .404 Jeffery, .416 Rigby and the .425 Westley Richards in an effort to stem the tide of the 9.3×62mm. Furthermore, the influence of the high-velocity craze begun by the Canadian .280 Ross rifle had a marked effect on the Holland & Holland's final design which also drew from their experience with the .400/.375 H&H cartridge.[7]

Holland & Holland decided that the rifle had to fire a bullet with an adequate sectional density as the 286 gr (18.5 g) bullet of the 9.3×62mm Mauser cartridge which had demonstrated that it had the required penetration on thick skinned dangerous game. Secondly, the cartridge would require a high velocity so as to provide this penetration at extended ranges. The high velocity of the cartridge would have the added advantage of serving as a marketing tool. Thirdly, the cartridge must function reliably through a magazine rifle in tropical conditions and this required a tapered case working at lower pressures. Holland & Holland had determined that to provide adequate penetration a bullet with the sectional density similar to the 9.3×62mm required impact velocities of about 2,150 ft/s (660 m/s). Drawing from anecdotal evidence of hunters it was also determined that high velocities provided impressive kills on game. Another added advantage of the high velocities was that a range misjudgment would be mitigated by the flatter trajectory of a HV projectile.[7]

Original cordite loads were as follows:

The new cartridge was a proprietary design unlike the 9.3×62mm and was considerably longer than its German counterpart. While many .375 H&H rifles were built on the longer magnum Mauser actions, these actions were considerably more expensive and rarer than the standard actions. Standard actions could be used but required modifications to allow for the feeding and cycling of the .375 H&H Magnum cartridge. So while the .375 H&H provided considerable advantages over the 9.3×62mm the significantly greater cost of the H&H rifles presented a roadblock to the adoption of the .375 H&H over the 9.3×62mm cartridge and remained for a time a less attractive option.[7]

At the end of World War I Holland & Holland released the cartridge to the public for general trade. Also, new markets opened in America as more hunters sought to hunt in Africa. The .375 H&H was seen by many as the best medium bore cartridge available and which could be easily put to use hunting dangerous game in North America. Winchester was the first US gun maker to produce rifles chambered for the cartridge and did so beginning in 1925.[7]

The end of World War II saw many gun makers turning to the civilian shooting market when war time contracts began running out. FN, Mauser, Remington and Winchester began turning out quality bolt-action rifles and with increasing number of sportsmen taking to Africa saw the .375 H&H increasing in popularity. A further boost in popularity came when African colonies enacting legislation stipulating that the 9.3 mm (0.37 in) or the .375 in (9.5 mm) be the minimum bullet diameter for dangerous game. The legislating away of sub minimum cartridges forced the users of these cartridges to pick up a cartridge which qualified for the shooting of these game species and the logical choice was to move up to the .375 H&H Magnum.[7]

The .375 H&H Magnum case design was conceived to use cordite; a stick type propellant used widely in the United Kingdom. The tapering cartridge body design and the small shallow shoulder are typical aspects of cartridges optimized for the use of this propellant.[10] An advantage of such a case design is that it will feed and extract smoothly thus contributing to the cartridge's reliability in the field.

Unlike previous cartridges, the .375 H&H operates at relatively higher pressures and was designed from the outset for use with smokeless powders that can generate higher pressures and thus higher velocities. However, when the cartridge was designed pressure levels were held to 47,000 psi (3,200 bar) as cordite was sensitive to temperature and could cause dangerously high pressures in the hot tropical climates of Africa and India. However, modern smokeless powders are not as sensitive to ambient temperatures as cordite and therefore both the C.I.P. and SAAMI provide far higher allowable pressures than the original loading of the cartridge allowed. 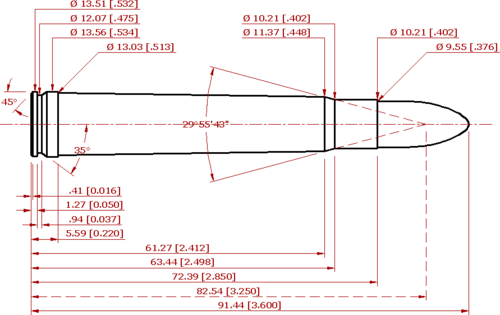 The .375 H&H Magnum is one of the most versatile cartridges and is referred to by Jack O’Connor as the "Queen of the Medium Bores".[13] The cartridge is very popular in Africa where it is considered one of the best all-round rifle cartridges. It is capable of taking any big species including all the Big Five game animals.[14] The big game hunter, John "Pondoro" Taylor, held the .375 H&H Magnum in such high esteem that he dedicated a chapter in the book African Rifles and Cartridges.

Ammunition loaded with the 300 gr (19 g) or heavier bullet the .375 H&H is adequate for heavy thick skinned dangerous game such as elephant and rhinoceros in most conditions. Today, due to the pace at which hunting is conducted and the requirement of success within certain time constraints, the .375 H&H Magnum is considered under powered for class 4 game like elephant, rhinoceros and buffalo as the only shooting situation that might present itself might be an adverse one. However, there is little doubt that it has been successfully used to take these heavy dangerous game species. There is some speculation that the .375 H&H Magnum has been used to take more Big Five game than any other cartridge.[citation needed] Even today, many professional hunters, outfitters and wildlife management personnel in Africa continue to rely on the .375 H&H Magnum to carry out their duties throughout the continent.

Bullets weighing 250–270 gr (16–17 g) are perfect for the largest cats such as the lion or tiger and other dangerous class 3 game. While these felines do not require extremely powerful cartridges, (a .300 Winchester Magnum can be considered a minimum for these cats), local requirements or regulations may require a larger cartridge than the .375 H&H Magnum. This range of bullets also is a great choice for most plains game species in Africa, elk, red deer and moose (called elk in Europe) in North America and Europe.

There are a great number of rifles (and even a few handguns, such as adapted Howdah pistols) chambered for the .375 H&H. Many types of actions are used, including single-shots, double-rifles, and bolt actions. When hunting dangerous game, a double-rifle or a controlled-feed bolt-action rifle is most commonly recommended, as a quick follow-up shot may be necessary, and reliability of the firearm becomes of paramount importance.

The .375 H&H Magnum's long tapering body and shallow shoulders are generally believed not to promote long case life due to case head separation above the belt. The case design does not promote the optimal use of the cartridge size to gain performance. Modern cartridges have very little taper so as to benefit from a larger powder capacity. There have been a few attempts to improve the performance of the cartridge.

As a parent cartridge

The distinctive belted case of this cartridge was patented in Britain on 31 March 1891 by G. Roth of Austria. The first commercial use of the patent was in 1907 for the .375 Holland-Schoenauer cartridge for a Mannlicher–Schoenauer bolt-action rifle marketed by Holland & Holland. The .375 H&H used an improved belted case shared with the .275 H&H Magnum when they were introduced together in August, 1912.[16] This second belted case design was later used with the .300 H&H Magnum, and has been modified as the basis for "Magnum" cartridges developed by other arms manufacturers.

Cartridges based on the full length .375 H&H Magnum case

Standard length cartridges based on the .375 H&H Magnum case

Short action cartridges based on the .375 H&H Magnum case