The .357 SIG pistol cartridge is the product of Swiss-German firearms manufacturer SIG Sauer, in cooperation with the American ammunition manufacturer Federal Cartridge. While it is based on a .40 S&W case necked down to accept 0.355-inch (9.0 mm) bullets, the .357 SIG brass is slightly longer (0.009-inch (0.23 mm) to 0.020-inch (0.51 mm)). The cartridge is used by a number of law enforcement agencies and has a good reputation for both accuracy and stopping power.[2]

Developed in 1994, the new cartridge was named "357" to highlight its purpose: to duplicate the performance of 125-grain (8.1 g) .357 Magnum loads fired from 4-inch (100 mm) barreled revolvers, in a cartridge designed to be used in a semi-automatic pistol with greater ammunition capacity than a revolver. Performance is similar to the 9x23mm Winchester. 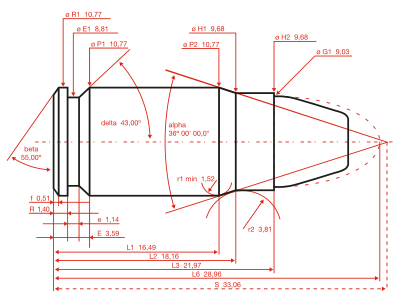 Several sources have published contradicting information regarding .357 SIG headspacing.[3] This is due to originally designed as .357 (9.02mm) round but has been rapidly adapted to .355 (9mm) bullet.

Most .40 S&W pistols can be converted to .357 SIG by replacing the barrel, but sometimes the recoil spring must be changed as well. Pistols with especially strong recoil springs can accept either cartridge with a barrel change. Magazines will freely interchange between the two cartridges in most pistols. .357 SIG barrel kits have allowed this cartridge to gain in popularity among handgun owners. However, the .357 SIG is loaded to higher pressures than the .40 S&W (the C.I.P. and the SAAMI pressure limits for .40 S&W are 225 MPa and 35,000 psi), and may not be suitable for use in all .40 S&W-chambered pistols due to the increase in bolt thrust.

Because of its relatively high velocity[7] for a handgun round, the .357 SIG has an unusually flat trajectory, extending the effective range. However, it does not quite reach the performance of the .357 Magnum with bullets heavier than 125 grains (8.1 g). Offsetting this general slight disadvantage in performance is that semi-automatic pistols tend to carry considerably more ammunition than revolvers.

The Virginia State Police has reported that attacking dogs have been stopped dead in their tracks by a single shot, whereas the former 147 grain 9 mm duty rounds would require multiple shots to incapacitate the animals.[8] Proponents of the hydrostatic shock theory contend that the energy available in the .357 SIG is sufficient for imparting hydrostatic shock with well-designed bullets.[9][10][11] Users have commented, "We're really impressed with the stopping power of the .357 SIG round."[2]

The bottleneck shape of the .357 SIG cartridge makes feeding problems almost non-existent.[12] This is because the bullet is channeled through the larger chamber before being seated entirely as the slide goes into full battery. Flat point bullets are seldom used with other autoloader platforms because of feeding problems; however, such bullets are commonly seen in the .357 SIG chambering and are quite reliable, as are hollow-point bullets.

The "Accurate Powder" reloading manual claims that it is "without a doubt the most ballistically consistent handgun cartridge we have ever worked with."[5]

With a simplistic approach to physics, recoil being directly proportional to "muzzle velocity x bullet mass" (due to conservation of momentum), the recoil of the .357 SIG is equal to or slightly less than that of the .40 S&W, and less than that of the full-power 10 mm Auto loads or the original .357 Magnum,[15] Handgun Recoil table as well as Federal and.[16] This simple approach to recoil is incomplete since the properties of the bullet alone do not determine the felt recoil, but also the rocket-like blast of propellant gases coming out of the barrel, after the bullet leaves the muzzle.[17] A more accurate view on recoil is that it is proportional to the mass of all ejecta x velocity of ejecta.[18] Even so, recoil calculated in this manner is only the starting point in a comparison with the .357 Magnum cartridge, since the latter is used in a revolver, in which the recoil energy is due to the Bullet and propellant less ejecta escaping between the cylinder and breech, while the .357 SIG cartridge in a semi-automatic pistol using recoil operation, a significant portion of the recoil energy is diverted to cycle the action, effectively prolonging the recoil phase. Of course, other considerations affect the user's perceived recoil, such as the weight of the weapon, front to back balance, moving mass, height difference between the shooter's grip parallel to the barrel, and grip.

Like the 10 mm Auto, the .357 SIG can be down-loaded to reduce recoil to the point where recoil is similar to that of a 9x19mm Parabellum. However, since the .357 SIG uses bullets that are generally the same as those used in the 9 mm Para,[20] downloading it to this point would defeat the purpose of having the SIG cartridge in the first place, as the .357 SIG casing was designed to handle up to 160gr. bullets whereas 9mm max out at 147gr. and to download for recoil and ballistics to be identical to the less-powerful 9 mm cartridge would basically defeat the purpose of using .357 sig.

Because the .357 SIG fires at relatively high pressures, muzzle flash and noise can be significant with standard loads, even with longer barrels. Utilizing loads with specialized powders and various bullet weights might reduce flash.

The SIG Sauer P229 in .357 SIG has been adopted for use by agents and officers of the following national and state organizations: