The .300 Winchester is extremely versatile and has been adopted by many shooting disciplines. The cartridge has found use by hunters, target shooters, military units, and law enforcement departments. Hunters found that the cartridge was an effective all round hunting cartridge. The .300 Win Mag remains the most popular .30 caliber magnum with American hunters, despite being surpassed in performance by the more powerful .300 Weatherby Magnum and the newer .300 Remington Ultra Magnum.[3] It is a popular selection for hunting moose, elk, and bighorn sheep as it can deliver better long range performance with better bullet weight than most other .30 caliber cartridges. Military and law enforcement departments adopted the cartridge for long range sniping and marksmanship. As a testament to its accuracy, since its introduction it has gone on to win several 1,000-yard (910 m) competitions.[4]

Prior to the design of the .300 Winchester Magnum there were several cartridges that provided what could be best described as a magnum level of power. The heritage of .30 caliber (7.62 mm) magnums can be traced back to the .30 Newton in 1913 and to the .300 H&H Magnum in 1925. Beginning with the .270 Weatherby Magnum in 1943, Roy Weatherby introduced a line of cartridges based on a standard length (2.5 in [64 mm]) magnum case. This was accomplished by taking the .30 Super Belted Rimless H&H case and having it blown out (reducing the taper) and shortened so that it could be cycled through a standard length bolt action rifle. Then in 1944 he designed the .300 Weatherby Magnum, which essentially was an improved version of the .30 Super Belted Rimless H&H, a close variant of the .300 H&H Magnum.

The .300 Winchester uses the same case head design of the .375 H&H Magnum, its parent cartridge. The taper of the cartridge was reduced to provide the cartridge with more volume so as to increase its potential powder capacity. The lengthening of the case and the move of the shoulder forward over the .338 Winchester Magnum allowed for the reaming of the .308 Norma Magnum or .30-338 Winchester chamber to dimensions of the .300 Winchester Magnum. The down side was a neck which was shorter than the caliber of the bullet it fired, which meant that the bullet had to be seated more deeply in the case. 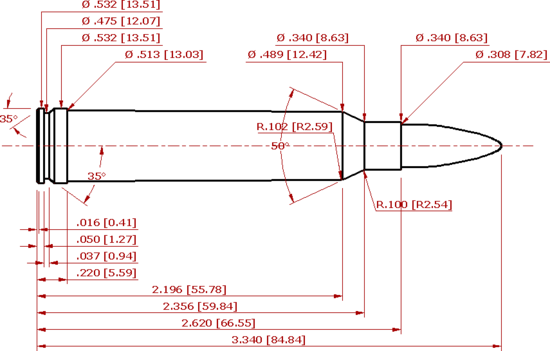 Both SAAMI and CIP have provided specifications for the .300 Winchester Magnum cartridge. No divergence between CIP and SAAMI dimensional values exist for this cartridge. SAAMI recommends a bore diameter of 0.300 inches (7.6 mm) and a groove diameter of 0.308 inches (7.8 mm). SAAMI recommended a six-groove barrel with each groove being 0.110 inches (2.8 mm) wide. Recommended twist ratio is 1:10. 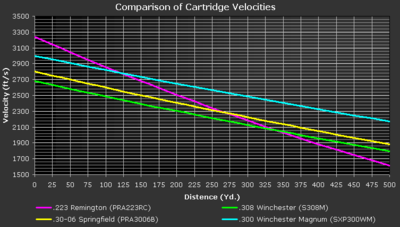 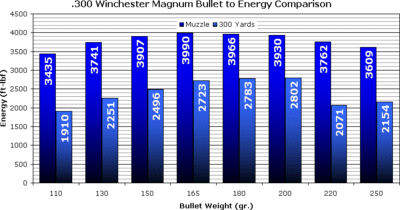 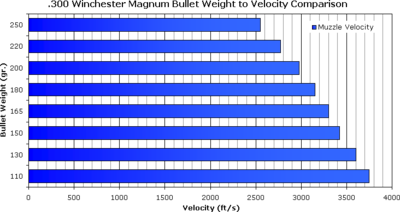 The .30 caliber is the most popular caliber in the United States. So it is not surprising that the widest range of bullets available is in the .30 caliber. The most useful bullet weights for the .300 Winchester Magnum are those weighing between 150–200 grains (9.7–13.0 g). However, bullets weighing between 110–250 gr (7.1–16.2 g) are available to the reloader for the .300 Winchester Magnum.

Compared with the 30-06 Springfield the .300 Winchester Magnum provides about 300 ft/s (91 m/s). This translates to about 20% greater energy advantage over the 30-06 Springfield cartridge. Due to the short neck, heavier bullets particularly those weighing greater than 200 grains (13 g) and mono-metal bullets such as the Barnes X bullets will need to be seated more deeply into the cartridge. As the bullet will take up volume which could have been taken by the propellant velocity advantages diminish as the weight of the bullet increases.

The .300 Winchester Magnum is known for its accuracy and has been used for 1,000-yard (910 m) and 1,000-metre (1,100 yd) competitions. While in hunting situations such accuracy is unnecessary, such accuracy does aid in the extending the range of the cartridge. Taken together with its performance it remains one of the most useful and popular cartridges today.

The down side to this performance is recoil. The amount of recoil the cartridge generates is a step up from the non-magnum .30 caliber (7.62 mm) cartridges. Its recoil is about 30% greater than that of the .30-06 Springfield,[7] which is known as a 'stout' cartridge. This would put the .300 Winchester Magnum at the upper limit of what most shooters can shoot comfortably for extended shooting sessions. As a rough comparison, the recoil of the .300 Winchester Magnum is roughly comparable to a 12 gauge shotgun shooting 1 oz. slugs. This greater recoil can make the .300 Winchester Magnum, despite its accuracy advantages, a harder cartridge to shoot actually accurately, when compared to non-magnum 30 caliber cartridges such as the .30-06 Springfield or the .308 Winchester. On the other hand, recoil is subjective (some are more sensitive to it than others) and one can get used to it with practice. Also, many rifles available today now have effective recoil attenuating features built into them, such as muzzle compensators and energy absorbing stocks and butt-pads, that can significantly lessen recoil as it is felt by the shooter.

The .300 Winchester Magnum has more than enough power to hunt all species of ungulate. It is particularly useful when hunting the members of the ungulate family such as elk and moose and is a popular cartridge among hunters for these big game species. Elk can weigh as much as 1,000 pounds (450 kg) and moose 1,400 pounds (640 kg). Bullet weights of 165–200 grains (10.7–13.0 g) are the preferred choices for these game species. Controlled expansion bullets such as the Nosler Partition or Barnes X are preferred rather than more lightly constructed bullets for these larger species of ungulate. Bullets weighting 150–165 gr (9.7–10.7 g) are adequate for smaller deer such as the mule deer and white tail deer.

The .300 Winchester Magnum is an excellent cartridge for the hunting of sheep, as long range shooting circumstances can present themselves. With its velocity, low bullet drop and ability to retain usable energy at an extended range, the .300 Winchester Magnum comes into its element when hunting sheep. Be it for chamois in the Alps, bighorn in the Rockies, argali in the Pamirs or mouflon in the Caucasus the cartridge is an excellent choice for the sheep hunter.[8]

The cartridge is one of the more favored cartridges for African plains game. Its ability to shoot flat and carry its energy efficiently with bullets of good sectional density and ballistic coefficients provides the cartridge the long range performance necessary to take these game species at extended ranges. The .300 Winchester Magnum can be used to hunt everything from the dik-dik to the giant eland. It is an excellent cartridge choice for all plains game under 1,500 pounds (680 kg).

The .300 Win Mag is a cartridge for big game hunting and long-range shooting. It sees use in long-range benchrest shooting competitions and has been adopted by law enforcement marksmen and by a few specific branches of the U.S. Military for use by snipers. Maximum effective range is generally accepted to be 1,210 yards (1,110 m) with ammunition incorporating low-drag projectiles. Sub 1 minute-of-angle (MOA) accuracy out to 1,000 yards (910 m) is not unusual in precision-built rifles firing match-grade ammunition.

Recoil from the .300 Win Mag is higher than the well-known .30-06 Springfield, which owes its popularity in part to the fact that it represents the upper limit of recoil that the typical shooter can manage without discomfort. Remington has made low-recoil rounds called "Managed-Recoil" available for the .300 Win Mag, which recoil less and provide performance similar to the .30-06 Springfield.

The short neck was thought to hinder accuracy because it would prevent the alignment of cartridge to the bore but this is rarely an issue either today or when the cartridge was designed. The fact that the cartridge has gone to win many 1,000-yard (910 m) matches puts this criticism to rest.[4]

However, the short neck with the shoulder moved forward does cause some real problems. Since the .300 Winchester Magnum is designed to work out of a standard length action, heavier bullets will need to be seated deeper into the case. Since many heavier .30 caliber (7.62 mm) bullets have a long taper, and these bullets will be required to be seated deeper into the case, the neck will end up being positioned in the ogive rather than on the shank of the bullet due to the fact that Winchester had moved the shoulder forward.[4] This prevents the case from having a good grip on the bullet. Under recoil such loosely held bullets in the magazine will be pushed back into the case. Also, if using a highly compressed load the cartridge might “grow” in length and may not be able to fit into the magazine. For these reasons bullets weighing over 200 grains (13 g) are not recommended.[16] Norma goes further recommending that bullets heavier than 180 grains (12 g) not be used with the cartridge.[15]