The .260 Remington (also known as 6.5-08 A-Square) cartridge was introduced by Remington in 1997. Many wildcat cartridges based on the .308 Winchester case had existed for years before Remington standardized this round. Although loaded to higher pressures, the ballistics of this cartridge are basically similar to the 6.5×55mm when bullet weights do not exceed 140 grains. When loaded with heavier bullets, the 6.5×55mm is capable of greater velocity.[1] Due to its shorter overall length the .260 Remington can be chambered in a shorter length bolt action than the 6.5mm Swedish.

Because 6.5 mm (.264") bullets have relatively high ballistic coefficients, the .260 Remington has seen success in rifle competition. It is capable of duplicating the trajectory of the .300 Winchester Magnum while generating significantly lower recoil.[citation needed] Also, converting a rifle chambered for the .308 Winchester (or any of its offspring, such as the .243 Winchester, 7mm-08 Remington or .338 Federal) to .260 Remington generally requires little more than a simple barrel change.

Remington has had a track record of adopting successful wildcat cartridges into the Remington fold by offering rifles and ammunition and at times attaching their name to the cartridge.[citation needed] Like many cartridges such as the .22–250 Remington, .25-06 Remington and the 7 mm-08 Remington, the .260 Remington started its life as a wildcat cartridge called the 6.5-08 and was eventually released as a commercial cartridge by Remington. However, it was not Remington who first attempted to standardize the cartridge. LTC Arthur Alphin and his company A-Square LLC submitted the first proposal and drawings to SAAMI for the standardization of the cartridge. Remington was to file similar papers with SAAMI to do the same a few months later. When the dust settled it was found that the 6.5-08 would be called the .260 Remington instead of 6.5–08 A-Square.

The 6.5 -08 cartridge was created simply by necking down the .308 Winchester or the 7 mm-08 Remington or necking up the .243 Winchester cartridge to create the case. Since all these cartridges had the same basic dimensions right up to the shoulder, case forming was a relatively simple task for anyone with an understanding of reloading and case forming. As the parent cartridges were readily available for low cost, the 6.5 -08 was often an economical alternative to cartridges such as the 6.5x55 Swedish Mauser. What the 6.5-08 provided over the .243 Winchester, .308 Winchester and to a lesser degree the 7 mm-08 Remington was bullets with excellent ballistic coefficients and sectional densities relative to their weights.

The .260 Remington uses the .308 Winchester case as its parent cartridge which is simply necked down to accept a .264 caliber bullet with no further changes made to the case. As the cartridge follows a modern design, it has little taper which allowed its parent cartridge to feed reliably through auto-loading rifles such as the M-14, FN-FAL and the H&K G3. The .260 Remington has a case capacity of about 3.47 ml (53.5 grains) H2O.

Both SAAMI and C.I.P. have provided design specifications for the .260 Remington cartridge. While there are minor dimensional differences between dimensions provided by both organizations, these dimensional differences mostly fall within the tolerances allowed by the other organization, though C.I.P. lists the .260 as a Delta L problem cartridge. SAAMI dimensions for the cartridge were issued on January 29, 1999 when the Remington's submission was accepted. 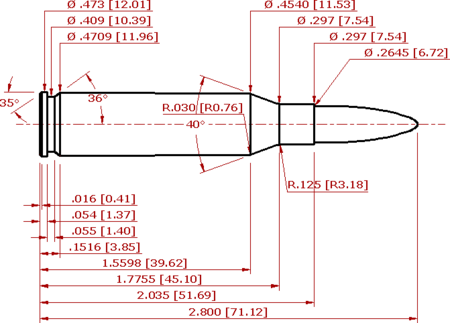 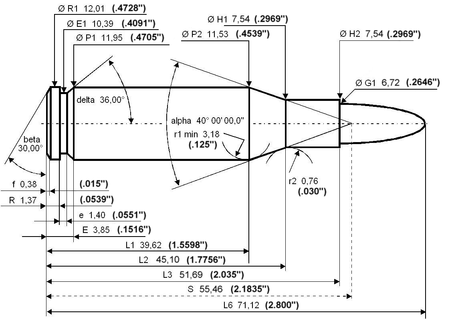 According to the official C.I.P. (Commission Internationale Permanente pour l'Epreuve des Armes à Feu Portatives) guidelines the .260 Remington case can handle up to 415 MPa (60,190 psi) piezo pressure. In C.I.P. regulated countries every rifle cartridge combo has to be proofed at 125% of this maximum C.I.P. pressure to certify for sale to consumers.

While it is possible to load the 160 gr (10 g) bullet which is popular in Northern Europe, for the .260 Remington, due to the comparatively short overall length of the cartridge, the bullet will need to be seated deep into the body of the cartridge displacing space which could be taken up by the propellant. For this reason, bullets weighing over 140 gr (9.1 g) are not generally recommended for loading with this cartridge.

Due in large part to its parentage, the .260 Remington has been adopted into tactical and target shooting rifle platforms. Any rifle which is chambered for the 7.62x51 NATO or the .308 Winchester can be converted with only the addition of an appropriate barrel to the .260 Remington. Companies such as Armalite (AR-10), DPMS Panther Arms, Tubbs and KMW are among several companies which currently manufacture tactical rifles for use with this cartridge.[6] As the 6.5 mm (.264 caliber) bullets are known for their excellent ballistic coefficients, it is little wonder that they have been adopted for target shooting especially by the Scandinavian nations. Tubbs manufactures rifles for competition one of which went on to win the NRA HP Championship in 2010.[2]

The .260 Remington has been found effective against large deer species such as elk and moose, but some hunters, particularly Canadian professional hunters who hunt large moose and elk, consider it slightly underpowered for these species and best used for smaller deer species such as white-tail and mule deer. However, the 6.5×55mm, which is usually loaded to a lower power level than the .260 Remington, is commonly used in Norway and Sweden with bullets weighing at least 9 g (140 gr) to kill Eurasian elk (a term which is applied to moose in these countries). The .260 Remington would make an excellent cartridge for hunting smaller African antelopes weighting 440 lb (200 kg) or less.

Loaded with lighter bullets, the .260 Remington can be used as an effective varmint or a small predator hunting cartridge for use against such species as marmots, woodchucks, bobcats and coyotes. Bullets chosen for these species should be designed to open rapidly unless harvesting of the pelt is the objective. FMJ or other non-expanding bullets can be used if the latter is the case.

Browning at one time chambered the cartridge in their copy of the Winchester 1885 Low Wall rifle which Browning markets as the B78 and also their A-Bolt Micro Hunter rifle. Browning has since discontinued the .260 Remington chambering in these models.

Since the acceptance of the submission by Remington Arms for the standardization of the 6.5-08 cartridge by SAAMI, A-Square has dropped the cartridge from their line of cartridges chambered for their rifles and no longer offers ammunition in this cartridge. Instead A-Square LLC has gone on to produce rifles and ammunition for the 6.5-06 A-Square cartridge which is based on the .30-06 Springfield necked down to .264 caliber (6.5 mm). This cartridge provides over a 200 ft/s (61 m/s) velocity advantage over the .260 Remington.