Military Wiki
Register
Don't have an account?
Sign In
Advertisement
in: Articles incorporating text from Wikipedia, History of Cambodia, History of Vietnam,
and 6 more

The Đại Việt–Khmer Wars were a series of wars fought between the kingdom of Đại Việt and the Khmer Empire between 1123 and 1150.

At the time Đại Việt was in a vulnerable position due to internal conflict and a series of wars with their neighbors. In 1127, the 12-years-old Crown Prince Lý Dương Hoán became new ruler of Đại Việt.[2] Suryavarman II demanded Đại Việt to pay tribute for the Khmer Empire, but it wasn't happened. After the Vietnamese refused to pay tribute the Khmers, Suryavarman II decided to expand his territory northward into Vietnamese territory.[1] 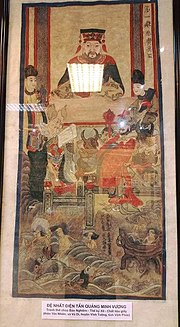 The first attack was in 1128 when King Suryavarman II led 20,000 soldiers from Savannakhet to Nghệ An but were routed in battle. The following year Suryavarman continued skirmishes on land and sent 700 ships to bombard the coastal areas of Đại Việt. The warfare escalated in 1132 when Khmer Empire and Champa jointly invaded Đại Việt, briefly seizing Nghệ An. During that time, the minister Lê Bá Ngọc dominated the Viet court with his adopted son Đỗ Anh Vũ. In 1136, Đỗ Anh Vũ led an expedition with thirty thousand troops into Khmer territories, but his army later retreated after subdued highland tribes in Xiangkhoang.[1] By 1136, King Jaya Indravarman III of Champa made peace with the Vietnamese, which led to the Khmer–Cham War. In 1138, Lý Thần Tông died aged 22 from a disease and was succeeded by his two years old son Lý Anh Tông. Suryavarman II led several more attacks on Dai Viet until his death in 1150.[3]

Inscriptional evidence suggests that Suryavarman II died between 1145 AD and 1150 AD, possibly during a military campaign against Champa. He was succeeded by Dharanindravarman II, a cousin, son of the brother of the king’s mother. A period of weak rule and feuding began.

In Đại Việt, the victories famed Đỗ Anh Vũ and weakened the royal throne. He became regent of the court of Dai Viet until his death in 1159.[4]